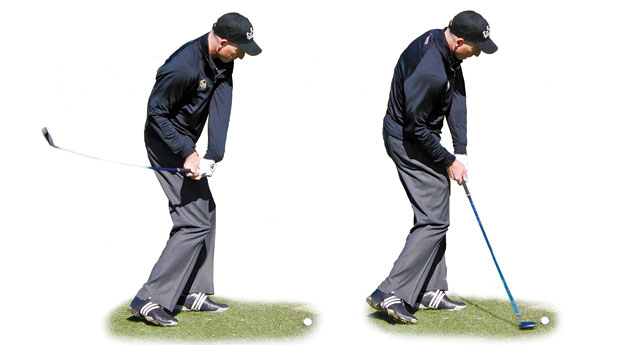 Say what you will about Jim Furyk, the man knows how to play some extraordinary golf using a homegrown swing that’s truly one of a kind. Despite recent heartaches in a handful of big-time tournaments, Furyk remains a fierce competitor on the PGA Tour. He has amassed 16 wins on Tour, including a U.S. Open in 2003, thanks to a swing that delivers more than 70% of his drives in the fairway. How does he manage such incredible accuracy with such an unorthodox swing? Let’s check out a handful of key components of Furyk’s swing and see what makes it work.

1. Furyk is known for the loop in his golf swing, meaning he takes the club almost straight up and away from his body on the backswing, then reroutes the club back to the inside of the target line on the downswing. Notice his vertical top-of-the-backswing position with his hand above his head and his high right elbow. It’s almost as though Furyk uses a little reverse psychology on his golf swing, that is, the more he swings outside-in on the way back, the more he has to swing from the inside-out on the way down. More on that in the next photo.

2. Here, Furyk proves that the backswing really doesn’t matter as long as you’re capable of getting in the right position as you initiate the downswing. Here, he drops the club down onto the plane line by rotating his lower body toward the target while keeping his upper body back. This instinctively helps Furyk reroute the club back onto the right plane. Notice that he doesn’t get to this position by directly manipulating his hands–he uses his body to get him here. Check out that knee flex, too. That’s what you want.

3. Furyk continues to rotate his lower body toward the target while remaining passive with his arms. Notice the lag in his wrists. This is where Furyk develops some extra power in his golf swing. Now, Furyk isn’t exactly a long hitter, but he probably could be if he wanted to swing a little harder. Instead, he swings with more of a moderate tempo. I’d guess this is one reason why Furyk is still competitive despite being 10 to 20 years older than many players on Tour. He doesn’t strain his body like so many others do.

4. Here, we’re at the moment of truth. Furyk’s lower body has cleared (by a whopping 45 degrees) while his right elbow is close to his right hip. Check out how much room he has to swing the club toward the target, which Furyk actually does! Most golfers who swing in a circle immediately swing back toward the inside after impact. But Furyk actually swings more in a line than he does in a circle, helping him hit straighter shots more often. And, when he’s swinging well, Furyk hits it as straight as anyone who has ever played on Tour. That’s why he’s atop or near the leaderboard on tough golf courses, year in and year out.

5. Furyk keeps the clubhead low through impact due to his slight descending angle of attack. His weight is on his lead leg, and all he’s doing at this point is allowing the club to swing down and through. Hard to believe that such a unique swing is actually a pretty effortless one!

6. Furyk’s arms swing past his body as the club fully releases. Check out that extension of the arms.

7. He finishes with his weight on his left side and his arms high, matching the top of the backswing position. Notice how his right knee is pointing toward the target. As crazy as Furyk’s swing may be, the lesson you can learn here is that you need to get the body, especially the lower half, to rotate toward the target. If you hang back and/or don’t rotate, you’ll have a hard time creating the necessary room for the arms to drop in the slot and hit straighter shots. And, by the way, give Furyk’s backswing a try if you tend to swing across the ball from outside-in. You may find it easier to swing from inside-out by looping the club like Furyk does!

Top-25 Instructor Dale Abraham, PGA, is the director of instruction at Desert Mountain in Scottsdale, Ariz. For information, visit daleabraham.com.