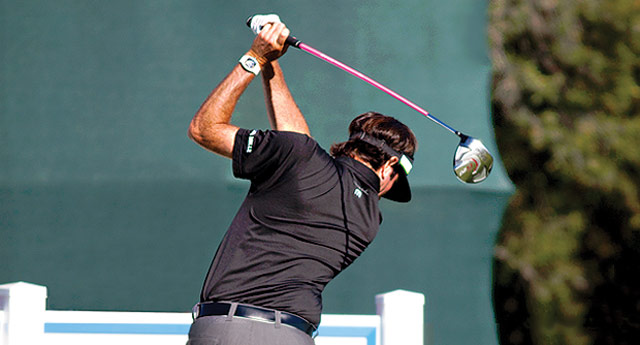 We all know that Bubba Watson is one of the longest drivers on this planet. Listed at 6' 3" tall and 180 pounds, he has a lanky, flexible physique, which allows him to smash it out there. And he does it with such ease, hitting shots that bore through the air and hit the ground rolling forward. What is it about this swing that creates such massive power? There are several reasons why Bubba has such power, and I'll break down two key positions that will answer these questions and give you more insight on what makes Bubba so freakishly long.

(RIGHT)
The first thing that stands out to me is how his front foot comes off the ground at the top of the backswing. Most Tour pros today keep the front foot firmly planted on the ground for stability. Not Bubba. He allows it to come up, which increases his ability to turn his hips, which increases his ability to turn his shoulders. Bubba has one of the biggest shoulder turns on Tour, as you can see here. His back is practically facing the target! Bubba also swings the club past parallel. This allows him to store more potential speed that he will unleash into the back of the golf ball at impact.

(LEFT)
One of Bubba's trademark moves occurs at the start of the downswing. As you can see in the picture, Bubba has a ton of flex in both knees. It's as though he has "squatted" a bit to start the downswing like a power lifter performs a deep squat. This is one of the major reasons Bubba is able to generate so much clubhead speed, which, in case you're wondering, is an insane 128 mph.

Finally, take a look at the big differential between his hips and shoulders. This "separation" is a trademark of power hitters. The more you can separate your hips from your shoulders preimpact, the greater the chance of producing serious jaw-dropping speed. And while I don't expect any of you to swing the way Bubba does, strength-building and stretching exercises both help to maximize your swing turn and place greater torque and separation between your upper body and lower body, driving your swing. Do that more effectively and you'll start seeing longer, more powerful golf shots.

One thought on “Bubba Watson”