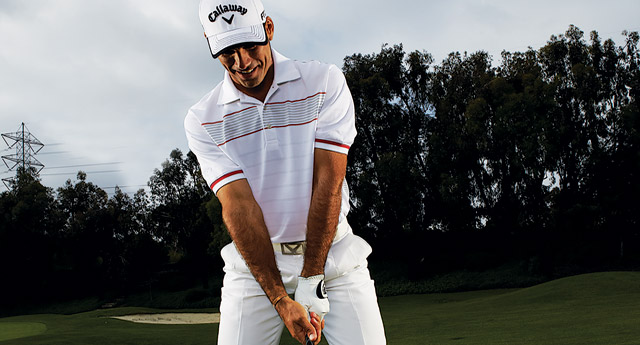 Take a survey of golfers anywhere in the world, asking what they’d most like to improve about their game, and you’ll get the same overwhelming response: They want to hit the ball farther. The most obvious way to hit the ball farther is simply to swing harder (assuming the impact location remains somewhat constant). But deciding to swing harder and doing it can be two very different things–kind of like deciding to be rich and actually becoming rich. However, there are a few specific moves you can make that have proven over time to help increase clubhead speed.

For this month’s Prospective, I’ve analyzed Alvaro Quiros’ swing. One of the game’s longest drivers, Quiros ranked third in distance on the PGA Tour last year, averaging a whopping 309 yards off the tee. Study his swing, apply his moves and start knocking the cover off the ball.

1) STANCE
To create maximum speed, it’s very important that your hips are free to turn on both the backswing and the downswing. How wide you place your feet apart at address has a direct effect on your ability to turn your hips–the wider the stance, the more difficult turning becomes. To promote the most effective hip turn, address the ball with your driver as Quiros does here, so that the inside of your feet are no farther apart than the outside of your shoulders. If you’re not very flexible in the hips, turning your toes out a bit (as he does here) and narrowing your stance will help promote turning.

2) BACKSWING SEQUENCE: Golf is no different than other athletic endeavors, in that the sequence of motion is vital to applying maximum force at the desired time. In golf, the backswing sequence isn’t as absolute as the downswing sequence in regards to the player’s ability to generate maximum speed; however, there is a backswing sequence that helps facilitate maximum speed. You should feel as though your backswing begins with the clubhead moving away from the ball. In other words, your body rotation should begin in response to the clubhead movement, not preceding it. This move will give you the best chance of combining the rotation of your body with the swinging of your arms and clubhead. Properly coordinating your backswing can definitely result in a more powerful downswing.

3) HIP TURN: A lot has been written about the role of the hips during a player’s backswing, but one thing is for sure: If you’re looking to increase your clubhead speed, let your hips turn like Quiros does in the upper left photo on the opposite page. A bigger hip turn on the backswing has two advantages. First, it increases the length of your backswing, and second, it encourages the proper weight shift, which is from the ball of the back foot toward the heel–not laterally toward the outside of the foot, which commonly occurs during a sway. Both these moves that Quiros makes will increase the potential energy stored up during your backswing, giving you the opportunity to generate more clubhead speed on your downswing. Lastly, note how Quiros has maintained some knee flex in his back leg while he has turned his hips. Locking the back leg can actually hinder the lower body from starting the downswing, resulting in a power-robbing, out-of-sequence downswing.

4) WRIST HINGE: Hinging your wrists during the backswing has the same effect as turning your hips: It increases the length of your backswing, which, in turn, increases your opportunity to create speed (potential energy). It’s no accident that most long hitters have long backswings, achieved in part by ample wrist hinge (note Quiros’ full shoulder turn and parallel shaft). And it’s rare to see a short hitter with a long backswing. So, to increase your clubhead speed, go ahead and hinge your wrists. And don’t worry about hinging your wrists at a specific point in your backswing; try to hinge them gradually and in synchronization with the rotation of your shoulders and hips.

5) BEGINNING DOWNSWING: You’ve set yourself up on the backswing to maximize your clubhead speed. Now your downswing will determine whether that speed is realized or not. There’s a real and definable sequence to the downswing that’s best for all golfers, and that sequence is: hips, shoulders, arms and clubhead. In starting the downswing, the hips should move laterally toward the target and begin to turn while the knees remain flexed. When the hips get slightly past their original position at address, they stop moving laterally, but continue to rotate. At this point, the front leg also begins to straighten. It’s this action that allows you to maintain your wrist hinge long into your downswing and release the club with maximum force at impact, resulting in greater driver distance.

6) IMPACT: Impact is the moment of truth, the culmination of events that occurred up to that point. Arriving at a powerful impact means that you’ve shifted your weight onto your front foot while unwinding your hips. Notice how Quiros’ weight is toward the front of his left foot, and his belt buckle is pointing in front of the ball–a clear sign he has combined his weight shift and hip rotation. There’s no spinning off the back foot as is common with slicers and shorter hitters. Another thing to notice in Quiros’ incredibly powerful impact position is how his hands are slightly ahead of the ball and both arms are fully extended–you can’t release the stored-up energy any better than that!

Randy Peterson, PGA, is the director of fitting and instruction at the Ely Callaway Performance Center, where he oversees all Tour professionals’ club fittings and development of club-fitting protocols.

One thought on “Alvaro Quiros”