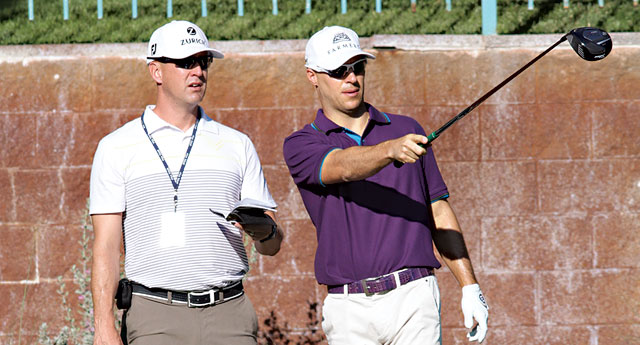 Here’s a collection of tips from the pros, compiled by PGA teacher and contributing editor Rick Sessinghaus.

Nick Watney: Hone Your Impact Position
Nick Watney has become one of the game’s most consistent players. As of press time, he’s 17th in Greens in Regulation and has made 15 cuts in a row. Pretty impressive stuff.

One reason why Watney’s so good is on display in this photograph. Here he’s captured at impact with a very stable left side. His left foot is planted, and his left hip stays over his ankle. Also his left arm is extended. As regular readers of Golf Tips know, the left hand (and for that matter, one’s left side) controls the club’s face, and with a picture-perfect moment like this, it’s clear that Watney has made very solid contact.

To hone your impact position, I suggest using a training aid like the Impact Bag, which you hit your club into. When the club stops at impact, take a look at your impact position. Does your left side look like Watney’s? If so, solid shots are in your future.

Measure Twice, Cut Once
1. Here are a few shots of Ben Crane and his caddie Joel Stock standing on the 11th tee box at TPC Summerlin during last year’s Justin Timberlake Shriners Hospital for Children Open. Crane and Stock are doing what all pros do, thoroughly analyzing the given circumstances that impact their tee shots and approach shots.

The two men were likely measuring the carry distances of all potential hazards (in this case, a few bunkers positioned on the bend in this dogleg left). Crane was also framing his target. That is, he was putting a “picture frame” around the area he wants the ball to land. With those two bits of information, Crane will then make a decision about his shot. And he’ll stick to that decision for his entire swing.

What amateurs mostly do in a situation like this is look at the distance to the hole. They don’t even consider how far they are to hazards. And that often leads to bad decisions that don’t account for hazards that can swallow your ball.

2. In this photo, Crane’s pointing his club at his target. It’s hard to say what it is, but there’s no question it’s a very precise part of the landscape. A tree limb, a chimney in the distance or an edge of a bunker. Pros always identify a precise target. They know exactly what they want and which shot to hit.

Amateurs, on the other hand, pick general targets (an entire tree, a bunker or a wide swath) and hope that their ball will end up in the general vicinity. This lack of detailed focus impacts where their shots end up. The more focused you are on a specific target, the better chance you have of hitting the ball in that direction.

3. Here, Crane is picking an intermediate target between his ball and the target, so he’s properly aligned. From this position, he visualizes his shot, whether it’ll be a slight fade or a draw. In fact, he does it so much that he “sees” its path in the air. He remains focused on what he wants and doesn’t veer from his objective, which is, of course, his target.
Amateurs typically don’t have a set routine. They don’t remain target-focused and they don’t approach the ball from the same way time after time. Often their alignment is questionable as they approach the ball from many different angles and address it with contrasting body lines (for example, their shoulders may aim left while their feet aim right). Also many focus on what they don’t want to do rather than on what they want to do. That is, they picture water hazards when they should picture fairways and greens. Since your brain can’t differentiate between do and don’t (i.e., the thought “Don’t hit it in the water” conjures up images of water), having a negative image in your head often leads to negative results.

Rock Your Putts
Here are two photos of David Duval swinging a belly putter on the green at TPC Summerlin. Over the past year, belly putters have become a trendy fixture on Tour, so it’s worth taking a look at why pros have gravitated to them.

Belly putters make it easier to swing the club so you don’t “hit” at the ball. They limit the chance that you’ll break your wrists at impact–and breaking your wrists leads to a “flipping” motion and inconsistent strikes. In these photos, note how his shoulders have rocked back and forth and how his head and body have stayed centered throughout the motion.

Amateurs often struggle with the exact opposite of what Duval is doing here. They “hit” putts because they change their tempo throughout the swing. Instead of making a “tick-tock” motion like that of a metronome, their rhythm varies on the backswing and followthrough. They also tend to use their hands through the impact area, which causes the clubface to turn and the ball to veer offline.

Practice Swinging With Your Right Hand Only
Wait a minute. Why is Ryuji Imada swinging his putter on the driving range? It might seem a little unusual, but that’s okay, Imada isn’t going to tee off with his blade. He’s just trying to groove his right-arm motion.

Swinging solely with your right arm creates better timing with your body. In fact, good players practice this drill so they don’t get “stuck,” or rather, do what happens when their body outraces their hands and arms. And staying in sync is key to consistent ballstriking.

Other benefits of making right-hand-only swings is that your back elbow stays in front of your back hip on the downswing. This helps keep the club on a better plane. When the elbow gets behind the hip, the club is coming from a flatter path leading to pushes and hooks. The better arm position also promotes a free release, letting the club go, which leads to less tension.

Amateurs, this is a great drill to help you feel as though your arms and body are swinging together.

Practice With A Purpose
We’re all guilty of heading to the driving range and blithely beating a bunch of range balls as hard as we can. But, really, what does this accomplish? The honest answer is not that much.

In this photo, the powerful Aussie, Jason Day, is practicing with a purpose. He’s aiming at a flag and treating his practice session like the warmup for a round of competitive golf. He’s target-focused and trying to re-create the conditions he’d find in the middle of his round.

You don’t need to aim at a flag, but you should treat every shot on the range with care. Just going about knocking a bunch of balls into the range isn’t going to sharpen your skills and, in fact, it’ll likely breed bad habits. When you choose a target on the range, you should also line yourself up accordingly so your body lines and clubface are aiming or parallel to the direction you want to hit the ball. Only then will you start to groove the proper kind of swing.

Point Your Body At The Target
In this picture, it’s of interest to recognize how synced up Keegan Bradley’s different body parts are near finish. Take a look at how his back foot, back knee, hips and shoulders are all pointing to his target. His swing may look kind of wild at times–especially during his whip-like recoil of a finish–but he has a lot of power and remains in control.

The next time you record your swing, take note of what your body looks like in this position. You want to resemble Keegan’s “pointed” look. That is, how your back foot, back knee, hips and shoulders are all pointing to the target.

Maintain Your Posture
Here’s Kevin Streelman on the range working on what I call the “criss-cross drill.” That is, he’s laying a club across his chest and just making backswings. He’s looking to confirm that his shoulder alignment is okay and he’s aware of his posture throughout the motion. This is a great warmup drill and stretch as it reminds golfers to rotate on their backswing and not lift their arms during the actual swinging motion. When you do it, rotate around your spine while maintaining your posture. And don’t lift your arms!

Mirror Your Backswing And Followthrough
One of the fun parts when analyzing Tour players’ swings is to notice consistencies. Here, Brandt Snedeker is demonstrating great positions in his backswing and followthrough that just happen to mirror one another.

At the top of his swing, check out how his clubface, back of left hand and left arm are all on the same angle. This mirror image is a great way to check if your club is on plane. Snedeker is on plane in both his backswing and followthrough.
It’s simple to check this for yourself. You can have a friend record you from down the line and from target (make sure they’re standing on your “toe line”) or you can simply make a swing in front of a mirror.

Keep Your Putterface Square
In the above photo, Tiger is demonstrating how important it is to keep your eyes over the ball, and in the photo at right, Tiger is putting with his left hand. The left hand controls the clubface–in full swings and putts–and getting the clubface back to square at impact is vital if you want to make more putts.

To ensure that your eyes are over the ball, simply take another ball, place it next to your right eye and let go of it. It should land on or near your ball. A drill that will keep your clubface square is to putt with just your left hand. Start with short putts–really short putts–around the cup, then gradually move farther away from the hole, concentrating on keeping the blade square to your line. Once you’ve mastered a few six-footers, return your right hand to the club and stroke some more. Don’t let your right hand take over. Retain the feeling of your left hand keeping the face square.