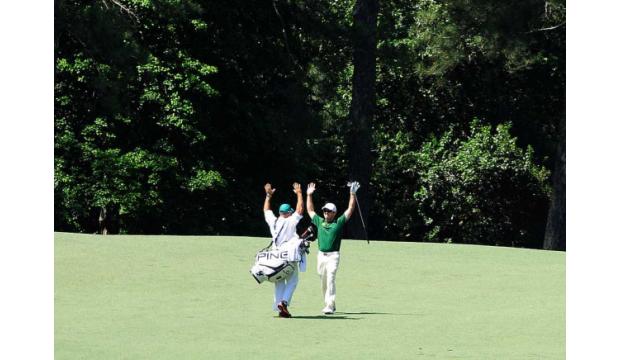 Want to become a better golfer? Sign up for our weekly newsletter, full of tips, advice, reviews and more!

It’s Masters Week, and with Tiger Woods back in contention alongside perhaps the strongest field in a generation, the 2018 edition shapes up as a must-view. Not that most golf fans would miss it anyway. So, to celebrate the year’s first major, we recount a handful of great Masters golf shots from its eight decades of competition — then shows how to hit those shots via great professional instruction from the Golf Tips archives.

One was struck with a persimmon 4-wood, the other with a modern 4-iron, but both yielded the same number — the rarest one, a double-eagle 2, on their respective par 5s.

Sarazen’s “shot heard ’round the world” was easily the most famous strike in the fledgling invitational event that would morph into the most popular tournament in the game, by far. In many ways Sarazen was the first “modern” player in that he pretty much invented the sand wedge and embraced what were then newfangled steel shafts; here he pulled an old-fashioned 4-wood, took dead aim over the 15th hole’s daunting pond and smoked a perfect shot that flew the water, took a couple bounces and dove into the cup. There are no photos of this feat, but it only gains in legend as the decades pass. He went on to win in a 36-hole playoff with Craig Wood.

Oosthuizen’s shot was actually 20 yards longer than Sarazen’s, about 253 downhill yards, but in a nod to today’s supercharged equipment, he used a 4-iron to accomplish his albatross, launching a dead-straight shot that caught the front edge of No. 2’s wide, left-to-right canting green. The ball then began a slow and tantalizing trip toward the tucked-right pin, sliding nearly 90 degrees and following a gentle ridge before falling into the hole at perfect speed. The shot helped Oosty get into a playoff with Bubba Watson, which he lost after Bubba’s epic wedge recovery from the trees on No. 10.

YOUR SHOTS: THE LONG APPROACH

Every golfer is faced with the choice at some point: Go for it in two on a par 5, or lay up for an easy wedge shot? If we opt for the former, nothing is more important than clean contact whether the club in question is a 3-metal or a long iron.

These two instructional articles have you covered in both cases. If you’ve got a the “wood” in your hands, go with Southern California-based PGA teacher Brady Riggs’ simple method for hitting that club with confidence. If it’s a long iron, check out brothers Ron and Michael Castillo, both PGA teachers who offer their five top tips for crisp and strong shots.