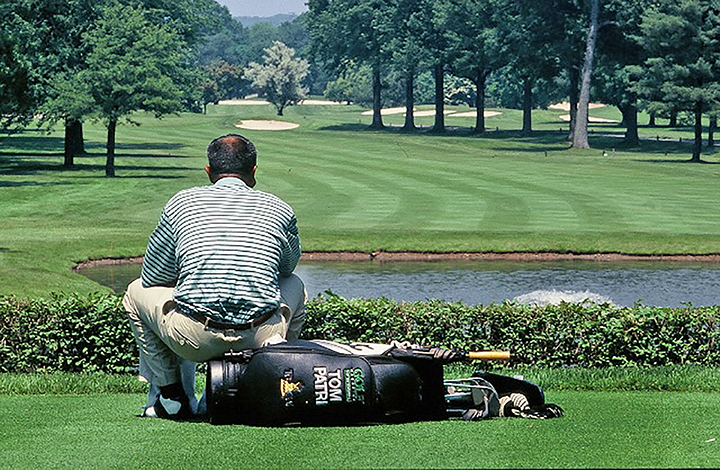 Editor’s Note: Following is the second of six in-depth instruction pieces in digest form from Top 30 instructor Tom Patri’s 2005 book, “The Six-Spoke Approach to Golf.” Tom is one of the most respected teachers and coaches in the game, and we’re honored to add his deep passion and knowledge to the pages of Golf Tips.

Back in the late 1980s and early ’90s, when The Six Spoke Approach was a still being formed in my golf mind, sports psychology — and specifically golf sports psychology — were still in there formative years in comparison to the depth of qualified talents available to players of all skill levels today.

When I begin my journey to learn as much as is possible about what I then called the “twisted coconut” (a head that doesn’t function properly under pressure), names like Dr. Bob Rotella, Dick Coop, Debra Graham, Dr. David Cook, and Dr. Rick Jensen were not exactly household names. That said, their world was about to explode.

My first exposure was a very personal one. I was a young competitive mini-tour player struggling on the now defunct Space Coast Golf Tour in Orlando, Florida. I had just won the NCAA Division ll National Championship. I had started out as a professional making seven checks in my first 11 or so events. Not bad. Then things began to unravel on me. I questioned my ballstriking, I questioned my putting stroke, the way I pitched the ball, and the way I prepared for events. Surely everything I had done while winning several amateur events, college events, and a National Championship couldn’t have all been wrong, could it?

A fellow competitor suggested I visit a sports psychologist. My first thought was, why? I’m not crazy, am I? I had this picture of the good doctor putting me on a couch and asking me personal questions about my childhood while he scribbled notes on a steno pad. My picture was a bit off.

As I investigated the possibilities, two names kept appearing: Dr Richard “Dick” Coop at the University of North Carolina and Dr. Bob Rotella at the University of Virginioa. I contacted Dr. Coop and we set a date. He asked me to meet him at Finley Golf Course, the UNC home course in Chapel Hill. Upon arrival in the parking lot that day I was approached by a middle-aged, ordinary looking gentlemen with a slight limp. He announced, “are you Tom?” I replied yes . He said, “I’m Dick Coop, let’s get started. I’ll grab your bag.” Before I could say a word he grabbed my bag, slung it over his shoulder and was off in a flash for the 10th tee. I quickly threw on my spikes and headed after him. When I caught up with him he said, “you’re gonna play, I’m gonna caddie, and we are gonna chat.”

What evolved over the next two hours was the most pleasant and relaxing nine holes of golf I had experienced in some time, and that — combined with my 3-under-par 33, which seemed effortless — had me loving golf again. Dick had a wonderful ability to both make things that hadn’t made sense make sense, and a unique way of prioritizing things in life, not just my golf. I had it totally backwards.

Years later, as my teaching and coaching career began to grow, I knew I needed a deeper and more more complete understanding of how elite athletes functioned on the mental side. This sent me on another tangent in my overall journey — seminars, some one-on-one sessions, mounds of reading and various videos. Meeting people along the way like Dick Coop, Bob Rotella, David Cook, Debra Graham, Shannon Reece, and Rick Jensen all greatly enhanced my knowledge and my ability to both understand my students and coach them to their own personal level of excellence.

Let me state here, before I continue without mentioning any specific name, one of these great mind coaches once said to me, “TP, if the individual is delusional about who they are athletically or they don’t understand the required effort needed to improve, the greatest swing coach or mind coach in the world can’t help them.” I have had more students then I care to admit who fit this profile. I’m sad to report that my frankness and candor have both driven a few of these folks away from my teaching and coaching and in some cases have caused a few folks to state that, “TP is not a nice guy!” I have always felt a strong responsibility, an obligation to be nothing less than 100 percent up front and honest with every person that comes to my lesson tee as to what is needed on all fronts. Guess what? Some people don’t want to hear the truth. It hurts. As Jack Nicholson once told Tom Cruise, “YOU CAN’T HANDLE THE TRUTH!”

As The Six Spoke Approach was beginning to evolve and it became clear it would in fact become a book, I approached Dr. Rick Jensen. Rick and I shared several students on The LPGA Tour and we had spent time together on several occasions. I came to enjoy his approach to the mental side and its place within the framework of game improvement. Several sports psychologists I had encountered believed and preached they had the answers to all things golf. Rick, I felt, understood teaching technique — and how to tie it into coaching the student in a manner that allowed the student to find a comfort level during a change in technique. Both Rick and I understood that no single entity had the magic answer to complete game development, that in fact the student needed to understand COMPLETE GAME DEVELOPMENT to reach his or her potential. That was exactly my intent in writing The Six Spoke Approach, to provide the student not with classic golf instruction (yes, I do believe in golf’s fundamentals!) but to have the student step outside golf’s standard box and develop a personal blueprint for success.

Rick has always had a strong handle on what I call “The Chicken or The Egg” syndrome. For example, a student would come to Rick looking for the magic answer, claiming stress, lack of confidence and choking was the ill effecting their game. After examination, Rick would in some cases conclude that, yes, the student may in fact be suffering from a confidence loss, for example, BUT that the root cause was poor technique. He would suggest getting the technique under control then, if need be, coming back to visit him. In other words, Rick didn’t mince words when a player was in search of a magic cure when in fact what was needed was hard work on a difficult fundamental issue.

We both agreed that there are of course players who truly need a sports psychologist to help them with things such as anger management, focus and concentration, visualization, stress management, or any other affliction of the player’s mental side. However, often he found that the player has physical issues, poorly fitted equipment, lack of structured practice, or simply a poor technique. In those cases Rick would strongly suggest that the student needed to get his or her house in order first, then come see him.

Spoke 2, when finished for the book, became a dialogue between Rick and yours truly. It was perhaps the most fun Spoke I did for the book, because it allowed me to spend additional time with one of golf’s brightest minds. Rick Jensen is still a dear friend today. He is still a person I reach out to for advice and an expert I send students to for help.

If you’d like to dig into this and the other five spokes in The Six Spoke Approach, the book is available on both Amazon and Kindle.

If you would like advice on with whom or how to start your journey into Spoke 2 — The Mind, feel free to contact me. I would be happy to help steer you in the right direction.

See you all next in the next issue of Golf Tips with Spoke 3 — Game Analysis.

Tom Patri teaches at The Esplanade in Naples, Florida. He also spends limited time both on Long Island, New York and in Maryland from June through October. View his teaching and coaching bio at www.tompatri.com, and reach Tom directly at [email protected] or (239) 404-7790