You’re standing on the tee of your nemesis hole. You’ve played perfect golf up until this point. All of a sudden the voice in your head sounds like Johnny Miller: “It would ruin this perfect round, Rosie, if he chunks this one in the water.” Up until now most likely you have let this voice, your nerves and negative feelings overwhelm you. You feel golf doubt creeping in. Inevitably you chunk the shot and splash! There goes your round.

It is important to understand that doubts and the feelings aroused by them do not occur to hinder you from playing your best golf. In fact, they show up as signals to heighten your focus — and if you reframe them, they can become a way to accelerate you into “The Zone,” allowing you to play the better golf.

Doubts are good! It is as simple as Newton’s Law: For every action there is an equal and opposite reaction. Doubts can either result in a negative reaction or an equal, opposite, positive reaction that you can choose to believe that when a doubt arises. The exact opposite of what the doubt is saying to you is true. For example, negative doubt says, “It would ruin this perfect round, Rosie, if he chunks this one in the water.” Positive says, “He has been striking the ball perfectly all day, Johnny; it wouldn’t surprise me if he hits this shot next to the hole.” The most important idea is that when a negative doubt arises, you choose to understand it as a positive signal to reorganize your thoughts to a positive outcome, which transforms all that nervous energy into to positive adrenaline. Once you have convinced yourself that you truly are going to hit the best shot of your round, now and only now are you ready to hit this daunting shot.

Once you have the aligned to the positive, you transform the negative voice to a positive mantra that you begin to tell yourself as you go through your physical pre shot routine. So in the photo above I'm back there looking at this daunting tee shot (left, the 7th hole at Makai Princeville on the island of Kauai), and I’m saying, “Awesome.” You have to have a routine you can rely on, but instead of just working on the physical — alignment, grip, foot position — you rely on your mental game by coming up with a five-word mantra.

The word “I” is engaging myself. “Choose” is my decision that this what I’m going to do. It’s a statement. Three is “Feel,” which relates to the feel that I have achieved in previous memory of a perfect golf shot that I have hit with the club in my hand; I recall the sensations, the emotions and the memory of that perfect feel. “Target” is the exact spot where I want my ball to end up, and finally “Now” — the action word meaning, “I’m going to do it right now.” During your round, your emotions and nerves are not always at this heightened state of awareness where doubts arise — just as you’re not always in a “fight or flight” situation in life. However, using your mantra during your pre-shot routine will allow you to perform your best on every shot and accept the result. You’ll know that you didn’t allow focus, and committing to your swing and your target, to be interrupted. Be honest with yourself. After a brief analysis you will determine that you hit your best shots when committed fully to the golf shot because you are using this approach to the game of golf. You will enjoy the game more because you will know you didn’t hit a bad shot because you didn’t control your mental game.

Instead of being nervous about it, you’re enjoying it more — and you can hit your best shot without worrying about fatting it into the ocean. 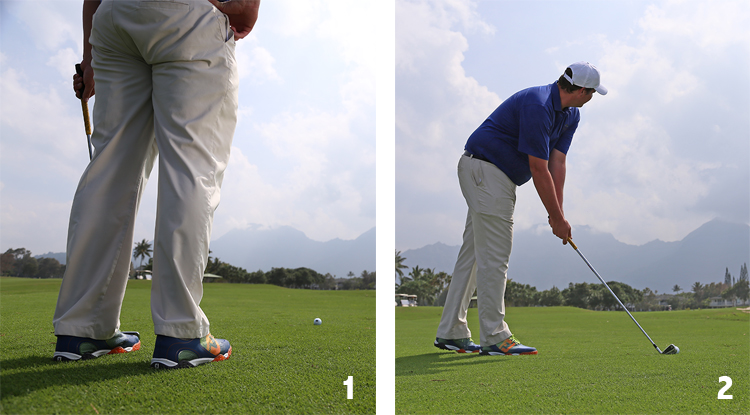 Those nervous energies have now transformed into a deep zone like calming focus as I stand behind the ball and take dead aim (Photos 1 and 2). They’re all positive, I’m pumped, and I’m ready to hit this perfect shot to my exact target Now. (Photos 3-5)

Again, here’s the key: Understanding doubt and nervous feelings and reframing them to be good things.

So now that you’ve built up the pressure — that tingle, that weird feeling — you say, “yes, this is an opportunity to overcome this.” Then you can reframe those negative thoughts into positive mantras, and great shots, time after time.