All golfers are looking to improve and shoot lower scores. That said, each golfer should be very careful on how they go about improving as it’s an individualistic process and many lose sight of that. That’s why I’ve come up with three challenges for better golf.

The best players in the world have showed us that there are hundreds of different ways to see a desired ball flight. It’s not about one way to grip the club, one specific set of alignments, one backswing position, or a specific move in the downswing. The only thing that matters is what the golfer does at the moment of impact.

The majority of the greatest golfers of all time were by no means just relying on athletic ability. They learned how to develop skills, or the ability to produce the desired performance, through their training. These developed skills allowed them to hit the golf ball solid, control where the ball starts, and where and how much the ball curved.

Having a technically sound golf swing by no means guarantees an improvement in performance. There is an aspect to scoring and playing that has nothing to do with how good one’s swing looks. Skills, on the other hand, can have a big influence on how well one can both play as well as score. If more golfers focused on developing skills rather than positions, or getting caught up in “looks,” I believe they would perform at a much higher level as long as they have a solid understanding of why the ball does what it does.

I have developed three skill challenges for my students in order for them to improve their ball control. They are presented in this order: Low Point Control, Club Face Awareness and Controlling the Curve. One must complete the first skill challenge prior to moving on to the next. Once all skill challenges are achieved, the player is given the task of a random mix, and finally a game is issued using the challenges with a point structure in place. 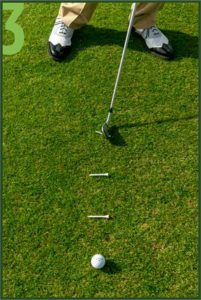 In this skill challenge the golfer must figure out a way to allow for the club to strike the ground forward of the ball with an iron. We start with my 3-tee exercise (Photos 1 & 2) to get feed-back. If done correctly the golfer will strike golf ball first and ground second. (Photo 3)

In this skill challenge the golfer must figure out how to curve the golf ball in the desired direction. Since the club face influences where the ball starts as shown in the previous drill, the movement of the club’s path influences the ball curvature a player gets. That’s what this drill is all about.

Once you’ve completed each skill challenge and you’re satisfied with your improvement, mix in each skill randomly and see how you do. For example, hit one ball at the curve station, move on at the low point station, and then to the club face awareness station. If at any point you fail, restart. Failing is part of the process — embrace it and learn from each attempt. Eventually, see if you can accomplish all 14 attempts in a random fashion without having to restart. You can then revamp the exercises to create your own game that continues to challenge you.