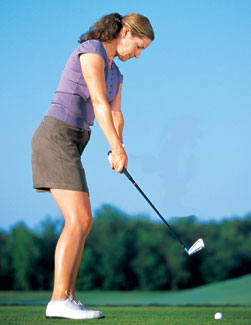 Professional and low-handicap golfers consider the swing plane to be one of the most important concepts in golf. Swing plane directly relates to how straight, high and far one can hit the ball. At the same time, swing plane is one of the most intimidating terms for high-handicappers, simply because they're not sure what a swing plane is, let alone what a good one looks like.

To envision a perfect swing plane, imagine a dotted line drawn from the ball, along the clubshaft and up past the grip. This is your swing plane line. As you execute your takeaway, the club should remain on the same plane angle as your imaginary dotted line until the clubshaft is parallel to the ground, or about one-quarter through the backswing. From here, the club might move slightly above the dotted line as it reaches the top, a by-product of the required lifting action of your arms. Don't worry, this is a natural move!

The natural change of direction from backswing to downswing should drop the club back on the dotted line so the clubhead approaches the ball on the same plane as it was at address. Through impact, the critical rotation of your forearms keeps the club on the line well into the finish. As you can see, the perfect swing plane has a few ups and downs, but adhering to a consistent plane will help you maintain balance and allow you to swing aggressively.

Plane Opposites
High-handicappers, because of poor swing mechanics or misconceptions regarding swing plane, begin their swings by rolling the club away from their bodies on the takeaway, which immediately puts the club under the swing plane or dotted line. From this position, the player can only lift the club to finish the backswing and then come over the top, or above the swing plane, on the downswing. From here, all you can do is hit the ball from an outside path, a major cause of slices and pulls. 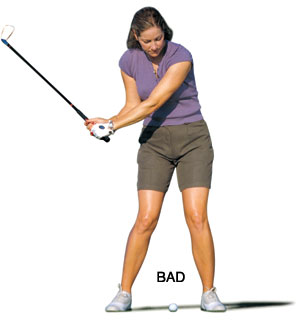 Plane Drill
No one has a perfect swing plane, but good ballstrikers manage to keep the club on plane throughout the critical takeaway and followthrough parts of the swing. Here's a drill to help you learn the correct swing plane once and for all.

With a short-iron, grip down on the shaft so that the butt end of the club almost touches your belly button. As you swing back, maintain the triangle formed by your hands and forearms by keeping the butt end of the club pointing at your belly until the clubhead is just outside your right foot. An early body turn or an early break of the wrists will destroy the triangle and move the club under the swing plane line. If you keep the club pointed at your belly and your triangle intact, your clubface will remain square (as it should) and remain on plane. As a secondary check, make sure that the clubhead lies outside the hands and your right arm sits above the left.

As you start the downswing, drop your arms so the butt end of the club points away from your belly. This is the correct delivery position, where the clubhead is on plane and approaches the ball from an inside path.

If you're ever off plane on the backswing, you'll be forced to throw the clubhead from the top and the butt end of the club will point back to your belly button. This is the exact opposite of what you want to do. From this position, you'll slice, pull or top the ball.