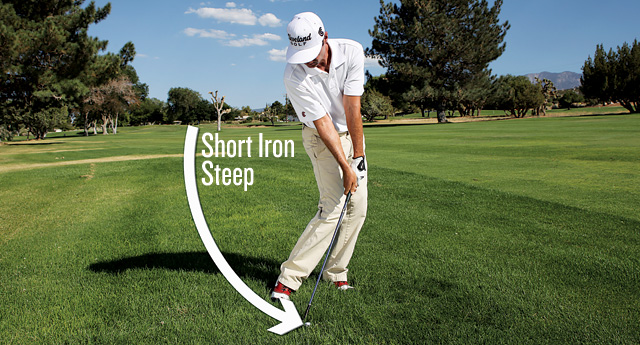 When your ball finds the deep rough like the position I’m in here, the smart play almost always is to take a higher-lofted club and either lay up or pitch the ball back into the fairway. Why you ask?

The shorter the club, the more descending the blow you’re going to have into the golf ball. The longer the club, the flatter the angle you’ll come into the ball. This is the main reason it’s so difficult to hit longer irons and fairway woods from the rough. Because of the shallower angle of attack, there’s too much rough coming into contact between the clubhead and ball, making it difficult not only to get the ball airborne, but also to move it out of the rough.

The right play? Punch it out to a comfortable distance in the fairway, with a high-lofted iron or wedge.

On a side note, because the rough is a lousy place to hit long irons and fairway woods, it’s not an accident that hybrids are designed to be played with a steeper angle of descent. Try hitting your hybrid like a middle to short iron from the rough, and see if it helps you. 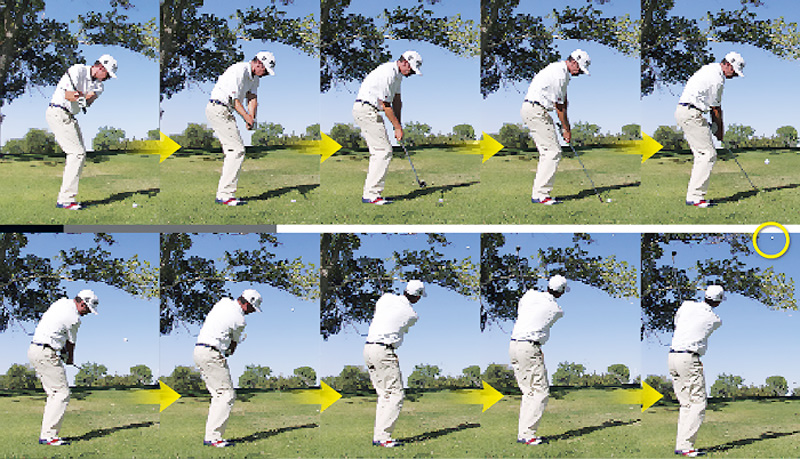 In this scenario, I have two options. I can go over the limbs hanging between the green and the golf ball, or I can go under them. Let’s imagine the pin is on the short side and I need to hit it high and stop it quick. In this case, hitting over the limbs is the right shot.

To hit a high pitch, I like to keep things simple. Address the ball as you normally would with your high-lofted wedge, with the ball positioned center or slightly forward of center. Only now, concentrate on releasing the hands faster through impact. With a quicker release, the clubhead will outrace the hands and add both loft and bounce to the club. Because of this, don’t be afraid to hit down aggressively onto the ball and use the club’s bounce to avoid hitting a fat shot. As for your finish, the shaft should be vertical, as you see in the photo to the left. This is a sure sign of a quick, handsy release through the ball. 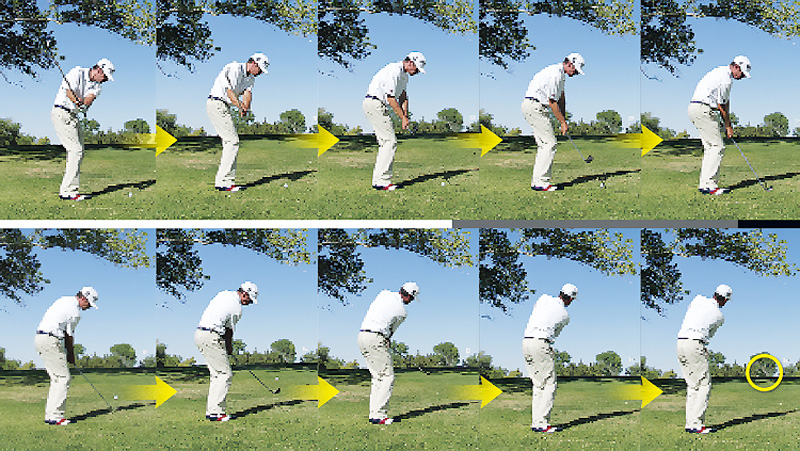 Now, let’s say the pin is at the opposite end of the green and I have some more room to roll the ball. The right play is to hit the ball below the limbs and play for more roll. I don’t really make a lot of changes to my pitching stance and setup. As with a high shot, I play the ball in the center to slightly forward in my stance. Only now, instead of concentrating on a faster release of the hands, I try to delay the release of the hands to help hit the ball lower and with forward roll. I’m not intentionally trying to keep my weight on my left side, nor do I change my impact position all that much (for proof, check out the two sequences and note the similarities). Instead, by delaying, or slowing, the release of the hands, I’ll make contact with less loft and create less backspin. The key is to remember to rotate the body and finish the shot with the shaft below the hands, as you see in the photo to the right.

ALIGN TO RIGHT
Just because you found the fairway, that doesn’t guarantee you’ll have an open shot into the green. In this case, I need to hit a draw around a tree to have any chance at a birdie. To start, align your clubhead as you normally would: right at the target. As for your body, aim to the right. The face will look closed, but trust you’re setting up correctly.

RELEASE THE HANDS
To hit the draw, the hands have to release, and the clubface has to close through the shot. Notice how the shaft is parallel to the ground? Now look at the clubface. It’s facing down, further indicating I’ve hit a draw/hook effectively around the tree.

SWING ALONG BODY LINE
The key here is to trust your alignment and swing out to the right! Don’t feel as though you need to tug the clubhead back to the left. Because the clubface was square to the target (and closed relative to your body line), a draw is imminent. Swing along your body line and be ready for a right-to-left ballflight.

ALIGN TO LEFT In case I need to hit a big fade or a slice, I’ll need to do the exact opposite of what I did when hitting a draw. Aim the clubface at the target, and align the body left of the target. This will effectively open the face relative to your body line, helping you to not only hit a fade, but hit it higher, too.

DELAY HANDS
To hit a good fade, the goal is to delay the release of the hands and hold the clubface open (relative to the body line) through the hit. The key to doing this? You have to keep rotating the body! Look how much more my body has rotated here vs. the draw swing. This is what you want to achieve in hitting this shot.

SWING ALONG BODY
Once again, swing along the body line, not the target line! Don’t let fear keep you from rotating your body and swinging to the left of the target. Also, when you do set up to hit this shot, take one more club than usual, since fades from this setup fly shorter and higher than do normal shots.

Tough bunker shots require tough practice! To hit a high and long bunker shot, you need to activate your hands and whip the clubhead through at impact. In the sequence below, notice how my hands are cocked and, just before impact, they release and make contact with the sand and ball. Through impact, my hands release, but I retain the extension of my arms. That’s what you want to help hit better, more consistent bunker shots from farther distances. 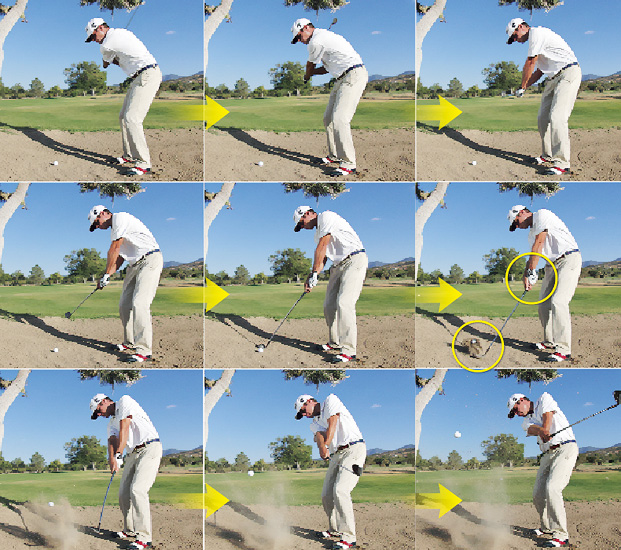 ROTATE!
Just because you’ve found a divot in the fairway (life just isn’t fair, is it?), the shot isn’t lost. The trick is to remember that effective ballstriking requires a full rotation through the shot. In the case of the divot shot, play the ball back in your stance to help encourage a steeper downswing. Just remember, the steeper you get, the more critical it is to rotate the body. If you get steep and don’t rotate, you’ll hit it fat and probably off line. Instead, swing with confidence and rotate through on the downswing.

Bobby Hinds, PGA, has developed a golf instruction curriculum designed to help all golfers become better through applying instruction that’s easy to understand and execute. For more information, and to book a lesson, visit www.bobbyhinds.com.