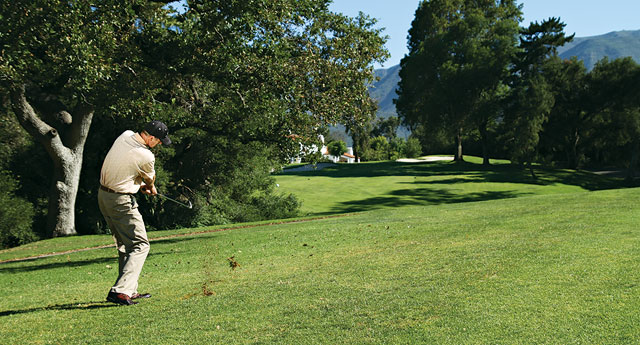 A typical 6-iron has a loft of 30°, which places it between your pitching wedge (48°) and driver (approximately 9_¡). This mid-iron position makes it one of the game's most versatile clubs. And versatility is what this article is all about.

On the following pages, I explore six different ways you can use the six-iron. Some are slightly unorthodox, while others you may be familiar with, but in the end, I hope you realize that this one club can be your new go-to stick when you find yourself in numerous tough predicaments.

As you can see here, I've got a really bad break. I pulled my drive just a bit and ended up in the left rough with the limb of a California oak between me and the green. To advance my ball toward the 18th green here at Ojai Valley Inn & Spa, I've got to keep it low and curve it from right to left. While that might sound daunting, it's not too difficult to pull off if you set up correctly.

Now, while I'm using a 6-iron for every shot in this story, it's important to remember that depending on how high your obstacle is, you can use any club from a 3-iron to a 9-iron to punch out. I've determined here that a 6 is the perfect club for the job, but practice this shot so you know exactly how high the ball flies. (This is also a great shot to play when faced with a headwind.)

To pull it off, play the ball back in your stance, so it's a couple of inches off your right foot and choke down a couple inches on your grip. Choking down a couple inches on your grip and pressing your hands toward the target so there's some forward shaft lean delofts the club and helps keep the trajectory low. Swing smoothly with an abbreviated backswing and followthrough. To add a little hook spin to your shot, move your hands to a little stronger grip position and allow your arms to release or roll over on the forwardswing. This also helps advance the ball even farther as hook spin produces an end-over-end roll.

Play 9 Holes With Your 6-iron

As per the rules of golf, we're allowed to play with a maximum of 14 clubs, so why would I advocate playing nine holes with just your 6-iron? Well, for one thing, the 6-iron is a very versatile club. You can use it around the green, out of fairway and greenside bunkers and on many par-3s. Have to punch out from under a tree? The 6-iron is often the best stick for the job. But it isn't just its versatility that lends itself to a quick nine holes. It's a mid-iron club that can be hit with pretty decent distance, too. In fact, if you hit your 6-iron 160-170 yards, I bet you can reach many par-4s and 5s in regulation with it. From there, all you need are two putts for par.

The most important lesson from playing with just a 6-iron is how creative you'll be when you don't have a typical shot to play. Consider that Seve Ballesteros grew up playing golf with just a 3-iron. Being so limited in his club selection improved the Spaniard's creativity and likely made him one of the game's most inventive players. Limit yourself to just one club and you'll be amazed at what it does for your imagination, too!

Fade It, Draw It, Hit It Straight

Course management is one of the game's least talked about skills–but one of its most important. How a player manages his or her game can make the difference between shooting a personal best and having an average day.

Check out the above photo taken on the 18th hole of Ojai Valley Inn & Spa where I teach. The pin is cut below the chimney of the white building. There are two bunkers guarding the green, and as you can see, there's more room to the right of the flag than to the left.

Based on where my ball ends up in the fairway, I want to hit it straight, draw it or fade it. From the left side of the fairway, I'll draw it. This takes the left bunker out of play. When I'm in the center of the fairway, I'll hit it straight (or with a slight draw), and if I'm on the right side and slightly blocked by that large tree, I'll hit a little fade to take the branches out of play. Of course, standing on the tee and knowing the pin position helps me determine exactly where I want to hit my drive so I have the best chance of hitting it close on my second shot.

To hit a 6-iron out of a fairway bunker, you first need to be in a sandtrap that doesn't have too severe a lip. You also need a pretty clean lie.

While the 6-iron does go pretty high, it's certainly not as lofted as a sand wedge, and because you'll be pretty far away from the green, you'll need to catch it clean to get the most distance. Again, setup is key here, so implement the following components to ensure a good escape: Play the ball slightly back in your stance and place about 60% of your weight on your left side. Open your stance slightly to create a little more of a descending blow and keep your lower body quiet throughout the swing, but especially on your backswing. To ensure you don't lose too much distance, hit the ball first, then take a divot and continue swinging into a full finish.

Expect to lose about 5% to 10% with a fairway-bunker shot, so if you normally hit your 6-iron 160 yards, select it when you're 150 yards out. Also if you make really crisp contact, you'll see the results on the green. Your ball should stop on a dime.

Get Up and Down

Here's an unorthodox play from a greenside bunker. Typically, you'd want to use a sand wedge or pitching wedge from a bordering sandtrap, but in this case, with the pin far away, I want the ball to release and run out toward the hole. By using my 6-iron, I ensure that the ball lands without much spin and rolls the rest of the way to the cup. (Warning, this shot should be practiced a bit before trying it on the course!)

Before you attempt this shot, make sure the bunker has very little–if any–lip. Too high a wall and you might hit it into the bank and end up with another shot from the kitty litter. Also make sure you have a good lie on soft sand. Hardpan, wet sand or "fried eggs" will make this already advanced shot more challenging. Open your clubface and stance, place about 60% of your weight on your forward foot and hit a couple inches behind the ball–that's a must!

Note in the photos how open my face is in my followthrough and how much sand I've taken. You absolutely must remember to do both these things if you're going to be a successful greenside bunker player–no matter what club you use!

When you're near the edge of the green, you have a good lie, and there's plenty of room for the ball to roll, the 6-iron is the club you want to chip with. It'll keep the ball low so that it's in the air for 20% of the time and rolling 80% of the rest. As you already likely know, it's much, much easier to control a ball that's on the ground than one that's in the air.

To ensure that you make the proper contact, place the ball in the back of your stance, and your hands forward. This delofts your 6-iron even more, ensuring that the ball stays low. By placing weight on your forward foot, you also help to make a downward strike into the back of the ball. That descending blow pops the ball up and onto the green and gets it rolling right away. A narrow stance encourages less lower-body movement and thus better contact.