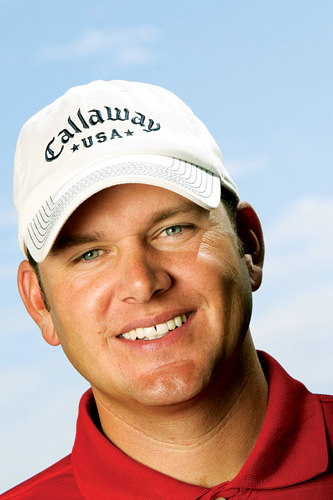 Better iron play requires solid and consistent fundamentals. If you watch the best players in the world, and factor in the heavy pressure and stress they face during any given round, you'll notice that the players with the soundest fundamentals are the players who rise to the top of the leaderboard come Sunday. Often, I see players who can hit their short irons well but struggle with long irons, or players who are better with middle irons than they are short and long irons. Either way, the most common reason players lack consistency through the iron set is a lack of sound fundamentals as they adjust to each club. Too often players try to change up their swing with each iron, thinking, because they're of different lengths and lofts, they need to swing differently. Wrong! In this section, pay attention to the basics, and learn what elements of the golf swing work with just about every iron in your golf bag. While basic positions may subtly adjust, the golf swing should stay the same throughout the entire bag.

Set the grip, turn the hand, squeeze the club. It's that simple! Gripping the club properly with your gloved hand means gripping the club in the right sequence. I've seen students actually do this in opposite order, where they squeeze the club first, then set their hands, which then sends the grip all out of whack. Instead, first lay the grip along the second knuckle of the index finger and just below the point where your little finger and palm meet (as I've indicated with my pen). Then, while holding those pen points on the grip, rotate the hand so the V formed by your thumb and index finger point somewhere between your right cheek and shoulder.

From there, squeeze the grip so your hands are secured, but not tensed up. If you look at my knuckles, you'll see my most comfortable grip shows two dots (I also dotted each knuckle with a pen). One dot showing indicates a weaker grip, three dots showing is a grip that's very strong. As for what works best for you, go ahead and experiment to find out. Just be sure to follow the proper grip sequence, and once you settle on a grip position that's optimal for you, stick with it. If you're constantly changing your grip, you'll have no chance at becoming a consistent iron player.

A trigger finger can help you better engage your golf swing. What's a trigger finger? John Daly, for instance, as well as several other top players use some separation between their index finger and the rest of their grip as a trigger to help sustain proper grip pressure and assist in better hand rotation and in preventing the club from slipping too far into the palms of the hands. Give it a try and see what a trigger finger can do for your feel and overall swing.

Keep your posture the same for your iron shots. There has been much said about having the need to adjust your posture for different iron shots, but in reality, what should change is the distance you are from the ball, not your posture. Here, I'm holding a long, middle and short iron to demonstrate how much spine angle (the amount my upper body leans toward the ball) and leg flex remain constant. Although not showing, in addition to the ball moving farther from my body with longer irons, the ball position also will move slightly closer to the target (relative to my stance). This will add a small amount of tilt to my shoulders with longer irons, but my posture and spine angle will stay the same.

Leave room so your body can swing. You don't hear much about this one, but the distance between the club and your body also should remain consistent with every iron in your bag. I like to use a hand's width, which in turn frees up some space to enable my body to rotate and my arms and hands to swivel and release through impact. If my hands are too far from my body at address, they'll be too far at impact, making the production of consistent shots a tall order. Conversely, if your hands are too close to the body, your swing will be constricted and your arms won't have the room they need to do their job. Keeping a gap between the body and the grip of the club not only will make you more consistent, but will boost your power as well.

Where you are at this point in the swing is critically important. Check out this layered photo. Sure, my body is in the same position, and so are my hands. But, if you look at the clubhead, things are drastically different. Controlling the clubface requires keeping the clubface as square to your arc as possible. Did you catch that? I said square to your swing arc, not to the target, your body, the sky, etc. The one clubhead facing toward the ground is extremely closed, which, depending on my downswing, will result in either a severely pulled or hooked shot. The clubhead that has the toe way up and even a little behind me is viciously open and will require a ton of rotation to prevent a nasty sliced shot. For the right way, see the next page.

Keep your clubface square to your swing arc. What that means is, because we swing on an arc that's tilted (because you hit from the side of the ball, not on top of it), your clubface actually closes (relative to the target) on the backswing and opens up through impact and into the finish (also relative to the target). If that's too much to digest, consider this: The proper clubface angle at this position on your backswing is slightly closed, but square to the swing arc. It also should parallel your left arm, as mine does in this photo.

If you've been trying to point the toe up at this spot, you're doing it wrong! Practice this position with a mirror and get your clubface square to your arc. Use your arm as a guide when practicing.

Swivel, THEN release. You've probably heard a lot about releasing the hands, and you may have heard how better players are able to release their hands faster than average players. Hmm, too bad that isn't true! Touring professionals and low handicappers alike don't release their hands as soon as you might think. The reality is, they know how to SWIVEL their hands through impact BEFORE they release their hands.

What's a swivel? Simply put, it's the rotation of the hands through impact. Look at the sequence on the opposite page. I've swiveled my hands before releasing them (releasing my hands means allowing my forearms to cross like you see on this page). By swivelling first, I can maintain a better extension of my arms, which usually indicates more power and control. If you try to release the club too soon, you'll likely hit a lot more fat and thin shots, not to mention shots that veer left or right.

Practice in slow motion and swivel the hands to square the clubface at impact before you release, which should happen once the arms reach waist high on the followthrough. If you do this, you'll not only learn how your swing should look, but also feel a sense of power and consistency you probably haven't had before.


Stay on plane, before and after. Some players, like Jim Furyk and Fred Couples, can get away with having extremely upright backswing positions, only to reroute the clubshaft back on plane at the peak of the backswing and into the downswing. But, for most of us, we're much better off trying to keep on plane during the backswing and forwardswing. To get on plane, check your position at two-thirds of the way into your backswing and see if the shaft points toward the ball. If it points away from the ball, you're too flat. If it points between you and the ball, you're too upright. Get the butt of the grip pointing toward the ball (it doesn't have to be precise), and concentrate on keeping this plane consistent by avoiding any extra droop or bend in the arms and hands. 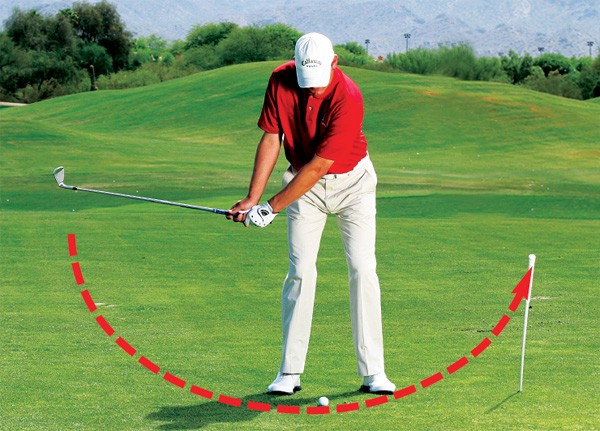 A quick drill to learn how to swivel. Are you still reeling over my advice on swivelling before you release? If so, try this simple drill. Position a stick or a club to your side, as I've done above, and practice some knee-high to knee-high swings, focusing on squaring the clubface with your body rotating as it should and also by swivelling your hands. As the body rotates and the hands swivel, you'll see there's less need to try to force the hands to release and flip over.

In fact, flipping the hands too soon is a common problem for better players who either stop rotating the body or who don't swivel their hands. As you pitch the ball forward, let the club nick the shaft or stick you have in the ground. Check to see where your clubhead is facing (it should be square or slightly closed, and your body should be rotated as mine is). The shaft in the ground marks the point where I should release the hands. Also, watch how the best players in the world can extend and release with such vigor. Next time you tune in to an event on TV, watch Tiger (as if you aren't doing that already), and pause your DVR after he hits. His arms extend as well as anyone's, further proving he swivels before he releases.

One thought on “Master Your Iron Play”