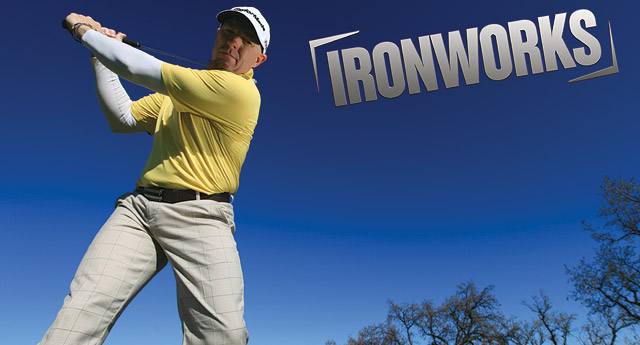 Better iron play is at the heart of game improvement. It's the center link of the golfing chain, and without a strong link in the middle, playing your best becomes an arduous, if not very frustrating, task. In other words, you may be capable of hitting great drives, but they really don't mean much if you can't hit the green. Second, hitting the green is one thing, but hitting the ball closer to the hole is the real secret to shooting lower scores. I've put together a few of the most common faults I see my students make pertaining to iron play. Each tip is designed specifically for the player who already has a mastery of basic iron fundamentals, but is struggling with a few particular faults. Does that sound like you? If so, read on and get ready to start shooting lower scores.

Normal Setup
A normal setup, when the wind is not blowing, looks just like this. The feet are shoulder-width apart, the shaft is leaning slightly toward the target, and the body is in a relaxed, athletic position.

Windy Setup
When the wind blows, no matter which way, it's generally best to play a lower, more controlled shot. This means adding more shaft lean to-ward the target at address, and a narrower stance. This will help you get to your left side sooner on the downswing and cover the ball through impact.

The Knockdown
In windy conditions, basically what you're doing is hitting a knockdown shot. This is a lower, less-spinning iron shot that isn't as susceptible to ballooning in the wind as a normal shot would be. But it's not just a shot for windy days. A knockdown is a great option for distances in between two clubs, or if you need to hit a controlled shot under a tree.

Beat The Wind
To hit successful shots into the wind or facing a crosswind (go ahead and swing away as normal when hitting downwind), remember two key factors. First, keep the hands ahead of the ball at impact. This is what I meant by covering the golf ball on the previous page. Not only will this produce a lower shot, but a slower release of the hands ought to reduce spin, as well. Second, finish with the hands in a lower position. This will help you hit down and through, as opposed to down and up, which might add loft to your shot.

Hit It Higher
The simple solution to hit a higher shot is to change clubs in favor of an iron with more loft. But what if you need to add a higher trajectory to all your iron shots? Instead of fixating on ball position, weight shift and/or rotation, consider the following advice to hit higher shots.

Start by taking a look at the position of your hands at the top of the backswing. If you have a flat wrist, where the back of the hand is flat (or near flat like mine) with the forearm, odds are that you tend to hit your irons on the lower side. To add height, consider cupping your wrist (see inset photo) more at the top of your swing. A cupped wrist will open the face more at the top of your swing, as well as at impact, causing your shots to fly higher. Just remember, a cupped wrist also promotes a fade, so be sure to aim more to the left and be ready for some left-to-right ball movement.

Play Sidehills Correctly
When faced with an uneven lie, the key for a successful result is to examine how the ground will affect the flight of your golf ball. Let's look at how by using a couple sticks. The stick on the ground is pointed directly at my target. The other stick is put into the ground, perpendicular to the slope. Now, here's what you need to know. The stick in the ground, perpendicular to the slope, represents the direction in which my ball is likely to fly if I aim directly along the target line. The more sidehill, the more the shaft will lean and the more likely my shot will veer away from the target line–even if I set up perfectly square to the target line.

The fix? In this case, play for some added draw on the ball. Close your stance a bit and play the ball a ball or two farther back in your stance.

The slope will still cause you to swing from the inside and produce a draw, so be confident in your decision. Just remember to always look at the slope and, if you need to, stand behind the shot and draw an imaginary line perpendicular to the slope. That's the direction in which you should expect the ball to fly. Be sure to compensate by aiming in the opposite direction. And in case you're wondering, this strategy works just as well when the ball is below your feet, too. When that happens, squat more, play the ball forward and make a full finish.

Why You Thin It
Okay, here's the real reason you hit thin shots: You aren't getting off your right side through the shot. It's not from scooping the ball, or trying to hit up on it. In most cases, it's as simple as not finishing on your forward leg. Practice coming to a full finish on your forward leg (your left), and you'll stop hitting thin shots.

Why You Hit It Fat
A fat shot and a thin shot are quite different. Chunks aren't from not shifting to your forward side as much as from a swing that's both too steep and, often, from outside in. In this sequence, the club is coming down too steep into the ball. Ouch!

How To Hit It Good
In this sequence, compare the first two photos to the first two in the above sequence. Here you see I'm swinging not only on a flatter plane, but also from the inside of the target line. This is key for better, longer iron shots.

Hit A Hybrid
Even with good mechanics, it's still difficult to hit crisp iron shots from the rough. Hybrids can make matters easier, thanks to their big, flat soles and deep CG weighting schemes. The trick is, don't get wide with your hybrids either. Stay narrow in the rough and hit down on the golf ball. If you try to scoop the ball with an iron or a hybrid, you just won't get good results. Stay steep!

Escape The Rough
Hitting from the rough is never fun. It's one of the few places on the golf course that requires you to alter the way you normally swing. And in case you're wondering, that doesn't necessarily mean swing harder, and many of my students assume you should. When golfers try to swing harder, they usually take longer, wider swings, which actually makes matters worse when you're in the long stuff.

The solution is to steepen your downswing with more wrist hinge, not swing harder. This means adding more hinge at the top and more lag through the hit. You can still have a wide backswing, but the downswing has to be narrow. The result will be a steeper, more descending blow into the ball with less grass interference. Try this the next time you're in the rough. Add more hinge in your backswing and add lag on the forwardswing, as you can see in the photos below. I bet you'll hit it farther than if you try to muscle the ball out of the rough.

Draw It
The new style of play is to hit everything straight and right at the target. But that doesn't mean you won't encounter instances on the course where you need to shape the ball. To start by hitting a draw, I like to make my changes in the swing, not in the setup. So set up as you normally would for a given iron shot. As you swing, the key is to swing low to high. By low, I mean the clubshaft should remain below the shoulders on the downswing. By high, I mean the hands should finish high. This will help you swing more from the inside of the target line and put draw spin on the ball. Just don't inhibit the hands from releasing through impact. If you do, that draw will turn into a dead push. If you think low to high, the ball will fly high and with a smooth draw.

Fade It
To hit a fade, again set up to the ball as you normally would. Only now, we're going to do things in an opposite fashion. In this case, think high to low through the shot. This means, the hands are in a higher position at the top of the swing and into the downswing. Low refers to where the hands finish, which as you can see, is significantly lower than they are with the draw shot. The key with the body is to keep rotating, since with a high-to-low swing, you'll be swinging more from outside the target line to back inside the target line. Body rotation is critical because you need to stay ahead of the hands. If you don't, you'll hook it. Think high to low and watch that ball fly with a gentle fade.

Brady Riggs, PGA, is one of the most popular and sought-after instructors in Southern California. For more information and to book a lesson, visit www.bradyriggs.com.

One thought on “Ironworks”