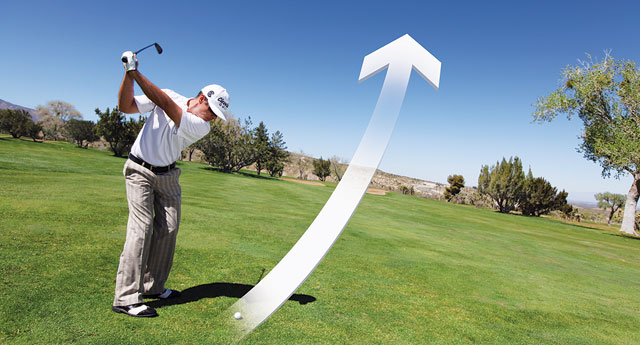 LET"S MAKE THINGS EASIER, shall we? In today's age of golf instruction, there's more information than ever. Seems there are countless right ways, and countless wrong ways, to swing the golf club. In this case, I want to reduce the iron game to its simplest, most easy-to-understand level. The goal here is to get you making smooth, controlled swings that enhance your natural abilities. With these tips, you'll be on your way to making better swings and shooting lower scores, all without having to dig too much into the mechanical side of things.

First, setup and impact positions are very different. Often, I see some of my higher-handicap students make half-practice swings, where they start at the setup, make a backswing, and slowly bring the club back down to the setup again. What a mistake!

Think of the setup as a starting point. The body should be flexed, the arms relaxed, the ball positioned just before the lowest point on your swing arc. Once you master a solid setup like mine, here's what you need to know about both:

At impact, there are three parts of the body that look much as they did at setup–your head, your shoulders and your left arm. Everything else changes due to the rotational movement through the swing. If you try to hit from a setup position, the hands will collapse through the shot because you stop rotating. Instead, if your body keeps rotating, you can better mimic a good impact position where the hips are open, the shoulders are square, the shaft is leaning toward the target and the hands are over your left leg. Remember, whatever you do, don't try to hit from a setup position. That never works!

WATCH YOUR TAKE AWAY

If there's one problem that plagues better players more than higher-handicappers, it's swinging too much from inside to outside the target line. To make things easier, consider this: It's okay to make a downswing from inside the target line, but if you exaggerate it too much, you run the risk of getting the club stuck too far behind you. This can lead to not only some big pushes to the right, but also a few dreaded shanked shots. In the photos above, you can see that if I swing too much to the inside, my shaft is off-plane at the top of my swing and too far across the line. I might hit the occasional decent shot from here, but only if I manipulate my hands through the swing and flip them over in time to square up the clubhead. That's really difficult to do repeatedly.

To fix the problem of swinging too far to the inside, you don't necessarily have to take the club straight back. The key is to take the club back in a way that you get to the top of your swing on the right plane. If you look at the lower set of photos, you can see that the butt of the grip is pointing in front of me at the top, as opposed to behind me, as seen in the upper photos. This position is a better on-plane position, making it easier to swing through on the proper plane. So experiment with a backswing that allows you to get into a good position at the top of your swing. And by the way, through the shot, there's no need to force the body to swing "to the outside" of the target line. The right path for every club is to swing from slightly inside the target line, to on the target line at impact, then back inside the target line.

How you take the club back affects how well you'll be able to swing the club down and through on the forwardswing. I see a lot of my students swing their middle irons as though they're short irons. They lift them up and swing with a narrow and steep backswing. And while your middle irons are designed to be swung steeper than your long irons, you should still swing them with a long, fluid motion–not a quick, steep motion better suited for a short iron or wedge shot. The key is to descend into the ball, but not as steep as you do with a short iron.

Second, as you take the club back, don't hinge your wrists too early in the takeaway. This will make you too steep at the top and make hitting your middle irons more difficult. Finally, take a look at the last two photos in the sequence above. The second to last is the top of my backswing, and the last photo is the first move on my downswing. Can you see the difference? A good downswing is initiated by a slight bump of the hips toward the target, and not from swinging the arms down. Try this bump the next time you practice. And don't forget to swing your middle irons a little flatter than you do your short irons.

What happens when you release your hands too soon and stop turning through the shot? In most cases, this is how and where the dreaded "chicken wing" comes into play. Not only can this position hurt you physically, but it also makes hitting solid shots nearly impossible. If you don't turn and you release too soon, the only direction the arms and hands can go is straight up. That means a lot of topped and bladed shots when you finish here.

One of the best new training aids I've seen in a long time is the Tour Striker. It's made to help golfers strike the ball with a descending blow (preventing a chicken wing), and does wonders at producing instant feedback if you don't. After all, hitting down on the golf ball, and making a divot on the target side of the ball (not behind it) is key to straighter, longer hits. The Tour Striker helps me do just that. tourstriker.com.

I like to think about where I want to be when I finish every shot. When it comes to short pitch shots from less than 50 yards, I like to finish with my body turned toward the target and my clubface facing the sky. This helps me better gauge distances, spin and trajectory. All I have to do is swing a little faster to change my distances. The key? Rotate, rotate, rotate. The body needs to turn all the way through the shot!

If I had a nickel for every student I've seen in this position after a pitch, I'd be a very rich man. Because the body stops, the hands flip over, the clubface closes and the ball goes who knows where. Just because it's a short shot, that doesn't mean the body shouldn't rotate. Think of short shots as mini full swings, not long putts!

Want to stop the chicken wing and make a better downswing rotation? Stick a glove under your left armpit and swing. If you can hold the glove through your swing, you're doing a better job at rotating both your body and your arms. If not, and the glove falls, you're stopping your body rotation and your arms are separating through the shot. That's a no-no!

To monitor how well your transition into the downswing is going, try the Pump Drill. Simply take the club back and down, but stop when the hands reach waist high. Check and see if you still have a good wrist cock and the clubface is parallel with the back of your gloved hand. Your right knee should already be bowing in toward your left leg at this point, too.

If you really want to make contact from your setup position, set up with an impact position! This is a great way to train the body to remember what it's like to feel the proper impact position. Start with a simple setup, then simulate impact, then make a full swing. Odds are you'll swing more freely and get a better feel for a good impact position in no time.