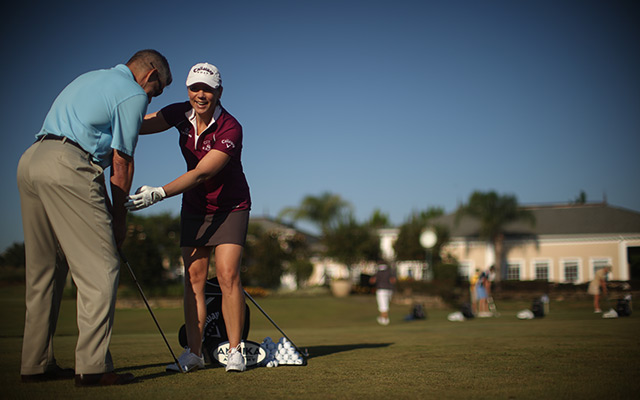 Annika Sorenstam never does anything halfway. She's all in, all the time. Seven years after sinking her last competitive putt on the LPGA Tour, she remains one of the biggest and most respected names in golf, overseeing a growing business empire that encompasses everything from apparel to wine, course design to financial planning. She's also a wife and mom, and in every area of her busy life, she's as focused, balanced and hard-working as she was during a professional golf career that puts her among the best female players ever: Eighty-nine victories worldwide, 72 on the LPGA Tour, 10 majors, eight Rolex Player of the Year awards, six Vare Trophies for low scoring average and more than $22 million in winnings. Impressive indeed.

Winning is the Annika way, the only way. Luckily for golfers who aspire to her level of excellence, she and a top-notch crew of teachers – including her sister and fellow LPGA veteran Charlotta, longtime personal coach Henri Reis and fitness trainer Kai Fusser – have distilled the essence of her formula for success into the Annika Academy, a boutique golf school based in Orlando, Florida, with several satellite schools slated throughout the year in places like Lake Tahoe, Chicago and South Carolina. None of its four levels of three-day sessions (an abbreviated one-or two-day visit is also available) accepts more than eight students at a time, with no more than four students per instructor. So if Annika herself is onsite, you just might get a personal lesson from the only woman to fire 59 in tour competition.

I've learned how to balance my life, she told Golf Tips during a recent late-summer break. I spend time there October through April, at least a day a week, either with guests or with our team. In the summer it's more sporadic, since they go on the road and I'm involved in some and some I'm not. It's all about making the most of it while I'm there. It's something we're very proud of.

It all came about in 2007, as she was preparing to hang up her LPGA battle spikes. The background is I worked with Henri Reis, my swing and workout coach, and we enjoyed working together, and thought, 'Why not share our philosophy with other golfers who want to reach their potential. We have a model here.' My role would be to play golf with them, talk about the mental aspect of the game, have lunch and share stories. That's what our brainstorming session was all about.

Annika, Charlotta and Reis set to work coming up with a framework that would turn the quest for better golf into much more than a series of mechanical, time-tested lessons that some more traditional golf schools might stick with. They help guests develop not just better play and practice habits, but a new life plan they can follow in their own way and take back to share with family, friends and fellow golfers.

To be a good golfer you have to do more than hit a 7-iron and make a putt, Annika says. Clubfitting is important, course management, nutrition, the mental aspect – it's a holistic approach in a boutique-type setting. I've traveled around the world to some beautiful places, and these are things that I like – I want it to be private, personal, and feel like it's me. We have my trophies, my coaches. It's like a second home. That's how we all started.

Adds Charlotta, who runs the academy's day-to-day operations, We don't just teach golf, but fitness as well. One lady lost over 100 pounds, and has stayed there, so that's pretty cool. It's not only changing golf swings, but changing lives and attitudes about life – living healthy and to the fullest. Of course there's handicaps lowered, club championships won or tour qualifyings one, making it on the LPGA and so forth. Most academies have that. But I love it when you change somebody's attitude about training, attitudes, fitness. 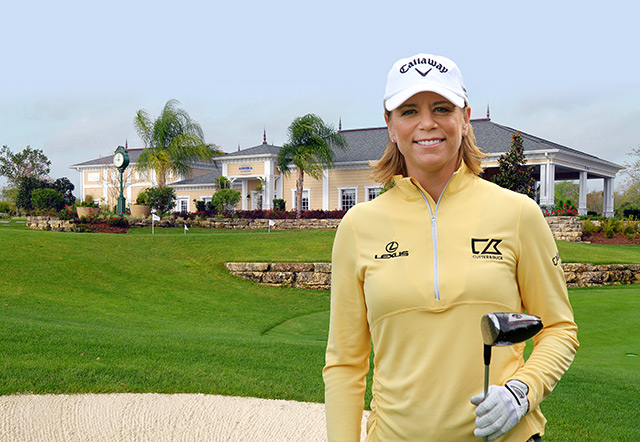 A successful player on the LPGA and European Tours in her own right, Charlotta has been part of the academy from day one. She remains in charge of all programming for the Orlando school and takes part in most road academies as well. Nearly a decade running the school has led her to a new appreciation of what it takes to be an effective teacher and, more importantly, learner.

Like most instructors will say, it's all about the fundamentals, but also trying to make it basic – explain it in a way that you understand it yourself. I've been a student, I know how it is to stand there and listen, but also to perform at the same time. It's also important to be able to modify the lesson to the student – their learning ability or capabilities, but also the time frame you have. It's about being able to adapt to the student. Not everyone will react the same way or sync the same way. That's the tough part about being an instructor.

All Annika Academy instructors have access to a litany of key drills that, through trial and error, can be geared to each individual guest's tendencies and needs, how they process information and synthesize it into something that will guide them into the future in a productive way. It's personal, and that's the point. We want it to be personal, Annika says. If you have eight, you can divide them into two groups. Four will get a quick fitness session, the other goes to the range to learn the basics, then we switch. Then one group will do chipping, the other putting. Then the next two days we go on the golf course, four and four.

A big highlight of the Annika Academy's top-of-the-line three-day tour, aptly named the Soren-Slam, is nine holes of golf, lunch and a clinic with the Hall of Famer herself; with the Major it's a clinic and lunch, and the Platinum offers lunch only with her. The most popular program is Championship, which features Annika's team of instructors. Whatever program a guest chooses, he or she – it's about a 50-50 male-female split these days, Charlotta reckons – will get a brand of instruction they can't get anywhere else.

What I offer is a big part of it, Annika says of the higher-end options, but my coaches help me. I've been with Henri since I was 16, Kai for 15 years now, and there's my sister. It's a close-knit family with a passion for what we have. A lot of schools have bigger programs as far as more people, but they might not have all the components we have, such as clubfitting and nutrition. When we started nobody offered fitness as part of their golf schools seven years ago. Some focused on short game and other lessons. We do all of those things, then take them on the course and discuss course management, and we do it in a boutique setting. And another unique thing is we take it on the road. That makes it fun. 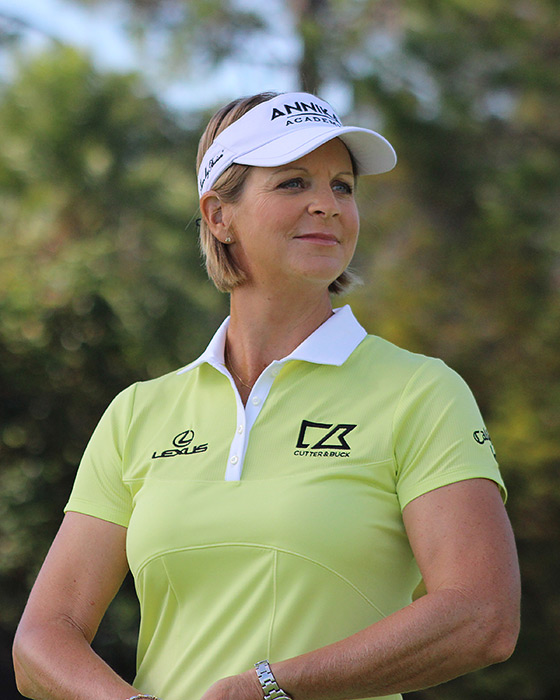 Before folks even arrive in Orlando or wherever road stop the choose, they fill Annika's team in on where their games stand, and where they can stand to improve. The biggest want: Length off the tee. No big surprise there.

They want distance. We send out a form – their golf today, how much they practice – so we can set up their expectations, too. How long they've played, injuries, their goals. Distance is the main goal, consistency is another. Some are more specific, such as bump-and-run. But they want more distance, especially women. When we get to 50 or 60, we lose muscle mass, and it seems like all clubs go to the same distance. That's why clubfitting is important. We see a lot of women who just inherit their husbands' old clubs, and they're too heavy, the grips are too thick, so they just swing with their arms.I t's hard to get any leverage or rotation. We work on getting the right clubs in their hands.

We also work on getting the right grip. So many people grip the club in their hands rather than their fingers, so they can't hinge in the backswing. We get them to relax to generate that power. That happens with 50 percent of their guests or more. A lot of it is, the longer you want to hit, the more you use your arms, and there's less rotation – so it goes shorter and shorter, and you get madder.

The deep desire for distance among students, men and women, won't abate anytime soon. That doesn't stop Annika, Charlotta and the entire teaching from working hard to leave everyone with a more fulfilling, well-rounded game to take home and keep honing throughout their lives. And that includes the oft-overlooked short game, especially putting. Annika won a lot of money and hardware with the flatstick, and she makes sure her guests know it.

Overall, people spend so much more time on the range than on their short game. They want to see long, big hits, then head for the first tee. Most don't know the speed of the greens when they go out. They haven't had a chance to make a putt. And they focus too much on line, and not enough on speed. I play in a lot of pro-ams, and we say, 'Oh, there's this break here, it's a ball right,' and then they hit it 10 feet by. That's why speed is so important. People three-putt because they hit it halfway or too far past. If you can get it in tap range, you don't have to spend so much energy on three-footers. That's a lot of energy over 18 holes. Technique is important, but if you don't have feel on the greens, it doesn't matter.

In the end, what does matter in an effective golf school is giving people the tools and attitude to put golf in its proper perspective – as a lifelong pursuit powered by passion, joy and friendship. We have a slogan: 'Friends for Life,' says Charlotta. We stay in contact them with them, and them with us.

And like any good teachers, the Sorenstam sisters keep learning, too. I have learned that it takes time, for anybody, Annika says. It's really a complex game, so we try to simplify it as much as possible, stay to the fundamentals. It's not until you become a single digit that you start talking about clubhead speed, ball speed – people are too technical. Just focus on the basics. Because it is a hard game. I've been playing since I was a little girl, and I've learned some things, but this is a hobby for people. They don't do this for a living. Focus on your strengths and don't see all the negatives.
Play simple golf.

For a look at Annika's favorite drills and the Sorenstam sisters' philosophy on golf, pick up the Winter issue of Golf Tips magazine at your local Barnes & Noble, or subscribe here.