If you polled a combined group of PGA Tour Players and a deep list of the very best golf instructors, asking them to list the top 30 Golf Swings from 1970 to present, the great Jack Nicklaus might not make their list. Poll the same two groups as to the greatest Pre-Shot Routine of all time, and Jack would easily be No. 1.

The Pre-Shot Routine is a cornerstone of my teaching, and I feel strongly it is a must-needed skill to teach and coach the recreational player. Let me be clear: to be a great player, an EXACT, repeatable, and clearly understood routine, every single time you attempt a golf shot, is an absolute must.

The Pre-Shot Routine can be individual in design to fit the needs of a specific player. However, there are definite fundamental and essential things it should in fact address and accomplish.

Let’s discuss several of the things I like to I teach and coach every one of my students who need to establish a sound Pre-Shot Routine.

I believe one of the main purposes of a Pre-Shot Routine is to establish a solid cadence. This allows the player to stay in a rhythm never getting too fast or too slow. Untrained players often unknowingly speed up after a bad shot due to the anxiety they experience. Likewise, they sometimes speed up after an exciting shot or birdie. Conversely, they think that after a bad shot  they should “slow down.” In fact, neither is correct. Simply stay in your routine.

I remember being at The Buick Classic at Westchester Country Club one year, sitting in on a session watching David Leadbetter work with Nick Faldo – using a stopwatch and counting steps from behind the ball to establish a time formula to take to the course.

I often ask my students what they think is the No. 1 most common trait among world-class players. Of course, I get a boatload of answers, mostly of the mechanical, in swing-type. After they have exhausted their thoughts as to the possible answers and I have continuously shaken my head, they then exclaim, “so what IS the most common trait?”

I look them straight in the eye and calmly reply, “they are boring …they do the same exact thing every time.”

Of course, I’m referring to their Pre-Shot Routine. In other words, the players I generally like the most are the ones you show up to watch midway through their rounds and you can’t tell if they are eight under or eight over. You watch them closely and their cadence from shot to shot is identical. Again, Jack was the master of this skill.

As you peruse the photos in the article and read the captions, these are the exact steps I have taken when preparing to hit a golf shot for the last 40 years of my life, without exception. I worked extremely hard at this during my playing days as both a college player and then during eight years playing professional golf.

In this regard, Jack was my model. It seemed his routine kept him in a protective cocoon, shielded from the surrounding pressures of professional golf. While players around him lost the rhythm, deviated from their less-structured routines and crumbled, Jack cruised on home to collect the hardware.

Now I want to be clear that we are all individuals, and no two routines are exactly alike – nor need be. That said, I want to dis-cuss that one part of all routines that I refer to as “The Critical Juncture.” This one area of the Pre-Shot Routine is in fact critical, because it is at the moment in time when so many parts of the “launching pad” are established and come together.

As you walk toward your shot and you turn the corner to first face the ball (making your body perpendicular to the target line), that’s when all of the following must instinctively fall into place:

I continually talk with my students, pleading with each of them to make one of their goals to become a set-up expert. Build a Pre-Shot Routine that is your very own, making absolutely sure it gets you into a sound launching pad condition. Own your routine and never, ever violate it.

Once you do, in fact, own a solid repeat-able Pre-Shot Routine, so many of those silly lost shots you hit during your round will simply go away. 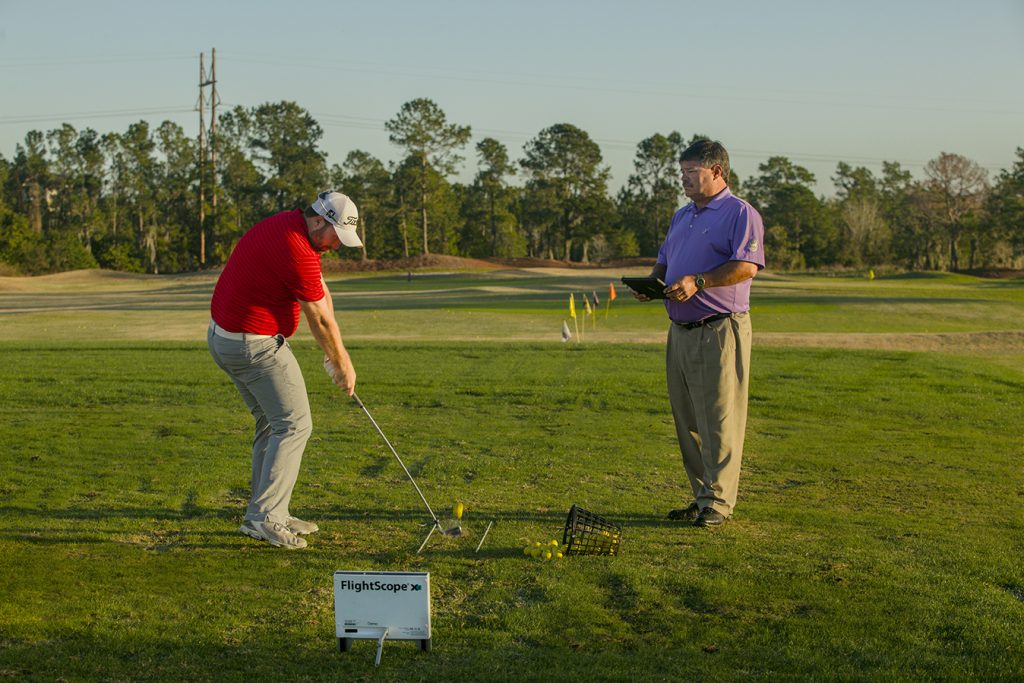