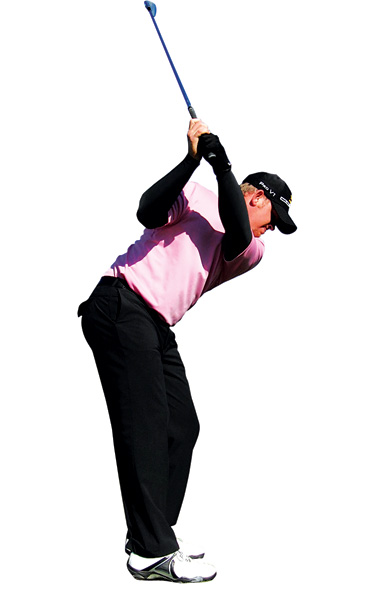 They may not know it, but several of the best golfers in the world are actually darn good instructors. They may not articulate their moves verbally, but in watching them play, there’s a lot that we as wannabe-Tour pros can learn and pick up from their amazing abilities.

We chose a few Tour professionals to spotlight (you can learn something from literally everyone on the PGA Tour), and with the help of some of our popular instructors, we put together a few simple, easy-to-digest elements of their swings that you should incorporate into your golf game. And while no two players swing exactly the same (yes, even Adam Scott and Tiger Woods have differences), one thing holds true: Every one of these featured Tour pros can teach you something about becoming a better player. With the help of Rick Sessinghaus, PGA, as our model, get ready to turn your swing into one that’s Tour-worthy. Read on!

STACK YOUR IMPACT POSITION TO THE LEFT
Take a look at Boo Weekley and Vijay Singh at impact. I can’t help but admire how well both pros compress the ball against the clubface and then hit the ground with their iron shots. They’re rock-solid at impact and stacked over their left side.

Another key component to a solid impact position is the positioning of the body. Check out the spine, and note how it tilts away from the target. That helps them stay behind the ball. At the same time, at least 75 percent of their weight hovers over their left leg. This weight shift is vital in order to release the golf club at impact effectively.

Finally, look at the back of the left hand on both players. The glove logo is facing the target. This ensures a square clubface and a straight shot.
–John Stahlschmidt, PGA


ADD WIDTH FOR MORE POWER
At only 160 pounds, Camilo Villegas averages a whopping 291 yards off the tee, making him among the top 40 for drivers on Tour. He’s often depicted as a muscular player, but in reality he’s a small-framed guy with great definition. Now, are his muscles his power source? Nope. Villegas understands width and how it builds power. His strong muscles are a bonus.

Check out how far he keeps his hands from his body in each photo. From a physics standpoint, by adding width, he’s increasing his arc, which leads to a faster clubhead speed. Combine that with how nicely he winds his upper body and still allows his lower body to be stable, and you have a recipe for a smashing drive. He’s wide, flexible and in perfect balance. If you can copy that, you’ll be huge!
–Jeff Ritter, PGA


MAINTAIN THE FORWARD LEAN
Two of the best players still in their 20s on the PGA Tour, J.B. Holmes and Anthony Kim understand completely what it means to maintain a forward-tilting spine angle through impact. Also, notice the separating of the hands from the body. By maintaining the forward upper-body lean, the arms/hands have more room to store lag and eventually release over the golf ball. If these angles are lost, it’s because the spine is upright, which if it happens, will translate into poor consistency and lousy ground contact.

The last thing you can learn here is their head positions. They’re facing the ball! Don’t feel like you need to keep your head down or lift it too far up. Keep it facing the ball, and you’ll rotate more effectively.
–Derek Nannen, PGA


HOLD THE FACE SQUARE TO THE TARGET
One of the best ways to get your chips going in the right direction with a consistent spin and trajectory is to practice like Rory Sabbatini. Here, he’s working on holding the clubface square through impact. Sabbatini does this by concentrating on rotating his body to slow down the release of his hands. This not only holds the face square longer, but it ensures the ball pops off the clubface in the direction of the target. It also adds more loft and spin, two things you want.

Notice how Sabbatini does it. His form is a little unusual, but his shoulders really rotate through the shot. Most golfers would use their whole body to rotate since it’s easier, but the effect is the same: To keep the clubface square, you have to rotate the body to make it happen.
–Jeff Yurkiewicz, PGA

SWING DOWN AND TURN
Many amateur players tend to make hitting hybrids more difficult than it actually needs to be. The reality is that hitting a hybrid effectively requires you first to acknowledge that a hybrid isn’t a wood–meaning you don’t need to feel like you ought to sweep or scoop the ball to get it up in the air. If anything, a hybrid should be played more like a middle iron, with a downward thrust into the ball.

Check out Parker McLaughlin. He’s hitting a hybrid club effectively by hitting down on the ball (as evident by the divot in the air) and also by making a full rotation. These are two swing thoughts every golfer should have when hitting a hybrid. Don’t hit up or sweep. Hit down and make a divot after you make contact with the ball.
–Karen Nannen, PGA


POST UP YOUR FORWARD LEG
Check out Mike Weir’s tremendous ability to load and pivot against his right leg (which would be our left leg for righties). This sometimes is referred to as posting up the forward leg and building a strong pivot point to snap the club through at impact. If his forward leg were to buckle, slide or overstraighten, Weir will lose stability and, as a result, lose both a lot of distance and consistency.

Also notice how much Weir’s hips have cleared through impact while still staying behind the ball. (He could hit a home run over the Green Monster at Fenway with this swing.) Practice bracing your forward leg so it’s a strong lever to rotate your body around and release the club. Think of a home-run hitter knocking one out of the park
–Rick Sessinghaus, PGA

FINISH STRONG WITH A FULL ROTATION
If you watch any crime scene show on TV, you’ll notice that most mysteries are solved by going backward from the end of the crime first. In the golf swing, a similar approach can be taken, first by looking at the finish. In these two photos, Hunter Mahan and Nick Watney show a lot of similarities, even though one player has hit an iron and the other a wood.

Notice how both players finish solidly on a firm left side. This indicates they have fully turned and bumped their weight to their left side. Also, look at their shoulders. They’re both facing left of the target, also indicating a full turn. Point is, the golf swing requires you to turn all the way through and not stop at the ball like many amateurs do. Practice your finish position, and use these two guys as models. You’ll see better results.
–Hank Gardner, PGA GT