Let me start with an SAT question. True or False: Jack is wearing a red hat and Jack is a boy. Wearing a red hat makes you a boy. The answer is obviously False, but if you replace “red hat” with “lag” and “boy” with “long hitter,” everyone would unanimously say true. Jack has great lag in his swing and is a long hitter. If you have lag, you are a long hitter.

We all know the word: “Lag.” It’s the label given to the angle between the left arm (in a right-handed golfer) and the club shaft in the downswing. The smaller the angle, the more lag you’re said to have.

This has been the gold standard in golf instruction for as long as I have played, 35 years. The problem is this is fool’s gold.

I know the previous statement will elicit reactions that would include, but not limited to:

The truth is I have a lot of lag and finished second, first and second during a three-year stretch in what’s now called the World Long Drive Championship.

I am now a golf instructor and all I see and hear all day long, on the Internet and on ranges around the world, is an obsession with lag and holding lag. The simple fact is no one has been able to find a correlation that more lag equals more distance or accuracy.

The counterpoint seems obvious. Good players and long hitters have more lag than hacks and short knockers. that is plainly true, and it now seems I have contradicted myself.

Now that everyone is thoroughly confused and back to questioning my knowledge, intelligence and sanity, I will now make you better golfers.

Lag is a result of a properly executed golf swing — and speed creates lag, not the other way around. So in turn, lack of lag is a SYMPTOM of something wrong with the swing and the lack of speed.

Lack of lag, “casting” and other derogatory terms of similar meaning are in fact, not swing faults at all. They are necessary compensations. The brain wants to hit the ball, and will do so at all costs. If you put your body and the club in a position where having lag will cause a shank, deep divot, or even whiff, the reaction is to dump the lag.

THE LACK OF LAG

Here are some of the faults that CAUSE lack of lag. 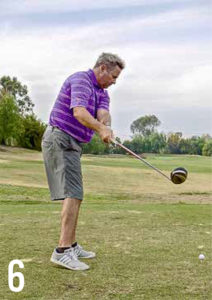 So, in these examples, loss of lag is a necessary evil in order to actually strike the ball with a minimum level of decency. Just creating or holding lag in these situations would actually create poorer results.

Speaking of holding lag, a question for you physics experts. Can I get the club to move faster by releasing the angle or by holding it? And is any human strong enough to actually hold that angle intentionally? To the non-physics experts, the answer to both is no.

The truth is you’re supposed to release, dump, throw the lag. The problem is when it happens too early (Photo 6). It happens too early as a result of the three faults listed above … as well as others. In 10,000 lessons I have yet to see someone not have lag because they weren’t holding it.

The key to getting more lag is to let it happen by doing the opposite of the above scenarios. Move the body in a more correct way where the retention of the lag angle would produce the more advantageous results.

You can’t copy Sergio Garcia or Ben Hogan to get great lag. You’re not built like them or swing like them, nor would you want to. What are the odds you’d produce all of the exact same movements?

One of the reasons golf can be so difficult is it often defies logic and often works in the exact opposite manner that logic dictates. It is an action-reaction movement with forces often working in opposite directions, cancelling each other out and making it look like nothing is happening.

I often get people to have more lag and shaft lean at impact (the actual important movement) by telling them to throw it away on purpose.

“Feeling” like you throw it away on purpose often speeds up the trail arm — then the body reacts by rotating faster, which in turn, maintains lag longer. That was what I tried to do on my winning blasts in the World Long Drive Championships. Photos 7-10 show what I’m talking about — the lag packs much power when the body leads.

So, finally, here is your tip. Forget everything I said after “Hello.” It’s is all completely useless in making your game better. Don’t worry about getting great lag. Find someone who has some good ideas to help make your swing better, or just say HULK SMASH!

Oh yeah … have more fun and stop worrying what your swing looks like in a meaningless still frame. Trust me: The people telling you you’re doing it wrong have worse swings than you.