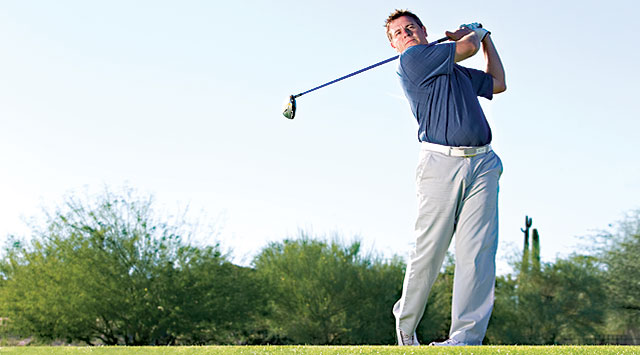 With the advent of swing-analysis apps for laptops, smartphones and tablets, it’s now easier than ever to record and analyze your golf swing. Unfortunately though, sometimes seeing what your patented “magic move” looks like can be a little humbling. While it may be a reality check to see your swing in pictures and video, don’t let it discourage you. Rather, look at it with a critical eye and determine where you need to improve.

But what exactly should you look for? A lot. So over the next few pages, I’ve written a handful of tips that break the swing down into five sections: the backswing, transition, halfway down, impact and followthrough. With each component, I’ve included specific tips and positions that you should try to emulate. Study my swing, compare it to your swing and improve!

It’s fair to say that some of the game’s best players have unorthodox backswings–think Jim Furyk and Sergio Garc__a–but I don’t recommend emulating them. (Despite their unusual backswings, both men still get back to great impact positions.) A proper golf swing should be one that delivers the club back to the ball on the right path, and to do that, it’s best to start off on the right track.

In these eight photos, the Golf Tips photographers captured my swing at four different points. As you look at the photos and read the corresponding commentary, keep one thing in mind: economy of motion. Notice how compact my swing is and how few moving parts there are. Take that philosophy with you to the practice tee. Focus on one area and isolate it. Then record your swing and see how your positions start to hopefully mimic mine.

After you’ve completed your backswing, it’s time for the swing’s most important move: the transition. While some instructors advocate a slight hip bump toward the target, I tell my students that the first move of the downswing is actually a slight dropping of your hands and arms, as if you were pulling a chain. (See photo above.) Once you’ve done that, then your hips and body should rotate and make a slight lateral move forward and toward the target. While this happens, your legs and feet should also be driving forward onto your left side. A weight transition is taking place, and you should be trying to shift about 80% of your weight onto your left side.

Note the photo below where I’ve cast the club. Doing this–flipping my wrists to start the swing as if I’m going fishing–is how most amateurs start their downswings. You can see here that I’ve used my small muscles instead of my big muscles to drive the swing. But this move only leads to outside-to-inside swings with which you’ll cut across the ball and produce a weak slice.

Although I wrote earlier that I want you to first start your downswing with a slight move of your arms and hands, remember that from there, it’s vital that your hips, body and legs rotate and drive forward to the target. That and only that will yield powerful, solid contact.

When your downswing is halfway between the top of the backswing and impact, it’s important to make sure that your club is on plane. Although it takes less than a second to reach impact, let’s freeze the camera, so to speak, and take a look at this important position. For one thing, I’ve attained it only by correctly unwinding my body, and I’ve reached this point because I’ve concentrated on my target. Being target-focused has helped me to unwind at a rapid pace. There are no thoughts in my head at this moment other than hitting my target.

Impact is the moment of truth in every golf swing. I want everything in my swing to return to my address position, except my hips, which have cleared. My shoulders are square to the target line, my left side has cleared, and the shaft and hands are slightly in front of the ball, creating a slightly descending blow with irons and fairway woods and a slightly ascending blow with my driver (at right). At this point, it’s important to be aware of your hands. They should be moving passively, i.e., not “flicking” or “opening.”

It’s important to continue turning to the left until you come out of your spine angle and into a full finish. All too often, I see amateur golfers nearly stop rotating at impact and continue swinging the club. Doing this causes them to flip their hands and try to time their swing rather than let the body continue to rotate into the finish.

Keep moving to the left so the club remains in front of your chest and on plane, as you see in my swing above. Roughly halfway into the followthrough, the butt of the club should be pointing to your “prime rib.” Also, the right hand should be extended as though you’re in a “shaking-hands” position.

The ingredients of a full finish include your right shoulder pointing at the target and nearly all the weight on your left side. To double-check that you’re finishing correctly, hold your position for five seconds. It’ll help balance your swing, too!