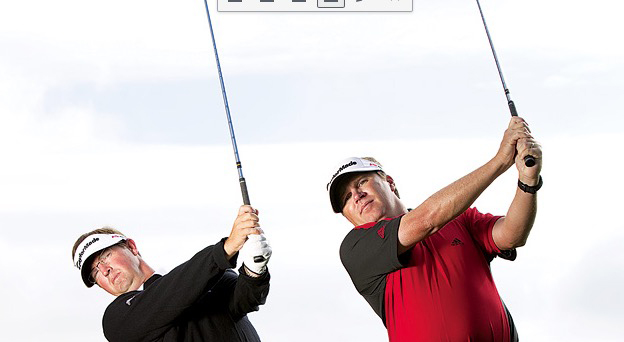 Editor’s Note: When this story ran in Golf Tips magazine back in 2010, the stack & tilt phenomenon was in full flight, with PGA Tour pros like Mike Weir and Aaron Baddeley singing its praises. While both of those players have pretty much faded from the scene, the fundamentals of Stack and Tilt still remain in many teachers’ arsenals, and some prominent players from the past, including “Mr. 59” Al Geiberger, swear by its tenets. It’s just known by other names these days.

“I have picked up on this system that has a funny name. Stack & tilt,” Geiberger told Golf Tips in April 2017 during the Haggin Oaks Golf Expo in Sacramento, California. “All the good things all the good players do, they [teachers Mike Bennett and Andy Plummer] have condensed into their book. Throw all of your other books away, including mine. And if you don’t like to read, watch their videos.”

So, to follow Geiberger’s lead, let’s take a fresh look at the Stack & Tilt method.

Indeed, 2010 was a very good year for Stack and Tilt gurus, Mike Bennett and Andy Plummer. Their premier student, Charlie Wi banked $1.5 million, and three others (Bill Lunde, J.J. Henry, Alex Cejka) finished 1, 2, 3 at the Turning Stone Resort Championship in August. (Even more remarkable has been the turnaround of Lunde who had quit golf three years earlier. The San Diego native rebuilt his swing with Bennett and Plummer, notched three top 10s and banked over a million bucks in 2010.)

We caught up with Bennett and Plummer at last fall’s Justin Timberlake Shriners Hospitals for Children Open in Las Vegas to get a firsthand look into their controversial methodology. What we found were two soft-spoken, bright men with what they say is a measuring system that every player fits into. As Bennett told Golf Tips, It’s a thoroughly mapped-out set of variables and principles, but ultimately because it’s a system, it can start at its lowest denominator and increase in sophistication for the amount the golfer wants or needs. In other words, it’s applicable to pros and beginners. If you’re looking to overhaul your swing for 2011, read on.

1. EXTEND AT IMPACT!
Andy Plummer: One of the biggest differences between the game’s poorest and best players is how they extend (or don’t extend) at impact. The legs straighten and the spine extends, pushing the golfer off the ground. This is the swing’s power source.

Mike Bennett: The spine is flexing and extending continuously through the whole swing. Your address posture is not static throughout the swing. As most golfers swing through, they stay in flexion and their body stops turning, their arms start flexing and, as a result, they don’t hit the ball far.

Plummer: Because you can’t turn in flexion. If one tries to, his or her hips will stop turning. Some folks write that off as a flexibility problem. In fact, there’s a whole cottage industry that has sprung up with people getting soft-tissue massages because no one has taught golfers how to extend through the ball. Unfortunately now we’ve got lots of golfers who think that the golf swing is really difficult and that they have to be in such good shape to do it. We believe that point of view damages the golf-instruction industry.

2. EXTEND TO TURN
Bennett: These pictures illustrate how the body must extend to turn. It’s that extension that also functions as a power source.

Bennett: Most golfers think that they need to maintain their spine angle at impact. But we say you’re supposed to maintain your inclination. Your spine angle constantly changes its flex during the swing so that you can have thrust and keep turning. Andy often tells students in clinics to tuck your hips underneath you when you finish, or rather to raise your hips up when you finish.

Plummer: All athletes make this motion. Think of volleyball players spiking it over the net, or a gymnast doing a back flip, or Kobe dunking a basketball.

Plummer: A shot-putter goes from flexion into extension. All these athletes extend. The same motion is demonstrated in a variety of sports where your body generates any sort of thrust.

3. EXTEND, TILT & TURN
Bennett: The above pictures illustrate how, in the backswing, the spine angle changes. The spine goes into extension so that it can turn. The spine keeps tilting to the left the longer your backswing gets so that your head doesn’t raise up from the ground.

Plummer: Golfers don’t stay bent over when they swing back–they extend. But if they only extended, their head would raise up. At the same time they extend, they also must left tilt and turn. Coordinating those three pieces (extension, left tilt and turning) keeps their head still. Doing one piece more than the other, makes one’s head move.

There are two things in these pictures that illustrate major differentiators between the game’s best players and its worst. The first is the degree the left shoulder goes downward. A poor golfer’s left shoulder doesn’t go down enough, long enough. He or she levels out and, as a result, raises his or her head. The second thing is that the player’s left arm can’t orbit the body long enough. It won’t go back far enough, and if he or she tries to go back farther, the head starts bobbing all over the place. The function of the extension is to allow the golfer to turn longer on the backswing, propelling the left arm. That fault has been written off to lack of core strength–and more–and it causes a very poor definition of how the body needs to continually keep left-tilting. On the other hand, one’s extension allows his or her shoulder to turn. That permits the left arm to orbit all the way around the body, which permits the player to hit the ball far.

Plummer: Another component to demonstrate is the linear component or the hip slide. So we have extension, left tilt and hip slide. (And, trust us, we recognize that slide is a dirty word in golf.)

Some people think that sliding your hips causes a block. It does not. Extending or standing up too fast does. It throws the club to the right, and you end up blocking the shot. If you just slid and turned, the club would always come around in a circle. Coordinating those three things together (extension, left tilt, hip slide) to make the golfer swing in a circle is what the Stack and Tilt system is all about.

Bennett: In the pictures (left), Andy is tilting and extending to propel his backswing and followthrough.

Plummer: You can sum up the pictures of Mike below in just six words: weight forward, shoulder down, hands in. Note how his arms didn’t lift off his rib cage on his backswing because his shoulders continued to turn. And his shoulders only continued to turn because he kept left-tilting and extending. You can see that the hands are in by the fact that they’re behind–not above–the shoulder.

From the down-the-line view, you can see how the spine tilt is keeping Mike’s club from swinging out across the ball. Because the hips slid forward, his head didn’t raise from the ground so he stayed in inclination. Hence, he’s not topping the ball. Note how the shaft angle is parallel to the ground, and in line with his hands. Most amateurs start their downswing with not enough hip slide, keep their weight back and so are outside of it. It’s the slide that keeps the club in.

Plummer: Now let’s take a look at Mike’s photos. Note how his head hasn’t raised up and his shoulders have turned at the same angle as the backswing. The eyes, shoulders and spine are tilted to the ground. That only happens because Mike has done a continuous hip slide.

When you look at the picture below, you can see that I’m extended off the ground–I’m in anatomical extension. But if you look at Mike’s picture, he hasn’t raised off the ground. How’s that possible? How is it possible to go from flexion to extension without raising up? The answer is that his hips have slid. It increases the right tilt that replaces the loss of forward flexion coming through the ball.

Most people don’t know how much they need to slide and how far they need to go forward. They move forward a little bit, then stop and continue turning without moving forward so they have more rotary movement than linear. As a result, they swipe across the ball like a windshield wiper. If you could tell them to start with more weight on their left and to continue to keep moving their hip forward, that would keep them from hitting out at the ball and make them draw the ball.

The first line in our book, The Stack and Tilt Swing, says, If all of the golf instruction books, videos and lessons for the last hundred years had taught people to keep their weight on the left side and to swing their hands inward, we would have generations of golfers drawing the ball instead of slicing. The game has been misinterpreted by shifting the weight back and then not clearly articulating how far and how long it needs to go forward.
This story originally ran in Golf Tips in the winter 2010 issue.