HOCKEY + GOLF: IS THERE A CONNECTION?
Have you ever wondered why so many hockey players are also good golfers? First of all, they’re some of the best athletes in the world, with incredible eye/hand coordination. Top golfers have amazing eye/hand abilities, but beyond the intrinsic physical and mental characteristics golfers and hockey players share, I can’t think of any other sport that has such a strong physical connection to golf than hockey does. Hitting a baseball has a similar look, but you’re working on a completely different plane angle, which is far more horizontal. And although hockey is a reactive sport, both golf and hockey are played by compressing an object into the grass or ice, i.e., what you hit is on the ground.

For instance, as you can see from the adjacent photos with NHL star Dustin Penner and myself, both sports rely on a strong rotary motion around a fixed spine angle. This important point is imperative in both a golf shot and executing a slapshot in hockey. Note the footwork and hip rotation through impact. Pretty similar, right?

I actually was astonished when I saw these photos, and despite how different Dustin and I are physically, we still manage to mirror ourselves pretty well.

During my time as Masters champion Mike Weir’s swing coach, we would reference a slapshot motion in order to work on covering the ball better in the downswing. Having grown up in Canada, Mike played hockey during his youth, and it was a great crossover visual and some-thing very relatable due to the similar nature of the two sports.

Another key element of hockey that Weir parlayed into his golf swing was his amazing sense of balance, meaning you want to remain as balanced as possible if you want to control the direction of either a golf ball or a hockey puck. For you golfers who don’t play hockey, just imagine hitting a golf ball into a 6×4-foot net–with ice skates on. Not so easy, right? This is yet another reason why many hockey players play some pretty good golf. Their balance is phenomenal. 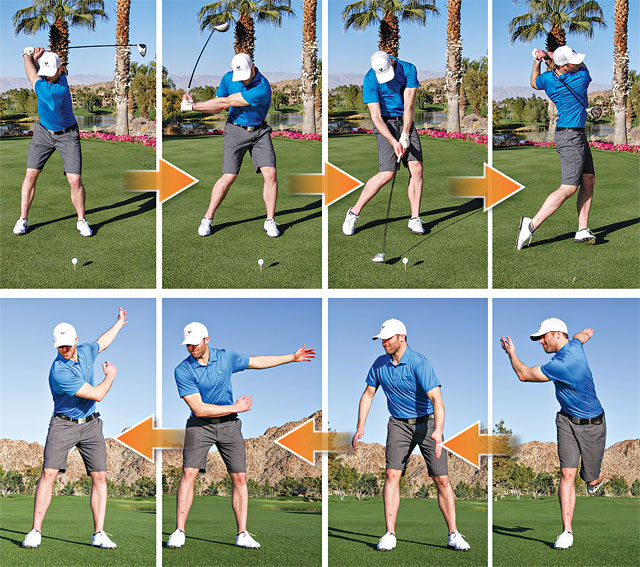 SWING SIMILARITIES
DUSTIN PENNER has a great golf swing and looks like a Tour player at the top! He stands 6’4″, which gives him an incredible radius and width to his swing arc. However, for a golfer whose main sport is based on strength and power, controlling his swingspeed is a key thought when working with him. Like many good golfers with high clubhead speed, Dustin tends to apply too much speed from the top of his downswing rather than waiting until the club is in the “slot.”

This causes the right foot and pelvis to extend toward the ball and hinders hip rotation, resulting in an impact condition that requires a lot of hand manipulation. So, we work on delaying his arm speed, which allows his hips to start the downswing. This tends to keep him more grounded through impact with the stable base needed to deliver his 125 mph swingspeed! That’s insane speed by the way, and I’ve seen him hit bombs near the 400-yard mark!

EQUIPMENT CHECK
DUSTIN not only plays TaylorMade golf clubs, he uses a TaylorMade RBZ Stage 2 CCM hockey stick. Technology is advancing in all sports, and TaylorMade has expanded their reach into the game of hockey by developing a stick that provides 20% more coefficient of restitution than the original RBZ stick to maximize puck velocity. Just like golf, it’s important in hockey to have a stick that’s custom-fit for the player, including lie angle, blade curve, weight and length. No two hockey sticks are the same, just as no clubs are the same. And, in case you’re wondering, Dustin’s clubs lean toward the stiffer side, but I’ve considered putting him into some softer shafts to help slow his swingspeed down and hit straighter shots. We aren’t quite there yet, but the point is, sometimes we think fast swingers always need stiff shafts and slow swingers always should choose soft shafts. That’s not the case at all. Tempo and how you transition the club from backswing to forwardswing are often more important than swingspeed.

WHO IS DUSTIN PENNER?
DUSTIN PENNER is one of the few NHL players who has won two Stanley Cup Championships with two different teams (the Los Angeles Kings and the Anaheim Ducks). He was born and raised in Winkler, Manitoba, Canada, and he’s an eight-year NHL veteran. Dustin currently plays to a 6.8 index, and this summer he’ll be working hard to get it even lower.

“I started playing golf at the age of 12, and I’ve loved it ever since,” says Dustin. “Obviously, competition is what drew me to the game, but really, it’s the constant quest for perfection that keeps me going. I’m always looking to improve my game, which is where my coach, David Woods, comes in. He helps me by improving my current swing rather than trying to remake my movement. As an athlete, this is something that I can relate to.

“What I love about golf is its individualism. It sounds selfish, but it’s one of the few sports you can do by yourself and have it be just as competitive as a team sport. The aesthetic beauty is another. Getting to play on some of the best courses in the country, like here at The Vintage Club in Indian Wells, California, just makes golf even sweeter. It’s one of the few sports you can play your whole life and not get tired of it. It’s a great way to forge and maintain friendships, as well.”

Folks, as you can see, hockey has a real connection with golf, but that doesn’t mean other sports don’t. Yes, baseball, softball, tennis, bowling, even basketball, all have some sort of relatable trait to the game of golf. The goal is to take a sport that you’re familiar with and apply what you learned in that sport to your golf game. So stay tuned! I think we’ll be tackling a new sport and athlete in an upcoming issue.

David Woods, PGA, is the Director of Golf at The Vintage Club in Indian Wells, California, For more information, catch him on Twitter at @davidwoodspga.