I was hitting balls one day with my friend and fellow teaching professional, Ron Gring, when he described a way of looking at all the key shots in golf as the nine panes of glass. This obviously refers to the image you see above, with a fade, straight shot and draw at low, medium and high trajectories fitting into the nine slots. I’ve personally used this idea to describe what it takes to become a complete player on many occasions and believe it’s the best way to visualize the nine key shots. The best players on Tour, most notably Tiger, have mastered the method for breaking all nine panes of glass, both in practice and on the course. Study the fundamentals described in the following pages and you, too, can be a true shotmaker. 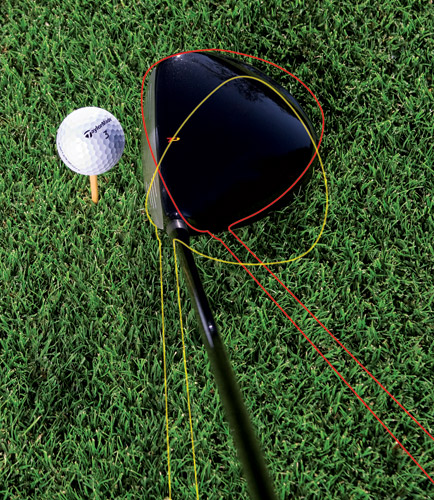 Square
For a neutral shot, the clubface angle at address should be square to the target line. For the vast majority of shots, you’ll find that it’s best to utilize the same clubface alignment and stance configuration, (open stance with open clubface, etc.). Whenever you move the clubface angle into a position that’s contradictory to the stance line, you’re asking for trouble. Remember that the more natural curvature your shots have in one direction, the better chance you have of eliminating one side of the golf course, which can be critical to high-percentage driving and solid overall play.

Open
The amount you rotate the clubface at address will affect the curvature and trajectory of your shot. Opening the clubface obviously promotes a left-to-right shot and a higher trajectory, but also tends to promote slightly shorter shots. An open clubface is great for producing shots that land softly with little release.

Closed
A closed clubface promotes a shot that travels right to left and tends to fly on a lower trajectory. This is effective for producing shots that have plenty of roll.

Tee Shots
When deciding what shot to play from the tee, the first thing you have to do is assess the situation and determine what shot you feel best fits the shape of the landing area. Here it’s pretty clear that the best shot is one that moves from right to left. Of course, if you can hit a straight shot that lands where the arrow is pointing, that’s fine too, but any shot other than a draw in this situation effectively makes the fairway smaller. When possible, try to make the fairway bigger.

Approach Shots
Tee shots are definitely not the only instances where curving the ball on command can help produce lower scores. In fact, shotmaking is probably more valuable when approaching the green. Here you can see that the shot I’m faced with features a flag that’s positioned with trouble on the right and the fat part of the green on the left. The highest-percentage shot for this situation is one that travels from left to right, curving from the fat part of the green toward the pin. If I happen to hit it straight, I’m safe, and if I fade it more than I want, I’m still on the green. This is the main benefit of learning to be a shotmaker—making your targets effectively bigger by shaping your shots to fit the layout of the golf course.

Tom Stickney is the director of instruction at Bighorn GC in Palm Desert, Calif., and The Club at Cordillera in Edwards, Colo.