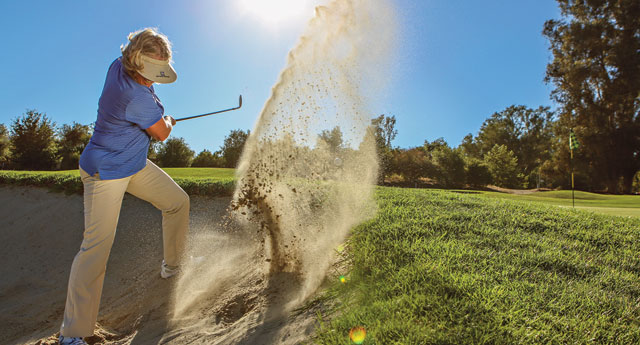 If you really want to shoot lower scores, it’s imperative that you learn the shots on the golf course you need to prevent big numbers from occurring. After all, no matter how much time you spend perfecting your golf swing, occasionally, you’re going to hit a less than perfect shot or catch an unlucky break or two. Let’s look at the shots I think you need to know to keep your scores in check.

THE EMBEDDED BLAST
It’s going to happen! You hit what you thought was a great shot, only to find out you miscalculated your yardage or a gust of wind knocked your golf ball out of the sky. The result? Not only is it in the bunker, but it’s embedded in the sidehill of the bunker in perhaps the worst lie you can get on the course.

Now, before you fret over it, this shot is actually salvageable. To start, lower your expectations. The most important thing with this shot is getting the ball out of the sand, not necessarily getting it close to the hole. If you get it out and you’re still a ways from the hole, as long as you’re out of the sand, you’ve still hit a good shot. If you get it close to save par, you’ve hit an amazing one.

To play this shot, set up with your weight firmly centered. Set up with a square clubface and don’t open it a bit. Play with the hands ahead of the ball slightly and tighten your hands so the club doesn’t slip when you plow into the sand. Next, level out the shoulders so you make your swing as horizontal as possible. Finally, come time to hit the ball, I want you to hit the sand about a half inch under the ball and don’t lift up at any point in the stroke! Hit the clubface into the bank, even if it means leaving the clubhead in the sand post-impact. Don’t err by hitting too low behind the ball–a half inch is all you need to wedge some sand between the clubface and ball and lift the ball into the air. It’s almost like hitting a line-drive baseball off a tee. You want to make as horizonal a strike as you can, just beneath the ball. The sand pinched between the clubhead and ball is what will lift the ball up. The key is being aggressive. Don’t let up!

THE 20- TO 40-YARD BUNKER SHOT
This is one of the scariest shots in golf, but it needn’t be. To have some success here, you need to know how to set up properly, what club to use and what type of ballflight to expect. Set up the right way, with light feet, and don’t feel as though you need to dig deep into the sand like you would with a greenside bunker. Dig in just enough so you maintain good footing, but stay light on your feet. Next, I want you to think of this shot as more of a clean-and-pick shot, not a bunker blast. The sternum must continue to turn through the shot or the club will enter the bunker wherever the sternum stops, that is, you must keep the body rotating to prevent from digging too much into the sand.

You also want to stay tall, with the chin up and the arms extended, but relaxed through the shot. The hands need to stay fairly quiet, and there will be a slight hinge in the arms in the backswing. As for club choice, you always want to make sure you take a club with enough loft to get you over the lip of the bunker you’re in. If the pin is fairly close to the landing area on the green, you’ll want to take a more lofted club. If you have more room to work with, you can use a less lofted club and plan for the ball to run more when it hits the green. Remember to stay “light” and pick it clean with a good rotation of the body. This is one of the few bunker shots where hitting the sand first is going to hurt you more than help you.

Once I set up correctly using my arrows as a guide, the rest is simple. I just swing the club a little outside-in to ensure I can cut across the ball along the left arrow on my downswing. As for the face, it’s not going to be as open at impact as it was at setup, but that’s fine. It still will be plenty open to help push the ball higher into the air.

For high bunker shots, and for most regular sand shots, too, I encourage you to play the ball in the middle of your stance, but be sure your stance is opened to encourage that outside-in path. This means, when you open your stance, it will feel like you have the ball way forward in your stance, although that’s not the case. To see what I mean, in the photos above, I did little more than open my stance by dropping my left foot back. It looks like the ball moved forward, but it didn’t! The next time you set up, set up square first so you know where the ball should be. Then open your stance. You’ll be in the perfect position every time.

The key to a successful pitch shot over a hazard is to make sure you go through your preshot routine, take a club that will work with the lie the ball is in (tight lies are harder to hit with a club with a lot of bounce), and pick the area or spot where you want the ball to land. I always take a practice swing looking at either the spot where I want the ball to land or the pin. Then, I make sure I have good balance at address and the ball position matches the ballflight I want (back in the stance for a lower ballflight, more forward in the stance for a higher, softer ballflight). The last thing I do before I begin my takeaway is to look at my target, back at the ball and then immediately start my swing before I can think about anything else!

Find a routine that works best for you and that takes your mind off the hazard and on a spot where you want the ball to land. Try the “last look” technique I like to do. Set up, take a glance at the target, then make your swing immediately!

Hitting chip-and-run shots with your fairway wood or hybrid is a great way to make sure the lie doesn’t affect your results too much. Why? Hybrids and woods have wide soles and you don’t have to try and scoop the ball up like you would with a wedge or an iron.

To hit this shot successfully, set up with the ball in the center of your stance with some shaft lean toward the target. Really, for this shot, the setup is the only difference from your normal putting routine. Mimic your putting stroke, making a smooth, rhythmic stroke into and through the back of the ball. The key is to avoid using a lot of wrist action and rock the shoulders, keeping the clubhead low going back and through.

I like to think of this chip shot as though you’re lightly tossing a golf ball onto the green. In fact, that’s a great drill to ingrain the proper feel. Simply grab a ball and toss it lightly onto the green. Do that a few times, and you’ll develop a sense for the right sequence of motion when hitting a chip with your woods or hybrids.

SWING LOW TO THE GROUND

TOE-DOWN CHIP
If you find yourself in some long rough just off the green, any attempt to try and hit a regular pitch, chip or flop is going to be a tough one. To make things easier, and to produce better results, consider hitting this shot with the toe down and the heel raised up. By raising the heel, there’s less club for the grass to try and grab.

Start by sliding your hands down on the grip and creating an almost straight up-and-down angle to the shaft, forcing the toe of the clubhead down. Your weight should be slightly on the target side, which creates the steeper angle of attack that you want. Next, the lower body stays very quiet in the backswing with very little release on the followthrough. The arms are going to be close to the body and the hands very quiet while the shoulders rock back and through on a downward angle to the ball. The followthrough should stay low through the shot, the weight quiet and the eyes focused on where the ball was through the shot. In fact, the body needs to stay tilted over the ball all the way through. With practice, you can learn how to control distance since it flies and rolls differently than normal chip shots. It’s a real strokesaver!

It’s critical that you don’t get too flippy with the hands! If you use too much hand action, you’ll have very inconsistent results. Instead, turn that sternum!

As I hit this shot, it’s important I don’t stop turning my sternum because, if I do, the clubhead will want to release too soon, negating the loft I need to carry the bunker. But if I rotate, it becomes a lot easier to hold the face open at impact and delay the release of my hands until after I make contact with the golf ball.

Hitting a regular chip shot is sometimes made too complicated. I’ve seen students try and hit chips with open stances and closed clubfaces, closed clubfaces and open stances, and so on. In reality, simpler is always better, and that starts with proper alignment.

Set up with the clubface aiming at your target or a spot on the green where you want to hit the ball, and align your feet, hips and shoulder parallel left. If you feel a little more comfortable with a slightly open stance, that’s fine; just don’t open your hips and shoulders along with your feet. Next, keep your feet close together, with your knees flexed and your weight centered in your stance. Your eyes should be in front of the golf ball where you want the clubhead to bottom out.

Next, slide your hands down on the grip (you’re looking for control, not trying to hit it a long way), and point the butt end of the shaft at your left inner thigh. The hands should always stay ahead of the clubhead on this shot, with the arms staying close to the body. It’s not the hands and arms that control the distance of the shot, rather the rotation of the sternum controls how far you’re going to hit the ball. The weight should remain on the target side through the shot, with a slight release of the lower body to the target through impact. It’s a lot like the feeling of throwing a ball underhand when using the wood or hybrid. Your pace for this shot should be very smooth. The “smoother” the shot, the more control of distance you’ll have and the more feel you’ll have for the shot. Quick/fast motions create fast and hard shots whereas smooth/even pace creates soft and controlled shots.