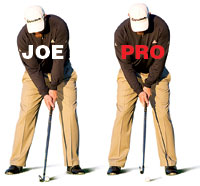 When you compare an average golfer (in this case, we’ll called him JOE) to a Tour player (let’s call him PRO), you notice big differences in each golf swing. For example, the PRO can achieve certain swing positions because he’s more flexible and has stronger golf muscles than JOE. In fact, physical limitations often prevent JOE from reaching the same positions as the PRO, making it critical for him to make certain adjustments to his technique in order to still strike the ball solidly without hurting himself.

What I’m saying is that if you’re an average recreational player, trying to copy the exact moves of a Tour player is going to make you worse. But that doesn’t mean, by any stretch, that you can’t have a sound swing and be a good ballstriker and scorer._Ê

In the following pages, I’ll describe specifically where the PRO’s and JOE’s respective techniques should diverge and what adjustments you should make to various parts of your swing in order to maximize your potential._Ê

PROs Tend To Be Neutral At Address; JOEs Can’t Be
JOE needs to start building an inside path to the ball at setup. His right shoulder should be lower than the left and pulled back to produce a slightly closed alignment in relationship to his feet. This tilts his upper body away from the target, making it easier to turn properly and avoid the dreaded reverse pivot. Flaring both feet slightly makes it easier to rotate.

The PRO wants to restrict early rotation of his body and an excessively inside attack. His feet are more perpendicular to the target line, with his body more stacked and neutral.

The Difference In The Backswing Is All About The Pivot
In order for JOE to achieve enough shoulder turn, his hips have to participate from the beginning. The adjustments to the address position help, but free-turning hips are the key to JOE getting to the top properly. The sharper turn of his hips negates any lateral movement away from the target with his lower body. When combined with the slight tilt at address, his upper body moves to the right as it rotates, making it much easier to attack the ball from the inside.

The PRO limits the rotation of his lower body at address and continues to do so by moving laterally during the takeaway. This slows down the turn of his hips, making it easier to swing the club up in front of his body.

The PRO’s pivot keeps his shoulders steeper going back, preventing the club from swinging around his body excessively during the swing. It also promotes a more dynamic change of direction and greater power.

Even players who have the proper mechanics can be hampered by a significant lack of flexibility.
This is a revealing set of pictures. Here, JOE allows his hips to turn freely going back, facilitating the proper position at the top of his backswing. While the lower body looks different than that of Charles Howell the top is extremely similar.

The NO picture is a perfect example of what happens when you limit hip rotation without enough flexibility to make it work. While the right leg has maintained its flex like Howell’s, the club is out of position at the top because his shoulder turn has been restricted too much.

The purpose of the backswing is to set up a powerful, on-plane approach into impact. This can happen with both the more restricted backswing of the PRO and the free-turning move of JOE. Either way, both golfers shouldn’t try to make a backswing pivot that’s beyond his flexibility and strength.

Charles Howell III is a perfect example of how Tour players, especially the younger ones, produce amazing power with slight frames—it’s all about good tension, or torque. Professional golf is played by more athletic players than ever before. The PRO works extremely hard off the course on his fitness, specifically core strength and flexibility. As a result, he can wind up his upper body against his hips, while the JOE has to wind up his entire body against the ground. The benefit to the PRO is an increase in control with a reduced number of moving parts, leading to a buildup in power like that of a stretched rubber band. This good tension isn’t from being overly stiff, but from being extremely athletic and dynamic.

A Dynamic Change In Direction Isn’t For Everyone

The biggest difference between the PRO and the JOE downswing is in the sequence of motion. The torque produced by the PRO on the backswing can now be utilized during the attack at the ball. The PRO moves dynamically, starting his lower body toward the target before his backswing has finished. This produces a great deal of lag and the potential for tremendous clubhead speed.

JOE starts his downswing with his lower body as well, but it isn’t nearly as dynamic. The rubber band wasn’t stretched as tight going back, and the decrease in tension produces less potential for speed. JOE can still be very powerful, but his limitation in flexibility and core strength requires a different approach. The power must be achieved while keeping the club on the proper path. A quick spin of his hips and shoulders will force the club on a steep, outside path. Starting the downswing with a smooth, lateral motion helps his club stay more to the inside coming down, which is a key to JOE’s success.

A good way to understand the PRO’s technique is to think about it in comparison to a Major League pitcher’s motion or a professional tennis player’s service motion. When elite-level players from these sports deliver energy to the ball, whether it’s through their arm or racquet, they use a motion that’s very similar to cracking a whip. Energy is stored on the way back and then significantly increased when the body and arm or racquet starts moving in two different directions at once (the body turns toward the target, but the arm is still going away from it). This is exactly what pro golfers do, except with a golf club

PROs are more stacked at impact; JOEs tend to lean away from the target.

The differences between the PRO and JOE during address, backswing and downswing have now taken full effect at impact. JOE’s commitment to the proper swing path keeps his right side tilted from the start. While this produces the proper path, it tilts his upper body back slightly at impact. As a result, contact with an iron can lack some compression,
but the benefits to his shot from the proper path make up for it.

The PRO’s more centered action during the entire motion, with less tilt and less rotation, allows a more stacked impact position. His shoulders are directly over his hips and his knees are in a powerful and level alignment. This creates a more direct contact at impact that can be heard very clearly. Notice the straight line up from the PRO’s left foot to his left shoulder. This is the definition of stacked and is a clear contrast from JOE’s impact position.

Another critical element to the PRO’s swing that comes from his stacked-at-impact position is outstanding balance. The PRO has his weight firmly on his left foot at impact, which allows him to leverage himself against the ground. The PRO’s arms extend down and through the ball while his legs and body are moving upward as his left leg straightens. This not only creates a lot of dynamic power at impact, but also leads to a comfortable, balanced finish. This is why you rarely see
a PRO stumble into the finish.

In comparison, JOE has to lean away from the target at impact and so has more weight on his right side, which can cause poor balance._Ê

Tiger’s swing is certainly one of the best in the history of the game. Though his style in these pictures taken last fall reflects much of what’s commonly accepted among teachers in the game today, the real secret to Tiger’s swing occurs at the moment of impact. In fact, throughout his professional career, Tiger has won major championships with three very different styles of golf swing. The one thing that hasn’t changed is his dynamics at impact, namely his four-inch-in-front swing bottom that allows him to compress the ball fully, providing extremely consistent results. If you’re interested in hitting the ball solidly, this is the area of the swing on which you should concentrate the most.

Bobby Clampett, PGA Tour player and CBS commentator, is also the author of The Impact Zone with Andy Brumer. For more about Bobby Clampett and the Impact Zone, visit www.bobbyclampett.com and www.impactzonegolf.net.