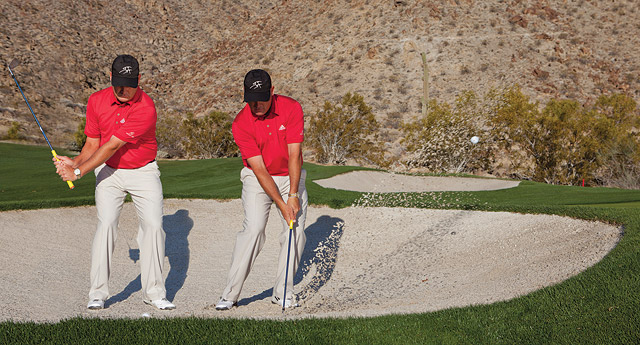 So you think you’re a player? If so, then I have some news for you. Tour players, in particular, do things a little different to ensure they not only play their best, but remain competitive week in and week out. And, in case you’re wondering, playing professional golf regularly means you’ve already succeeded at placing yourself among the elite players in the world. That said, for the rest of us who may aspire to be better players, who at the very least want to look and feel like one from time to time, here are a handful of tips that will help you get a gist for what it means to be a real player.

BUMP YOUR TEE UP

To start, let’s look at a scenario on a mid-length par-3. For amateurs, it’s preferred that you tee the ball as often as possible since it not only sets up a perfect lie, but also gives you a little more room for error in case you don’t compress the ball very well and you hit slightly up on it. But what about the pros? Do they always tee it up? Not always. Some players like to “cheat” a little bit, and instead of a tee, they actually hit the grass with the back of their club, leaving a small divot and a slightly raised area of grass behind the divot (this is allowed under the rules, by the way). The player then plays the ball off that slightly raised area. This is preferred by some players because it helps them not only to remember to hit down and compress the ball, but it makes it easier for them to control their trajectories and distances. Off a tee, it’s possible you may catch the ball a little higher on the face, hitting a high, low-spinning ball that travels farther than a ball hit lower on the face that carries less and has more spin.

Try this on the practice tee, using the technique I’m demonstrating above, and also with a tee. You’ll probably see some real differences in how the golf ball flies and spins.

I challenge you to find any player on the PGA Tour who would say they approach tricky shots with fear and trepidation, like this one over a bunker to a tight pin. Instead, they think positive and hit the shot that’s required, aggressively. In this case, I need to hit a high flop shot, and to do that, I need to really be confident with how much my wrists hinge, unhinge and hinge again.

In the sequence above, I start with the ball forward, with my hands slightly back. From there, check out the massive hinge in my wrists at the top. My wrists are moving so fast that, after impact in photo #3, my clubhead is ahead of the ball. Also, notice how close my hands stay to my core. These two keys (fast hands that stay close to the body) are what you need to hit a high flop shot. Practice it, and remember to be aggressive. Players always choose the aggressive play!

STICK IN THE SAND

Who said you need to follow through? Following through in the bunkers isn’t always necessary. In particular, when faced with sunken or fried egg lies, Tour players know that you need to get the club deep and underneath the ball. To do that, you need to hit down on the sand and create a hill of sand that pushes the ball up and out of the bunker. This requires a steep, sharp angle of attack into the sand anywhere from 1 to 3 inches behind the ball. The deeper the lie, the harder you need to hit the sand. (The softer the sand, the farther behind the ball you want to hit the sand.) I like to hinge my wrists and fire into my left side with a steep swing that plows into the sand and stays there. Some players actually hit the sand and recoil the club back, helping to add some extra “stab” to the shot. But that’s not always necessary. Sometimes sticking the wedge deep into the sand is all you need to extricate the ball and get out of that gnarly lie.

Shotmaking isn’t limited to the fairway. Tour players often shape their tee shots as often as they do their approach shots. There are two shots that I think any real player needs to know how to hit. The first is the high, bombing draw. To do that, tee the ball higher and play it forward in the stance, add some shoulder tilt away from the target, and keep your head behind the ball through impact. The other shot is the low cutter, which is a drive with a mid-low trajectory and some fade-spin to hold the fairway. (It’s a great shot for tight fairways and when you want to control your driving distances.) Play the ball a little farther back in your stance with a lower tee height and less shoulder tilt, and try to keep your head above the ball at impact. Do that, and you’ll see the effect: a low, cutting fade that’s easy to control.

Hit down on it! Hybrids are remarkable clubs. They’ve made shots that were once reserved for hard-to-hit long irons much easier, and in my opinion, a lot more fun. Same goes for some of today’s fairway woods. They’re crazy long!

That said, why do so many amateurs struggle with hybrids and woods? Too often, amateurs feel as though they need to sweep or hit up on the ball. In reality, that’s not the case. Hybrids are actually designed to be played more like middle irons! If anything, you want to hit down on the ball and make a divot after you collide with the golf ball.

In the sequence here, notice how I have a hairy lie from the rough. This is actually great practice for me, since it forces me to hit down and through the grass to get the ball up and going. Now, here’s the secret. From the fairway, I have the same angle of attack. The wider sole of the hybrid means it’s less likely I’ll hit it fat anyway, so I hit down on all my hybrids shots–from everywhere. 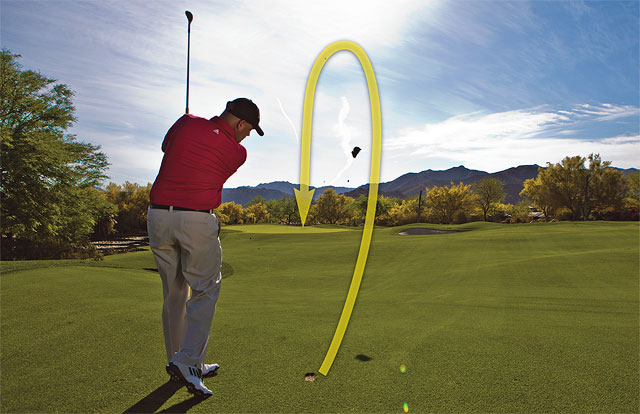 AIM RIGHT OF THE PIN (WITH A slight DRAW)

Tour players are always thinking ahead. One way they do that is with their approach shots. For instance, they know that most greens tend to slope from back to front in some way. And, for most players, hitting putts that roll right to left are a lot easier than putts that roll away from you, or left to right. This is why some players take aim and favor the right side of the pin, especially if the pin is in the middle or left side of the green. Why? Simply because those right-to-left breakers are easier to make.

As for hitting a slight draw? They do this too, since this shot means less backspin and more roll toward the back-left corner of the green.

Try this technique and take aim to the right side of the pins. See if that helps your putting.

Speed is your friend. Even though you’re hitting short shots around the green, sometimes you need to add some speed to your swing to produce good results. One of my favorite shots (that Tour players use a lot) is the cut swiper. It’s basically a pitch that has cut-spin. The mechanics require a slightly outside-inside path and plenty of body rotation to ensure you “cut” across the ball as you pick it off the turf. The trick to hit this shot successfully is to remember to turn the body with the hands close and allow them to gain some extra speed. This may mean taking a shorter backswing, if necessary. The result is a mid-height pitch that hops and stops in a hurry. Don’t close the clubface as you hit this shot. Hold it open as you swipe across the ball. It’s a risky shot, for sure, but if you can master it, it’s incredibly useful.

TAKE OUT THE BREAK

Ever heard of the “pro side” of the hole? I think that’s more myth than reality. The “pro side” of the cup is generally the higher side, meaning pros tend to play the extra break that amateurs miss. Eh, not quite. Players have more confident strokes than we mortals so, if anything, they play less break and hit faster putts. This is especially true on short putts, where players don’t fear lengthy comebacks in case they miss. Instead, they tend to take out the break and jar that ball into the back of the cup.

The key, as always, is to make a confident, accelerating stroke and don’t be afraid to take out some of the break. This may mean trying to make a putt to an imaginary hole a foot behind the real one. I’ll bet you start making more putts this way than you would playing more break and dying the ball at the hole.