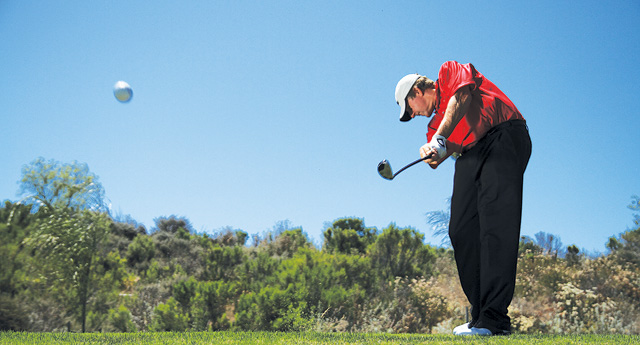 SWING THE CLUB ON ITS ANGLE
HERE I’M ADDRESSING the ball and making a swing with two different clubs, an 8-iron and a hybrid. With the 8-iron, I stand closer to the ball because the club is shorter. As a result, my swing plane is more upright. (Notice how, in my backswing, the club bisects my right shoulder.)

With the hybrid, which measures roughly four inches longer than the 8-iron, I stand farther away from the ball and swing on a flatter plane. (This time, note how the club bisects my bicep and is more parallel to the ground.)

The different angles of the club change the type of impact I create. With a steeper or more upright attack like the 8-iron, I hit down on the ball, take a divot and launch the ball in the air. With the hybrid, while I still hit down on the ball, the flatter, shallower plane produces a swing that goes around more than it goes up and down. I take little if any divot and produce a more penetrating ballflight.

The key takeaway from this lesson is to allow your swing to naturally use the angle that the club has when you first set up to the ball. When the sole lies flat on the ground, you’ll be able to accurately know what angle.

LIES, LIES, LIES
HERE’S AN UNUSUAL PHOTO: three balls in three different lies with three different clubs. What am I getting after? Well, I want to show you that you have options in the rough depending on what kind of lie you have.

Here I have a ball that’s sitting up, a typical lie and a ball that’s sitting down. Each lie demands that I approach it with a different mind-set and club. Although I typically wouldn’t choose to hit a driver out of the rough, the one lie is so good, I practically could. If you’re a risk-taker, try it out in a practice round and see how it goes. If you can’t make decent contact and you need an extra 20 yards, go for it. Just remember to firm up your left hand so the clubface doesn’t turn over.

The regular lie gives you a great opportunity to hit a variety of shots including hybrid and fairway woods. If it’s too far down, don’t mess with the metals–take an iron and escape! Point being, the hybrid is best used on a “typical” lie.

HIT THE STINGER
PRETTY MUCH EVERYBODY has seen Tiger Woods hit his infamous stinger shot. His low 3-wood is just the thing he needs to keep the ball in play when his driver lets him down. But it’s not just for the world number one. It’s a shot you should learn to play too.

There are two ways to pull it off. The first is to address the ball as you normally would with it positioned just inside your left heel (as seen in the photo at left), and move your hands ahead so you deloft the clubface. This simple setup adjustment turns your 3-wood into about a 1½-wood. Obviously the lower loft you have, the lower the ball will go.

The other way to sting it, is to play the ball back (bottom left photo), so that it’s in the middle of your stance. This change in ball position will naturally move your hands ahead of the ball, but it’ll also change the bottom of your arc, and the club will still be closing as it approaches the ball. To remedy this, open up your stance so you don’t hook it.

ROTATE FOR CONTACT!
KEEPING THE CLUB in front of your body throughout the swing helps keep your body in sync and makes hitting longer clubs like fairway woods and hybrids a lot easier.

Take a look at the photo at left and you’ll see that, as I swing through the ball, my body continues to rotate to the left. I’m transferring my weight to my left side as my core muscles turn and my right shoulder works its way under and around. My spine angle has remained the same as it was at address, and my right heel has risen off the ground slightly. I’m moving in just the right way to guarantee a clean hit with a long club.

TEE IT UP
TEEING YOUR BALL the right height with your metal woods and hybrids determines what kind of contact you make.

With drivers, you want to tee the ball up so you catch it high on the clubface and take advantage of the clubface’s trampoline effect. However, with a fairway wood or hybrid, teeing it low is the way to go.

Consider the two photos you see at left. The top photo shows the correct height. The ball barely sits above the ground, because when struck, you want to take advantage of the club’s natural loft. (Note how angled my clubface is.) Now look at the bottom photo. If my club were to bottom out, I’d barely catch the top of the face. At best, I’d hit a knuckle ball, which wouldn’t go very far; at worst, I’d sky it and damage my club’s crown.

REDUCE THE GAP
TECHNOLOGY ADVANCES have made fairway woods and hybrids not only more forgiving, but longer too. Unfortunately for some folks, this distance and forgiveness gain has also created a distance gap between their metal woods and irons.

Consider the clubs that are in my bag. I don’t carry a 3-iron anymore (I’ve replaced it with a hybrid), but I hit my 4-iron 20 yards shorter than my hybrid. Typically the difference between my irons is 10 yards, so I’m literally missing a club (given that we can carry only 14 clubs, I’m stuck with what I’ve got).

If my predicament sounds familiar, and you find that the yardage difference between your hybrid and your longest iron is too great, take a cue from what I’m doing in the photos at right, and choke down. The bottom photo demonstrates my standard grip, while the top photo shows my hands about an inch down the rubber. Shortening the club shortens your swing arc and reduces distance. To figure out how far you hit the ball when choking down, vary your lengths on the range and add some clubs to your bag.

SHAPE YOUR SHOTS
WHILE NEW GOLFERS typically slice the ball, better golfers shape shots of all lengths. If this sounds hard to do, I’ve got good news for you. All you have to do is change how you set up to the ball.

Consider these two photos at left. In the large photo, I’m set-ting up for a cut shot, and in the smaller photo, I’m aligning for a draw. Let me run through both.

For the slice, notice the different lines I’ve aligned to. I’ve got my body lines, my clubface line and the target line. Whereas my body and swing path aim left, the clubface points to where I want the ball to end up. From here, I just swing along my body lines and let the path and clubface do the rest.

Now take a look at the smaller photo above. Notice how the target line points left, but my body and swing lines are angled to the right? I’ve just angled my body to the right while keeping my clubface aimed at where I want the ball to finish. That’s how you hit a draw! The same rules apply to both shot shapes. Don’t overthink it. Keep it simple, alter your body lines compared to your target lines and make a good swing.

HIGH AND LOW SHOTS
I BET THESE TWO PHOTOS look pretty similar, but if you focus in on my hands, you’ll see a big difference.
In the photo at left, my hands are opposite my left thigh, and in the photo at right, they’re opposite my right thigh. What does hand position have to do with shot trajectory? A lot.

Consider the angle of my clubface in each photo. Notice how, on the left, the face is pretty square or a little delofted? Decreasing the club’s loft produces a lower ballflight. In the photo on the right, the face is angling up a bit, because my hands are slightly behind the ball at impact. Obviously, adding loft will launch the ball on a higher trajectory.

While this tip is designed for better players, I suggest you give it a few test runs before implementing it on the course. There’s a risk of topping it if you try the right-photo hand position.

THE BUNKER BLAST
FAIRWAY BUNKER SHOTS should be one of the game’s easier shots, but too often, golfers overthink what to do, rather than following a few basic fundamentals.

Consider the photos on these two pages. Notice in the photo at left, how little I’ve dug my feet in. In fact, I do it just enough not to slip. If I were to dig in too much (like a greenside bunker shot), I’d get down too low and take too much sand, only advancing the ball very little. That’s not the objective here. I want to pick this ball clean.

In the three photos on the opposite page, you can see that my stance and body lines are aimed to the left of my target line. Why? I want to fade the ball out of the bunker because it’s a little easier to control. (Hitting a fade also launches the ball on a higher angle and helps me clear the bunker’s lip. I might lose a little distance, but at least I’ll be out of the kitty litter.)

Finally an important ingredient is to stay tall through your shot. That doesn’t mean stand up, but rather to stay in a more upright posture so you don’t dip down and take too much sand.
<td width=”92″ valign=”to

One thought on “Never Lay Up!”