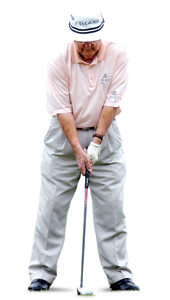 Golf is simple. Check that–golf should be simple. After all, the swing is basically a takeaway and a downswing. Like when you throw a baseball–you rear back then let it go. Then why do millions of golfers have such difficulty making consistent, solid contact? In my opinion, it’s because the golf swing requires coordination of not only all moving parts, but synchronization of the two halves of your body, the left and right. Each has a specific role in the swing, and if one does the other’s job, chances of success dwindle dramatically.

For years, golfers have been taught that the golf swing is a left-sided motion. Proponents of the left-sided swing claim that allowing the left side to dominate better keeps the club on plane and promotes greater accuracy. No disagreement with that here. The pulling motion of the left-sided swing certainly traces a more solid route back to the golf ball and, without a doubt, makes it almost impossible to push the ball to the right.

Furthermore, it’s the left side that leads the weight shift toward the target. But that’s not all there is to a repeatable, powerful golf swing. Equally important is how the right side of the body performs. As the left side leads, it’s just as crucial for the right side to turn and release through the ball. Both halves are critical to successful ballstriking._Ê 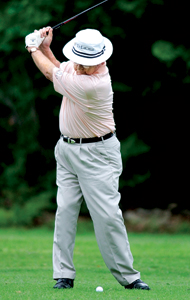 The problem many amateurs face is they’re consistently told to swing with the left and, in turn, wind up forgetting how the right side of the body should work. For one, it’s quite easy to pull the club to the inside of the target line, which, as you probably know, can create dead pulls to the left or, if the face is left open, a slice. Often, focusing solely on the left side results in sliding the entire body in front of the ball without properly turning the body through impact. In my experience, it’s this error–getting ahead of the ball without turning properly with the right side–that forces millions of golfers to hit shots far worse than what they’re capable of and post scores much higher than they should.

If you ever take a lesson from me, I’ll show you the benefits of hitting with the right side of your body. Hitting with the right side fuels a simpler swing and, believe it or not, increases power. Plus, it takes better advantage of your natural right-handed abilities (for all you right-handers out there) and, most importantly, allows you to stay behind the ball and create impact reminiscent of a home-run hitter. Here’s how.

Let’s assume you can achieve a solid at-the-top position, with the majority of your weight residing on your right foot, the clubshaft and plane and the clubhead square. Now what to do? First things first–what shouldn’t you do? Flaw number one at the end of the backswing is rushing the downswing. When you rush, you destroy path, tempo, timing, etc. Left-sided swingers are more prone to rushing since they’re preoccupied with the pulling the club down sensation from the top. If you think right-side turn, you’ll negate this problem, because in the right-sided swing I promote, you want to hit from your right side, with your head behind the ball and your eyes pointing down to your right shoelace. This is a key power position. Look at Barry Bonds when he swings the bat. Even when his hands reach his front shoulder in his followthrough, his head is still back over his rear knee (Bonds is a lefty, but you get the idea). Bonds’ right side remains still as he turns through the ball with his left side. This is real power, my friends. 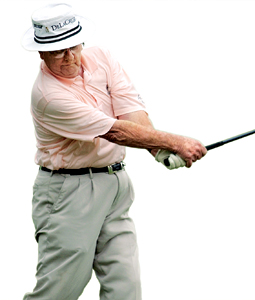 So how do you get to your left side, as you should, in the mid-followthrough with all this hanging back? The key is in your shoulders. While a left-sided golfer uses the lower body to get through the ball, which is a complicated task to time perfectly for most recreational players, the right-sided golfer uses his or her shoulders. Think of it this way: At the top of the backswing, the shoulders are rotated farther than the hips. At mid-downswing, that gap still exists, but at the finish, both the shoulders and hips are in alignment. What that should tell you is that through the impact zone, you must continue to rotate your shoulders in order for them to catch up to your hips.

I like to envision my right shoulder sliding right underneath my chin as I make contact. In fact, this always has been my best swing key. As long as you keep your lower body under control, and are aware of the need to rotate your right shoulder under your chin, you then can exploit the power inherent in your right side.
_Ê
Hitting from your right has a few caveats, but they’re minor. One, don’t become so occupied with your right arm that you forget about your left. After all, it’s your left side that leads the right-side turn by shifting your body weight to the left on the downswing. While I advocate hitting with the right, the technique requires coordination with a firm left arm so that just after contact is made, both arms are straight, with the continual turn of the right shoulder. Second, be wary of releasing too early. Power your swing with your right side, but strive to retain the angle in your right wrist for as long as possible. More angle here means a greater, faster release at impact.

Lastly, don’t over-prepare for a right-sided strike. Many of my right-side-dominated students fall into the habit of setting up directly on top of the ball with their shoulders aiming left. The proper address position features square shoulders with the right slightly lower than the left and with the head pre-set behind the ball. You have to think, Lead with the left and turn with the right. There’s an old saying that your impact and address positions should match. Unfortunately, this isn’t true. Unlike your address, where your hips and shoulders are square to the target, at impact your hips should be open with your shoulders square! Continue turning that right shoulder until it catches up with your hips at the finish position. That’s the secret to right-side power and accuracy.

Even proponents of the left-sided swing admit it’s not as powerful as hitting with your right. So take advantage of the energy you can create with your right side and don’t worry about any loss of control. If you follow the swing cues outlined above, you’ll certainly enjoy more than your fair share of accuracy.

12 thoughts on “Its A Right-Sided Swing”