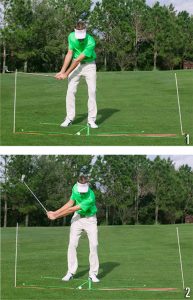 Now that we know the basics of how to hit a draw and the process to achieve it from article 1 and article 2, let’s dive in a bit deeper and talk about wrist action in the swing and how they have a dramatic effect on whether the ball will draw.

The wrists are an integral part of the process of hitting good golf shots, but many amateur golfers don’t fully understand how to use them properly, so we will talk about how they work and affect your ability to hit a draw.

During the golf swing the golfer will start their backswing, follow the grid and at some point begin to actively hinge the wrists (Photo 1). This upward hinging creates a lever designed to generate speed and power during the swing, much like a carpenter would hinge his hammer to generate power to strike a nail. Photo 2 shows how this position should look about halfway into the backswing.

Now when the golfer creates this hinge or L position like we see above, it’s important to discuss the right and wrong way to hinge. The two options for hinging the club are simple. Golfers have the option of hinging the club while keeping their left wrist (for a right-handed golfer) flat/bowed or they can hinge the club with a cupped/bent left wrist. These are the two ends of the spectrum. 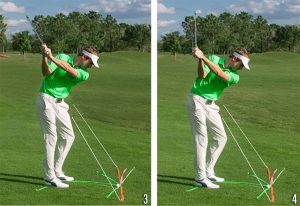 These differing wrist angles at the top of the swing will result in two totally different shots for the golfer. The golfer who hinges the club and develops the cupped position at the top has now effectively opened the club face (Photo 3). As you can see, it points more down toward the ground at the top of the backswing. By opening the face during the backswing, this golfer will need to make numerous compensations in his swing to attempt to shut the face before impact, resulting in erratic shots and general inconsistency. Also, you can see as the left wrist continues to cup the arms and elbows begin to separate, which makes it harder to trace the grid on the downswing.

Conversely, if we look at the golfer who hinges the club and creates a flat or bowed wrist angle at the top of the backswing, we see a clubface in a dramatically different position, pointing closer to the sky than the ground (Photo 4). We also notice that the arms of this golfer are straighter, closer together and more around the body which helps him trace the grid properly. Since one of the key components of hitting a draw is having the face of the club closed to the path, having a flat to bowed left wrist will increase the odds of accomplishing this.

A great way to generate a flat left wrist at the top of your backswing is to grab a book or tablet and place it in your hands as if you were holding a golf club. Take a pretend backswing and practice keeping the book against your lead/left forearm during the backswing and all the way up to the top (Photo 5). This will generate the flat left wrist we need to hit that draw. If the book/tablet is hitting your right forearm you have a cupped lead wrist and will be hitting a fade or slice!