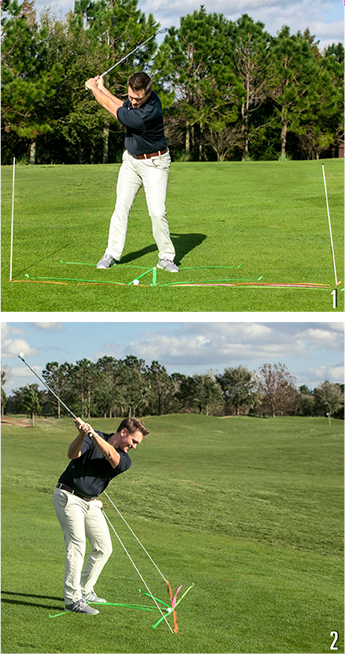 In our first article on how to hit a draw, we looked at the basic schematic of how the face and path of the club should move in conjunction with the hand and arm path. To help facilitate the motions of the grid we need to understand how the body work and more specifically the HIPS.

The hips are a very complex and large chunk of your body and mass. We all hear the hackneyed expression, “It’s all in the hips,” but there is a lot of validity that goes into that statement when it comes to golf. Let’s dive in further and see how the hips allow you to follow The Grid more efficiently.

A lot of old school golf instruction tells you to “keep the flex in your back leg during the backswing,” but the truth of the matter is we need to do the exact opposite. At address most if not all golfers start with some amount of knee flex. During the backswing, to properly follow the grid the lead leg will begin to gain an amount of flex and the trail leg will begin to lose flex, forcing the hips to tilt (Photos 1 & 2). Doing this allows the golfer to adequately turn the hips, allowing the shoulders to turn as well — and also creates a more inward hand path, which follows the grid. 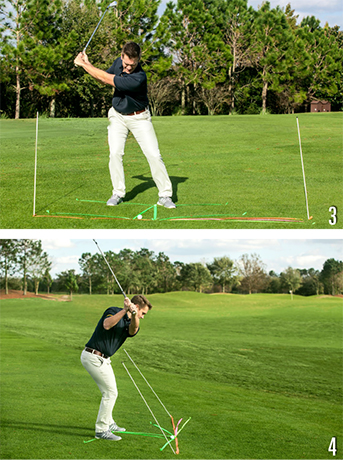 If a golfer were to keep as much flex in their legs as possible and attempt to make a backswing, he would turn the hips and shoulders significantly less, resulting in a lack of speed and power (Photos 3 & 4). It would also force the hands to stop going in, but rather move more out and away from the body, making the golfer less inclined to have an in to out swing path. Not allowing the hips to turn also forces the golfer to sway or excessively shift laterally, which will result in fat and/or thin contact.

A drill that I love to do with my students is the “Lawn Mower Drill” to help them understand the basic motor patterns.

First, stand in your address position with no golf club in your hands. Make sure you have some, if not extra flex in your legs to help exaggerate the drill.

From there I want you to take your right hand (for a right-handed golfer) and pretend that you have the string/cord from a lawnmower in it. Begin to pull that imaginary string as if you were starting the lawn mower, as demonstrated in Photos 5-7. Do this a few times and get a feel for the motion.

Notice how you were naturally inclined to let the legs change flex and you let the hips turn freely? Do more of this and you will master the action of the hips on the backswing.