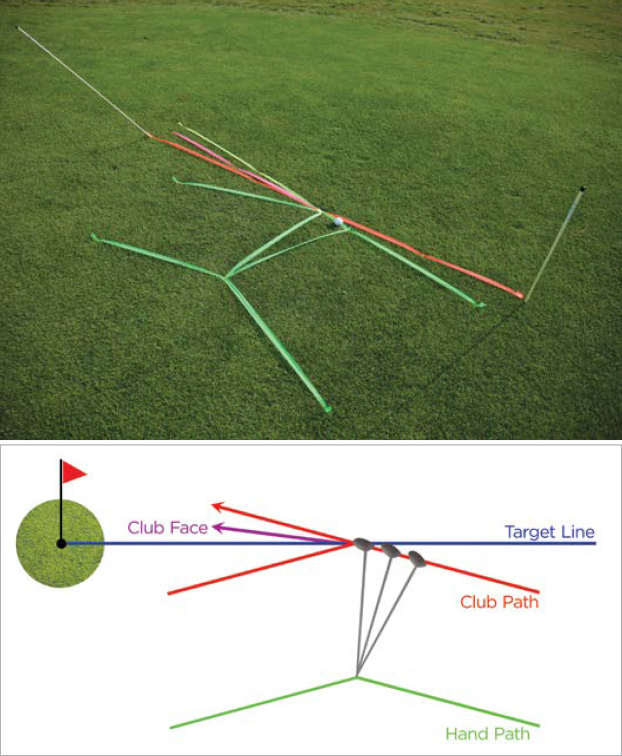 Golfers of all skill levels and experience regard the shot described by three familiar words — hit a draw — as the holy grail to master. The image of the ball leaving the face slightly to the right, getting up to its apex and making a small left hand turn as it moves closer and closer to the intended target is the stuff that high handicappers dream of. Then reality hits them. Each week amateurs go out to the range or the course and have nightmares over their banana slices and push cuts.

So why is the draw so seemingly difficult to produce? The answer is simple — it’s a lack of precise instruction on how to systematically approach the task.

In this five-part series will take you on a journey from chronic slicer to a drawing machine. We will begin with what we simply call The Grid.

In essence “The Grid” is your roadmap to hitting the golf ball with a draw. If you follow it and don’t make any wrong turns,  you will get to your intended destination. Before we dive into  The Grid let’s clearly define what our destination is.

To hit a draw, physics tells us that two things need to happen:

Now let’s see how The Grid plays an important role in getting to our intended destination.

In the photo above you will notice we have a few lines and arrows placed directly on the practice tee using tape or ribbon and golf tees. A basic understanding of what these lines mean will greatly improve your prospects of hitting that elusive draw, so let’s talk about them.

Since golf is an “offline” sport, meaning we stand adjacent to the ball while making a swing and not directly in line with the ball, so we cannot technically swing “straight back and straight through.” So what you see here are two very important lines that make an arc. The arc furthest away from the golfer — represent-ed by the green ribbon whre the ball rests, and the yellow ribbon after the “strike zone” — is the club path. The arc closest to the golfer is the hand path. To make the club path move in and around, the hands need to also move in and around.

The next thing you will notice is the ball placement. There is a straight line running vertical to the very point the path of the club moves from in-to-out, to out-to-in. From there the ball is placed a few inches to the right, or back, of that point. As the ball placement moves further back it pre-sets the path more in-to-out. If the ball is placed in front of or to the left of the vertical white line, you are pre-setting a fade bias into your swing.

The final piece to this is the club face. It is important that we make sure the clubface is closed to the path, or basically some-where between the path and the target line (represented by the red ribbon). This will get the ball started in an initial direction slightly right of the target and the path of the club will allow the ball to curve back to the left for a right-handed golfer.

A good way to practice a basic understanding of the grid would to physically lay some alignment rods or golf clubs on the ground, and set up as if there is a golf ball there. Hover your club well above the sticks and start to trace small, hip-height swings over the grid. Visualizing how the grid works and seeing it in action is very important to correcting your slice.