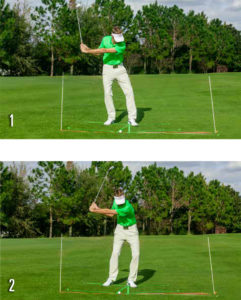 Now that the backswing is tidied up we begin our downswing, but what important things need to happen so we can trace our grid and also make a solid strike to hit a draw?

We hear a lot about “clearing our hips” in the downswing,” when in fact most golfers who struggle to hit a draw  have too much turn in the beginning stages of the swing. The best golfers in the world don't get to the top of their backswing and then immediately start turning the upper body as rapidly as possible, as in Photo 1; they actually move their hips laterally towards the target (Photo 2).

When a golfer allows the hips to move laterally in the direction of the target, he is actually making sure the low point of their swing is not behind the ball but rather in front of the ball to ensure a ball-first strike. He also ensures that the path of the club is in-to-out to strike the ball and create a draw, whereas rotating will rapidly shift their path across the ball creating a slice (Photo 3).

The best part of this motion is that you aren't eliminating your turn, you are merely slowing it down. The golfer who has the most amount of hip slide forward will tend to have the most in-to-out swing path and the most draw; conversely the golfer with the most turn and least amount of forward slide will have the most out-to-in swing. 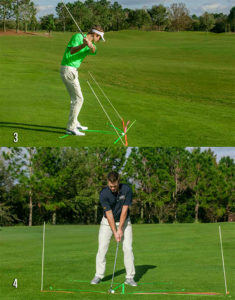 This drill is a great way to get golfers to feel how much slide is necessary to keep the path of the club moving in to out to generate a draw.

After feeling this motion repeat this drill but strike your golf ball. Notice how the strike will be ball first on the small swings and the ball should have some small amount of right to left draw on them.

Continue doing the drill until you feel confident to make the swing larger. As the swing gets larger you will notice the “turn” or “clearing of the hips” in the downswing is still happening but it's occurring much later than before!