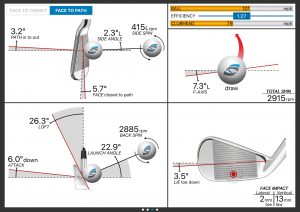 Nearly every golfer develops a natural shot pattern such as a fade, draw, slice or hook. The hardest shot is to consistently hit the ball straight. The benefit of playing a natural shot pattern is you generally know what the ball will do and where it will go. However, the overwhelming percentage of players routinely slice the golf ball and don’t understand why. They can’t figure out how to hit a draw.

Remember when Bubba Watson hit a miraculous 90-degree hook from the trees on the green that set up his first Masters victory? Understanding the fundamental reasons why the ball draws or hooks was imperative for him to pull that shot off. The following tips will help a player understand how they can begin to hit a draw.

How to Hit a Draw

Great ball strikers approach the ball from inside (see illustration at right). Additionally, they swing the club on an equal swing plane during the backswing to downswing or create a slightly steeper backswing and flatter downswing. Low handicap players rarely create a flat backswing and steep downswing.

Learn to approach the golf ball from inside the target line if you want to produce a draw. The sequence for the downswing should include the hips, upper body and arms. Players that start the downswing with the upper body create the unwanted “Over the Top” move that results in the outside-to-inside move. Divots point left of the intended target. Learn to sequence the downswing with the legs and hips rather than the upper body. In addition, this creates a more efficient weight shift so most weight is on the front leg at impact. Players that come over the Top often leave most of their weight on the back leg at impact.

The ideal neutral set-up positions the feet, knees, hips and shoulders parallel to the target line while the club face points directly at the target. The set-up plays an important role in the direction the ball will travel.

Players can manipulate the set up and promote a draw. Keep the club face pointed toward the target, however, line your feet up slightly to the right of the target. This encourages an in-to-out club path, flatter approach and closed club face at impact. When done correctly, altering your set-up is a simple way to alter ball flight so the ball starts to the right of the target line and curves back to the middle. 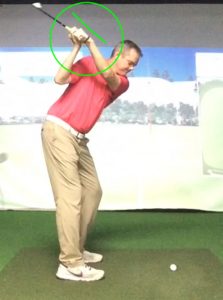 Understanding how the left wrist works during the downswing influences whether you hit a draw or fade at impact. Good ball strikers swing the club from the inside with the club face closed in relation to the path. In addition, the left wrist is in a bowed position (see photo at left).

Players that hit a draw generally create a flat wrist at the top of the backswing, and change the angle of the left wrist into a flexed, or bent position during the downswing.

This positions the club slightly behind the hands during the downswing and encourages the correct path and club face angle at impact needed for a draw. When the left wrist is in flexed position it should help drop the club head down the shaft plane and approach from the inside. The photos below shows this proper swing sequence.