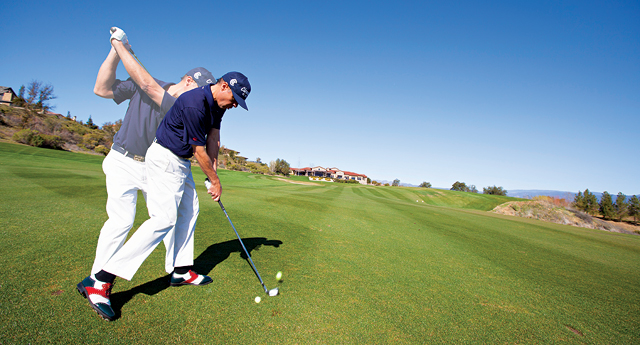 As golfers, we’re a blessed bunch to be able to play our favorite game over miles and miles of manicured turf. And, while most courses (especially the TPC of Valencia, where we shot this article) serve as some pretty nice backdrops for the eyes, the ground we play on is actually an integral part of the golf swing. Without stable footing, it becomes near impossible to hit the ball with any sense of consistency. This is one of the reasons why we wear spikes under our feet.

That said, the ground isn’t just there for our feet to cling to. It also serves as the foundation for the golf swing. In fact, better golf swings always work from the ground up and not the top down. Turn the page to see what I mean.

LOAD WITH THE HIPS

Here, I’m using one of my favorite training aids, the Orange Whip. It’s a great tool for tempo-timing, and it helps you make longer, more patient swings, especially as the body coils to the top of the backswing and initiates the downswing.

If you look at the photo above at the top of my swing, the goal is to feel as though you’ve loaded your weight into the inner side of your right leg. The sensation should feel as though your right foot is pressing into the ground. As you then start the downswing, the key is not to lift the weight out of your right leg; rather you should laterally bump it over to your left leg. This is done by a slight bump of the hips as you begin to rotate the body toward the target. The left leg should feel as though it’s plugged into the ground and stays firm as you move through the downswing.

Often, I see students do just the opposite. They take the club back with weight on the forward (left) leg and slide it over to the right leg on the downswing. That’s a recipe for the dreaded reverse-pivot, folks! Instead, let your weight move (I don’t use exact weight percentages since everyone’s swing is a little different) and load up that right leg. Then, bump those hips on the downswing and keep that left foot plugged in the ground.

Check out the top photo where I throw the ball using just my upper body. Not only does it look bad, but the results weren’t pretty, either. Now look at the more leveraged throw. I heaved that a good 20 yards without exerting myself. How? I used the ground and leveraged it by driving my left leg into the turf as I unwound and released the ball.

It’s the same feeling you should have on your downswing. The body should feel as though it’s driving down and into your left leg as you rotate toward the target. A great way for you to ingrain this proper feel is to drive your right knee toward the target as you swing. This will help you move weight both toward the target and into the ground. The more effectively you do this, the easier it is to rotate the body and also to make a full extension of the arms through impact.

If you’re a top-down swinger, I’ll bet you have a problem casting the club. When you cast the club and release the wrists too soon, it not only robs you of power and control, but it affects your lower-body stability, as well. Reason being, casting exerts force up and away from the ground, and when that happens, it’s not uncommon for the heels to come off the ground and lose your footing. To illustrate, think of holding a fishing pole on the edge of a dock. The goal is to cast your bait as far away as you can, which means you’ll likely lean and lift your heels as you cast, right? Well, that works in fishing, but it’s a death knell in playing good golf.

Instead, practice adding some hinge and lag to your swing. I like to use a Smash Bag to check and make my wrists hold their hinge for as long as possible, and at impact, I have some forward shaft lean. Notice in the above sequence that I’m hitting down into the Smash Bag, as opposed to trying to hit up on the Smash Bag as seen in the upper left photos.

And, by the way, I don’t always use the Smash Bag for impact-checking. I like to hit balls alongside of it to help me remember to hit down and through the golf ball.

Speaking of shaft lean, all your clubs are designed to have the shaft leaning forward at impact. The Tour Striker (another favorite training aid of mine) is an awesome product to help you develop a swing that has forward shaft lean at impact. A by-product of forward shaft lean is often a divot after impact with the ball, which again, is to be desired if you want to start hitting more crisp iron shots. In case you’re wondering, when I say “all clubs,” I also mean your woods and your driver. Even with the longer clubs in your bag, you should still have some shaft lean at impact. The longer the club, the less the lean.

Finally, the feet move quite a bit during the golf swing, and it’s important that you minimize any movement that isn’t necessary. To do that, consider placing your weight more in your heel and the balls of your feet. Keep your weight off your toes as you swing, since that’s the weakest and least stable part of your golf shoe. As you swing back, let your weight move toward your right heel, and as you swing down and through, the weight moves not to your left toe, but to the ball of your left foot.