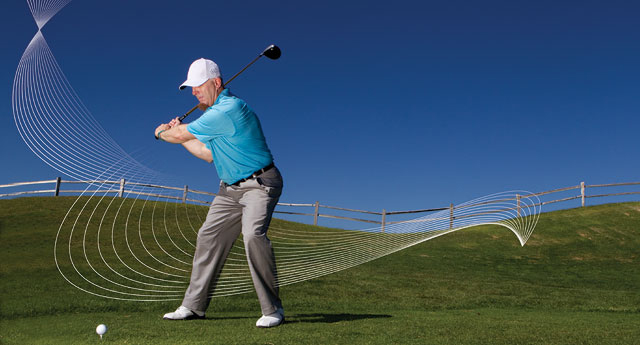 If you want to start hitting better golf shots right now, heed the advice on the following pages. I’ve purposefully tried to make various positions of the golf swing easier for you to understand, rehearse and memorize, as you’ll see by the breakdown of the swing into six pieces. Practice each of these, and better iron, wood and driver shots will come your way in no time.

When it comes to the takeaway, what we’re really talking about here is the leading motion of the golf swing. And to get things started correctly, save yourself the nightmare of having to compensate for a bunch of early mistakes by starting the club back the right way. The motion back away from the ball should be powered by the connection between your upper left arm and chest. When done properly, the arms, hands and club should be moved by this simple and easy-to-feel connection that serves as the “leader” of the backswing. A great way to make this work on the course is to use a rehearsal (waggle) takeaway just before initiating your swing, as I’m doing here. This will give you the proper feel seconds before it counts, making it much easier to get things moving in the right direction.

And by the way, if you add too much hinge in the hands, you’ll wind up with a handsy, flippy golf swing as opposed to a strong rotational one.

Once the swing has started back properly, the momentum of the club should be enough to help hinge your wrists the correct amount, at the correct time. The swing becomes contrived and inconsistent when you try to overdo the proper hinge in the wrists or avoid it altogether. If the hands and wrists become overactive, you’ll create too much hinge too early, creating a narrow backswing that’s less powerful. Trying to extend the arms too far for too long will prevent the proper hinge and lead to excessive lateral motion in the upper body away from the target. The solution is quite simple. Maintain the slight bend in your right arm and allow the weight of the club swinging back to hinge the wrist, and you’ll arrive at the proper position midway in the backswing. When problems are avoided early, they don’t need to be compensated for later.

Once the left arm is parallel to the ground on the backswing, you should have created nearly all the hinge you’ll need. It’s typical to see a bit more hinge in the irons than the driver, as the irons are shorter in length and the clubhead is heavier (irons are generally at 90_¡ at left arm parallel, and the driver a little less). The increase in hinge from this point to the top should be the result of the weight of the club swinging up and over your right shoulder. In other words, don’t try to restrict or increase the hinge; it’ll take care of itself.

When it comes to lateral motion away from the target, let it be natural. As a general rule, the head will drift a bit more with the driver than with the irons, with neither moving consciously over the right foot. While there’s a great deal of debate over how centered the pivot should be, go with what’s natural and avoid what feels off balance or contrived, and it’s more likely you’ll repeat your backswing.

Lastly, unless you’re unusually flexible, allow your hips to rotate to the top of the swing. The right leg can straighten a little from the address position if it makes it easier for you to turn; it isn’t the end of the world and will give you the potential for more power. The combination of a big, free turn of the body to the top with limited hand and wrist action is ideal for building consistency. There’s nothing wrong with being a little short of parallel at the top if you’ve cranked up the body turn!

IRON
It may sound silly, but the backswing ends by beginning the downswing. Before the arms and club have finished going back, the feet and knees take over as the “leader” and begin the motion back toward the ball. What was wide at the top in terms of the angle between the left arm and clubshaft becomes powerfully narrowed as the club resists the change in direction from backswing to downswing. If you’ve moved slightly away from the target on the backswing, it’s critical to make up this ground and get back over the left leg without delay. Always remember that the bottom of the arc has to be in front of the ball when hitting irons, making it mandatory to get the weight in the right place (or be prepared for fat and thin shots).

DRIVER
While the sequence starting the downswing is the same with both the driver and the irons, the goal is different. Unlike with the irons, the bottom of the arc with the driver should be slightly behind the ball. Except for the longest of Tour players, the optimal launch conditions for the driver require it to be hit on a slightly ascending angle. As a result, the sequence starting down is as it was for the iron, but the head and upper body can stay slightly “back” behind the ball. When combined with the more forward ball position when using the driver, the club will be able to work “up” at impact maximizing distance and accuracy.

While there are definite differences in the clubhead’s angle of attack at impact when using an iron or a driver, the relative position of the body is nearly the same. The left arm is long while the right arm is still bent, the hips are open, and the legs are pushing away from the ground and becoming straighter through impact. With both the irons and the driver, the hands lead the shaft into impact. The amount they lead is up to the player, but there must be a little forward handle position if the ball is to be struck properly. While it seems hard to understand, the clubhead can be going down with the iron and up with the driver while the hands are leading in both swings. The good news is if you sequence the swing correctly and keep your hands and arms relaxed, the alignments at impact will be much easier to achieve. You just can’t force it!

It’s time to let go. The upper left arm and chest lead the motion, the feet and knees take over at the top, and now it is momentum’s turn. When the legs push against the ground through impact and the hips are cleared or rotated out of the way, all that’s left is to “throw” the arms and club out of your shoulder sockets. Trying to “hold” the angle after impact slows down the clubhead and avoids the freedom of the release. When done correctly, both arms will be straight, the club will be slightly outside the hands, the weight will be on the front foot, and there will be nothing to do but let the club take you to the finish.

The finish on the lower left is fairly typical with many recreational golfers. The clubshaft is pointing behind me toward the ground, the body is under-rotated, and the weight hasn’t moved into the front foot. The old saying holds true, “If you don’t know where you’re going, you probably won’t get there.” Focus on pointing your right shoulder to the target with your right foot up on the tippy toe and the club wrapped around, and you’ll be amazed how much better your swing becomes. Working on mechanics is great on the range, but if you’re going to keep one thought on the golf course, make it, “Stick your finish position.” It can make all the difference!

Top-25 Golf Tips Instructor Brady Riggs, PGA, is one of the most sought-after golf instructors in the country. Based in Southern California, Riggs can be reached online at bradyriggs.com.

2 thoughts on “Get In Tune”