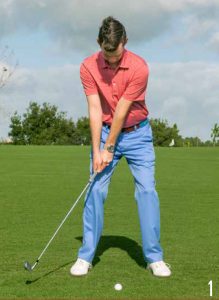 Everything I teach comes from studying the best players in the world. I don’t necessarily teach the “Fundamentals of Golf” as I learned them growing up — based on a number of factors I’ve found they don’t necessarily apply to all golfers. I like to teach what I call the Tour Fundamentals of Golf, which I’ve found the majority of all golfers on the PGA, LPGA, European, and Champion tours apply in their own games. The four movements below are essential to playing golf at a high level and are adhered to by the best players in the world.

These movements have a huge effect on clubface orientation, swing direction, low point control, and club head speed. The difference between an elite golfer and a higher handicapper can typically be found in one of these four areas, and although the full swing is only one piece of the pie, the majority of higher handicap golfers waste a large number of strokes because they cannot control their golf ball. This is a telling sign that they are struggling with at least one of the four movements listed above. 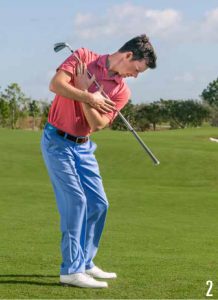 The initial move away from the ball is very important in the golf swing as it sets the tone for the rest of the swing. The best players in the world begin by rotating the buttons of the shirt (center of sternum) until they point at the trail knee. This will place the hands just past the knee with the club head just slightly out in front of the hands, as I’m demonstrating in Photo 1. The average tour player has 27 degrees of rotation prior to the club becoming parallel to the ground in the backswing. More tilting goes on as the player rotates, but that is set up by forward bend at address. I like a player to think rotation in the first few inches away from the golf ball. The thought of tilting can then follow.

Once the buttons of the shirt, or center of sternum, are pointing at the trail knee it’s time to begin adding tilt. Feel the left shoulder (RH golfers) work down and across moving the hands and arms inward. The average tour player begins with their trail shoulder tilted 11 degrees downward at address and by the time they reach the top of the backswing the forward shoulder is tilted downward 36 degrees. In Photo 2 I’m using a club held against my chest at would be the top of the backswing to show how much tilt that really is. That means from the time the buttons reached the trail knee in the rotation phase, the shoulders tilted another 20 plus degrees before the player reaches the top of the backswing. 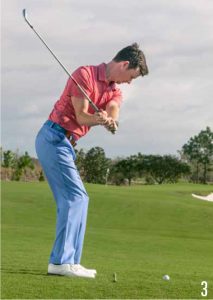 The movement in the transition, and into the downswing, is one that should begin with a lateral bump of the hips towards the target. This initial move is key to facilitating the plane at which the golf club moves into impact (Photo 3). From the top, the tour player shifts and sits down into the ground, allowing them to spring upward, creating maximum force into impact. The average golfer typically does the opposite. They begin with a spinning of the hips since many players can’t separate the hips from torso; the golf club is then out of balance, and on top of the plane. They are also now more on their trail side (right side for right-handers) as they near impact. This causes both heavy and thin mis-hits. 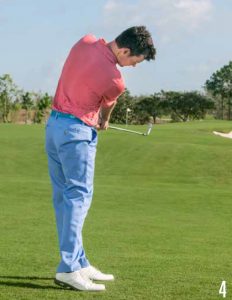 The extension (straightening) of the arms, club, and body post-impact is a key characteristic all great ball strikers share. This extension is produced by what happens prior to impact. The first three movements are very important! The best players in the world use the ground as leverage just prior to impact, causing the legs and pelvis to begin to straighten after impact. This is why they hit the golf ball as far as they do. This movement controls the positioning of the golf club. Don’t be afraid to feel the front knee straightening through impact, as I’m doing in Photo 4. The backside will then begin to tuck a bit and the arms will extend. Unfortunately I see 95 percent of golfers trying to do the opposite, which robs them of power and the consistency they are looking for.

Bill Schmedes is director of instruction at Fiddler’s Elbow Golf Club in Bedminster, New Jersey. Reach him at www.bs3golf.com