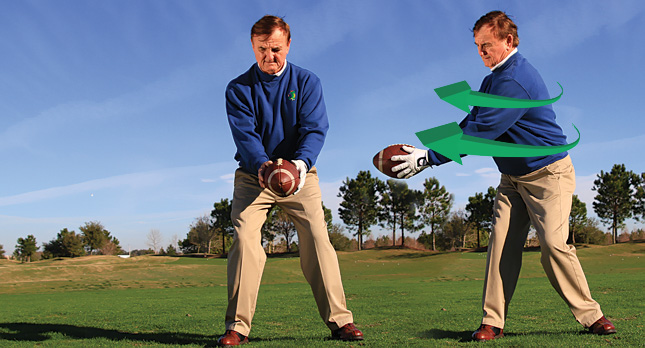 If anyone has ever told you that the golf swing is an athletic move, they’re right. The golf swing is, in fact, a very athletic motion. Specifically, a circular one. As you take the club back on the backswing and down and through on the forwardswing, the clubhead is swung around the body in a circle. It’s a lot like other sports, actually. Baseball, hockey, soccer, even football all share the same circular, rotary motions present in the golf swing.

In the following pages, we’re going to look at how to build a more powerful, circular golf swing with the help of a few sporting goods and a few household items that help to effectively demonstrate what you want to achieve. With a little practice, and some ingenuity, you’ll be on your way to building an athletic golf swing.

Imagine you were a quarterback about to hand the ball off to a running back. Your goal is to make sure the back has enough room to grab the ball, and also make sure it’s waist high so he can grip it and hold it secure. As you see here, when doing this, I instinctively turn my body to the right with the ball in front of my chest.

Talk about similar! Just as you would with a football handoff, the takeaway begins with the rotation of the body to the right and the club out in front of the chest. As you can see, my club is directly in front of my chest, and my weight has naturally shifted to my right leg.

As you rotate back, the upper body will rotate more than the lower body. To allow for this, let the left knee bend inward and the left heel raise. This helps in making sure you get your weight over your right foot on the backswing. Also, keep your hands out from your torso. The more room your swing has, the more power you’ll generate.

These two photos show exactly what you don’t want to do, with both a football and a golf club. With the ball, if you don’t rotate the body, the running back will have a hard time grabbing the football from you. With the golf club, no rotation usually leads to an improper weight shift, which in this case, usually leads to the dreaded reverse-pivot (which is when your weight shifts in the opposite direction from where it’s supposed to).

So follow the correct guidelines to a proper takeaway and rotation of the body. Just think of a good football handoff!

A great way to feel the right sensation of how the upper body rotates away on the backswing is to rehearse your backswing using a saw. Remember, to use a saw properly, you have to rock the saw back and forth, right? The same principle applies to the right arm on the backswing.

So grab a saw, and set up in a good golf stance. As you take the saw back with your right arm, imagine you’re cutting something at a 45-degree angle.

As you do this, notice the direction my right shoulder moves. It should go straight back. Also, the upper body will want to rotate to the right. This is a positive by-product of a good backswing.

When transferring the feeling of the saw over to a golf club, you’ll quickly see the correlation. The right elbow, as you take the club back, doesn’t juke out to the side as you see in the infamous “chicken wing” pose at the top of the backswing. By allowing the right shoulder to move back, the elbow stays in the proper position and my upper body is poised to make a better and bigger backswing, all the while keeping the clubhead on the proper plane. This is what you want!

A great way to feel the proper position at the top of the swing in perfect plane is to imagine swinging a sledgehammer. Or, if you’re feeling adventurous, grab one and try what I’m doing here. (Just be careful!) While you take the hammer back, as you would with a club, allow the shoulders to twist back first, which then makes it easier to hinge the wrists and support the weight of the hammer. If you take the hammer back with the hands first, you’ll know because of the increased strain on your hands and forearms at the top (see the photo to the right.) Ouch!

When you make a proper backswing, the head of the hammer ought to reside just above the hands. In the sequence above, I’m doing it correctly and I feel my strongest and most secure with the hammer in the upright position. This was made possible because I first turned with my shoulders, which made it easier to keep my hands in front of my chest and hinge my wrists. Now, it’s a little steeper than you’d normally see with a golf club, but the point of the drill is to avoid laying the club too much off the line at the top. If you do that, you’ll hit a lot of sliced and errant shots.

The discus throw has always been one of my favorite track-and-field events. There’s a lot to learn from how the throwers are able to keep their upper and lower body in sync as they uncoil and hurl the discus down the field. When they throw, not only are they using circular power, but they also know that the key to more distance is to open the hips first and allow the upper body to follow.

To demonstrate, grab a discus, or a frisbee if you don’t have one. As you attempt to throw it, notice how difficult it is to throw the discus in the intended direction if you don’t open your hips. It’s almost impossible, right? Yet, it seems so many golfers actually try to hit the ball with their hips and shoulders square to the target at impact. As you may guess, this rarely leads to good shots, and in most cases, the arms outrace the body, the left elbow raises, and voila–a chicken wing!

Instead of stopping your body at impact, make sure you rotate all the way through the shot, just like a discus thrower. You’ll see longer, straighter and more consistent shots right away.

A great lesson from another sport is to look at how a baseball player fields a ground ball. As he reaches down to pick up the ball, notice how the left leg braces against the ground and the body rotates around it.

The same principle applies to the golf swing! True power comes from having a rock-solid left leg on the downswing.

So keep that left leg firm as you swing into the ball. You’ll increase your swing speed and hit more powerful shots.

SWING FOR THE FENCES!

The baseball swing is so commonly associated with the golf swing, that some instructors actually teach both! As you can see in the photos above, what I’m trying to show is simple. The golf swing and the baseball swing are best executed when the arms extend through impact with the ball. And in keeping with the theme of this article, the best way to ensure your arms stay extended through the hit is to keep rotating your body.

By continuing the circular rotation of the body, and again, by keeping your arms in front of your chest, making a full extension of the arms becomes a much easier task. In fact, you really don’t even need to think about it, since it happens naturally when you maintain a good rotation through the hit.

Also, the more you can extend through the shot, the greater centrifugal force and speed you’ll generate. Meaning, the better your arm extension, the more power you’ll have and the longer your shots will go. It’s a simple swing thought, but a relevant one: Extend your arms like a baseball player swinging for the fences! 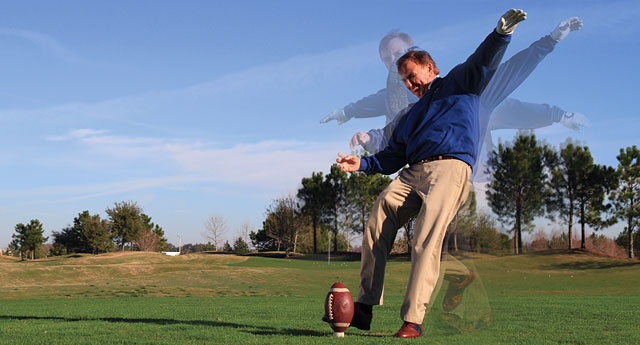 In football, the key is to control the centrifugal force of the weight of the foot swinging around the body and through the ball. Discus throwers throw out to the right, football kickers kick out to the right, and great golfers also swing out to the right. In fact, if you ask any great football kickers, they’ll tell you it’s best to aim at the right goalpost and draw the ball back in. This is the most powerful concept to learn in any sport. Because the lower body begins to unwind first, the kicker must swing his leg out to the right goalpost to enable the centrifugal force of his foot to be released. There is such tremendous torque because of this inner core unwinding, that if you swing your leg around toward the middle of the goalpost, the knee will begin to straighten out too early and the foot will swing across the football missing left or right. The same happens with the golf swing. However, many amateurs instinctively try to push the ball straight at the target, and the wrists open up prematurely, thus forcing the clubhead to be pulled across the target line producing an ugly slice or pull hook.

CIRCLE TO THE RIGHT

One thought on “Build An Athletic Golf Swing”