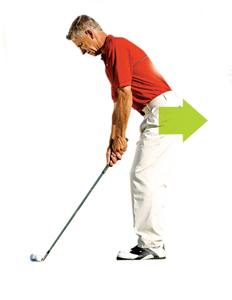 The third critical angle, hip bend, is closely related to spine bend. In fact, hip bend establishes the relative amount of spine bend. The hip bend angle must be set correctly at address and maintained throughout the swing. The common error is to bend from the stomach and not from the pelvic area, a mistake that places too much pressure and strain on the lower body delivery system.

Improper bending from the pelvic region is a pet peeve of mine since it forces the hips to overreact on the downswing. When you bend from the stomach and not the hips, the hips won't function in their usual role, which is to help stabilize the lower body during the swing. Instead, they're given too much freedom to move and often will scoot toward the target on the forwardswing. This immediately causes a variety of swing problems, not the least of which is a loss of power angles and path on the downswing. It doesn't matter who you are, with improper pelvic flex, you'll have to compensate somewhere in the swing to create decent contact.