Over the years, there has been so much written, photographed, and videoed about swing positions, swing movements, and other items that can improve your golf swing. But they all hinge on one among all core golf fundamentals: Nothing works unless you are properly aimed to your intended target. If you set out this year to improve one thing in your game, make it alignment, for all shots, tee to green. Alignment and how your eyes see your intended target is what programs the brain to execute your golf swing. And it is this one set-up position that can make or break any golf swing, regardless of skill level.

You can’t turn on a golf telecast these days without seeing ALL the tour professionals using some type of device or golf club to ensure that while they warm-up or practice, they have one part of their swing absolute — their alignment to their intended target. They have figured it out, with the help of FlightScope and other technologies. So why will you not do the same? You buy the clubs they play, the apparel they wear, and drink the same drinks they like. So why are you not taking their lead and ensuring your alignment is absolute, consistent, and the most dependable part of your game? 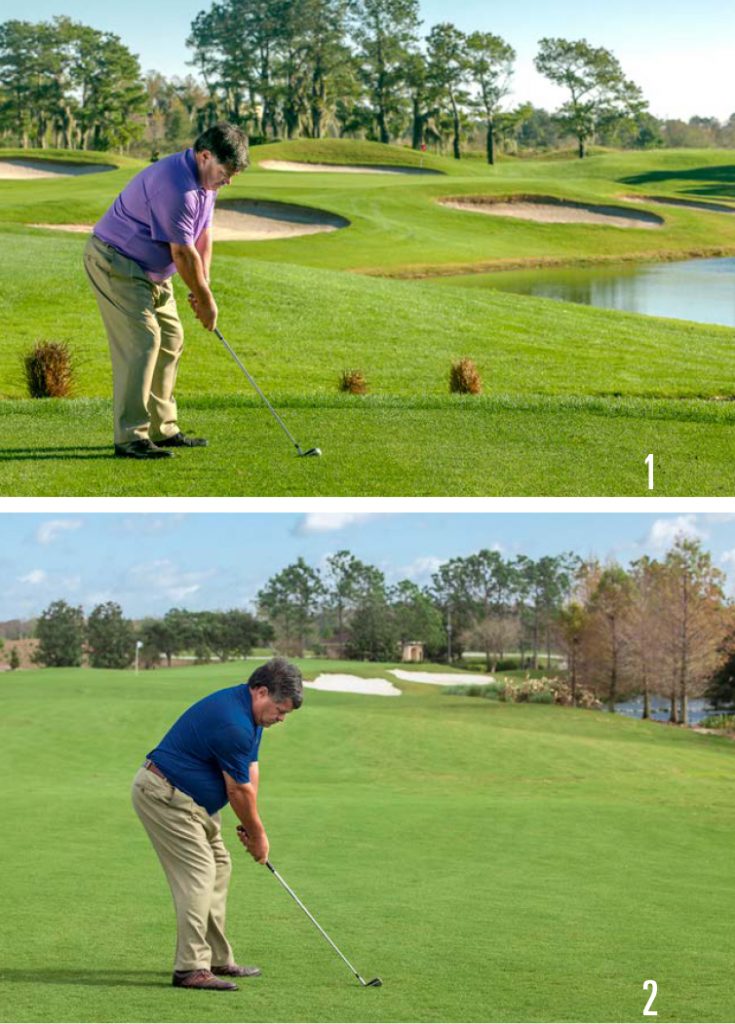 LET’S DO THE MATH

I had to bring out my 9th Grade Geometry book and once again look at theories about triangles and the old “Side-Angle-Side” theory to prove to you that alignment is critical to your golfing success. For our example, we’ll use a target at 150 yards.

If you are as much as four degrees aligned right of your target, and you hit a perfect shot every time, you will miss to the right of your intended target by as much as 10.5 yards, or 32 feet. Combine this fact with other variables and factors that affect the flight of the ball (wind and humidity, mis-hits, etc.), you could miss the target by a wider margin. And you must remember that if you hit the perfect shot 150 yards, it will not only miss right of the hole, it will be short, because of the arc created by the angle which you used to aim, four degrees.

This is a simple example of how a mini-mal amount of misaligning to your target can have you miss shots. In the almost three decades I have coached golfers, most are misaligning to their target 10 degrees or more on average, with most golfers aiming closed (right of target for the right-hander; left of target for the left-hander). Just look at my set-up in Photo 1 — I’m aimed right at the water!

When not aiming, or aligning to your in-tended target properly, you are allowing your eyes to send signals to your brain, a triangulation algorithm per se, that dictates how the brain will program the body to swing the club. But to swing the club and make the ball go to its intended target, the brain must also set up the rest of the body to do so.

I worked with a tour player that loved to hit a power fade with his driver 300-plus yards. His typical alignment had him aligning properly, or a couple of degrees open to his intended target. He had a neutral grip and always stood tall to the ball. His swing path was almost perfect every swing, with a hint of an outside-to-in motion when he was looking for more curve on the ball.

One day he came to me and told me not to tell him how to fix the big looping draw/hook he was now hitting, but tell him what he was doing that made that swing pattern happen. It was obvious, he was now aiming right of his target. He was also hunching over a bit and his grip became abnormally strong. His swing path was a pronounced outside-to-in motion and much steeper than normal. I put a club down to his heels and asked him to come take a look. After a few choice words, he replaced the club on the ground in the direction he wanted to aim and started swinging. Within 10 balls, his grip and posture began to return to normal; within 15-20 balls the big “over the top” move was almost gone, and his power fade returned.

Moral to the Story – Poor alignment leads to many other poor set-up positions, and in turn leads to most in-swing flaws. And this is true whether you are hitting a driver or stroking a putt.

Here are just some of the effects of poor alignment:

Aiming “closed” to the target (as I’m doing again in Photo 2); the eyes see target to the left (right-handed golfer) and program the brain to:

The opposite, or “open” aim: 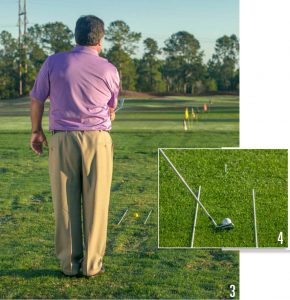 A SIMPLE REMINDER FOR PROPER AIM

When I took up the game in college, I made sure I watched Jack Nicklaus’ “Golf My Way,” which was so abundantly simple in its time and is now erroneously under-valued. Within the video series was Jack’s way of taking aim to any target. His process today is even more relevant than when the series was produced, with FlightScope and other technologies recognizing that great aim is the No. 1 position you should instill within your game. Here is what was said years ago, with a few additional points of emphasis as to why aim is critical to your golfing success:

“Stand directly behind the ball with enough room between you and the ball to see the obvious line made from the target to the ball.”

The common errors I see is most golfers do not stand directly on the target line behind the ball, nor do they leave enough room between them and the ball to properly distinguish the target line. Most golfers stand to one side of the line or the other, causing them to not see the actual line they intend to aim to. Your two eyes need more room than you think to aim you to the ball, and the ball to the target, on one line. Ensure you are at least 8-10 feet away from the ball, as I am in Photo 3, and straddling the target line so you see the true target line and where you should aim. Also note that I’m using my club as an aiming tool.

“Aim to something in front of the ball.”

You must admit, aiming to something 2-3 feet in front of you is much easier than something 10-plus yards away. Most targets are double that length. So why do you continue to aim to the target so far away? I recommend 2-3 feet from the ball as the optimal distance to aim to, as illustrated by the tee placed in front of my alignment sticks in Photo 4. This allows your peripheral vision to see that object you are aiming to during your routine, preventing you from standing up or moving your feet to see the target far away. 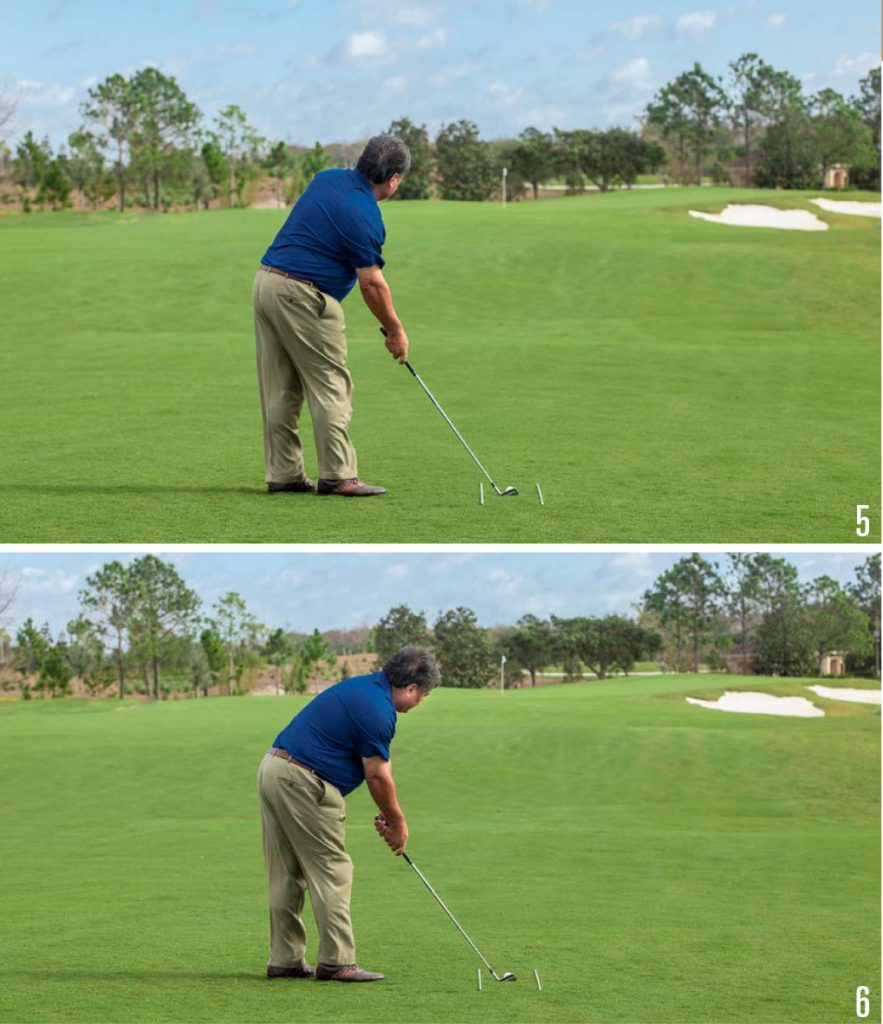 “Aim the club first, then your body, using only your bottom hand.”

The club hits the ball, not you. You swing the club. So why are you aiming your body first, then the club? Use the leading edge (the bottom) of the club to aim the club (Photo 5). Ninety-five percent of the direction and trajectory of each shot is determined by this edge and the first six grooves of the club. If you aim the club correctly, using only your bottom hand, chances are you’ll aim your body correctly too. Having both hands on the grip will prevent you from properly holding the club in the correct position at address. And holding the club with your top hand may cause you to close the club and aim right of your intended target. 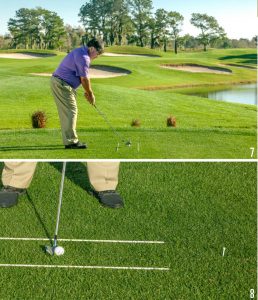 “Step into the shot and insure all body parts are on a line parallel left of your target line.”

After properly aiming the club, the rest is easy. Place your top hand on the club (Photo 6) and place both feet into the stance (Photo 7). Most of the time, your feet will now be “Parallel Left” of your intended target (Parallel Right for the left-hander). Feet are the most important parts of your body to be properly aligned because all great athletic moves are made from the ground up; golf is no different. But feet are not enough to ensure proper alignment. Every part of your body that creates a “hinge” in your stance, — your knees, your hips, and your shoulders — must also be parallel right of your target, on the same line as your feet. This pro-vide proper balance before, during, and after the swing as well as allowing your eyes to properly see the target.

I cannot overemphasize the importance of properly aiming to your target and its effect on the rest of your game. Technology backs this up, with some manufacturers insisting that its users always place an alignment rod on the ground to insure more consistent swing data, as I’m doing in Photo 8. I can show you countless swing videos of clients who significantly improved their ball striking, their chipping and bunker play, and their putting, by fixing nothing but their alignment. The before-and-after videos show a night and day difference, and so do their scores.

Make 2017 the year you invest $4 for alignment rods and use them! I guarantee it will be the best investment you’ll make in your game all year.

John Hughes is a PGA Master Professional based at Falcon’s Fire Golf Club in Orlando, Florida, and 2013 PGA of America Horton Smith Award Recipient. Visit him at www.johnhughesgolf.com