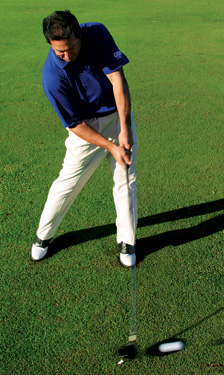 There are countless possible flaws in the golf swing that can lead to an endless variety of bad shots. However, in my 14 years of teaching golf, there are a few recurring swing flaws that afflict both amateurs and touring professionals alike. These flaws lead to a series of negative chain reactions during the swing and eventually wreak havoc on one’s ability to make a repetitive and powerful golf swing. Let’s take a look at some of the more common (but frequently overlooked) flaws that may have already crept into your golf swing, using my simple spot-and-fix techniques. With a few minor adjustments here and there, these flaws can be eliminated from your swing for good.

Fault:
Club taken back too far inside results in a blocked shot
Wow, have I seen this one a few times! Anytime the club is taken back too inside the target line, it’s darn near certain the golf ball isn’t going to fly straight. Not only will you likely block the ball to the right, but the upper body will rotate too much, and the lower body will never catch up. Therefore, when it’s time to unwind on the forwardswing, the lower body will be so far ahead of the upper body that it becomes virtually impossible to swing along the target line. Some golfers get away with pulling the club inside the target line and hitting blocked shots by simply aiming farther left. Though that sometimes works, a blocked shot is far less powerful than one hit down the line.

Fix:
Take the club back along target line for as long as possible
In this photo, I’ve taken the club back along the target line for as long as possible while still staying on plane. If I continue lifting the club straight up, I’ll lose my spine angle and my weight shift will suffer. Instead, once the club starts lifting off the ground, I’ll allow my body to rotate away from the ball. In this photo, as the club reaches waist high, you can see my shoulders have already begun turning, my lower body is stable, my knees remain flexed and the clubhead bisects both my forearms. Truth is, since the swing is both round and at an angle, it’s impossible to take the club straight back and through. But, in the first few inches, it’s a must-do to eliminate blocked shots.

Fault:
Reverse pivot results in fat shots and pop-ups
You don’t even need to see my upper body to know what’s wrong here! I’ve made a huge turn, but my weight has never left my front foot. As a result, I’m forced to lunge behind the ball on the downswing and scoop at it (resulting in a fat shot). If that doesn’t happen, another bad scenario is that I’ll never get behind the ball enough and will come at it steeply on the downswing, resulting in a pop-up (not to mention a scuff mark on the crown). As for my weight transfer, I’ve done little more than drive my weight downward into my forward foot. Also, you can see that most of the tension is on my forward leg, as indicated by the ripples on that side of my trousers. (Notice how my back trouser leg is wrinkle free?) This position is very unstable and weak, making it hard to make solid contact from here.

Fix:
Manage your weight properly
Now we’re on the right track. To manage your weight properly, the majority of your body mass must shift to your back foot during the backswing. It’s imperative to remember that shift and slide don’t mean the same thing. A proper weight shift is due to a proper weight turn, or coil. As the body turns away, the weight should naturally shift to the back (my right) foot. Any contrived weight shift is probably a weight slide, which inhibits the body from turning properly. Turning is key for power! Here, you can see I’ve loaded up my back leg with torque and that my trousers are tightened. All that’s left for me is to continue turning my upper body until my club is parallel and then unwind in unison on the downswing. Due to centripetal force, the upper body will unwind faster than the lower, even though both are initiated at the same time.

Fault:
Late wrist cock results in swaying and loss of distance
Among the most overlooked components of the golf swing is the importance of wrist movements. Many amateurs feel the key for more accuracy is to minimize wrist cock all together. Wrong! A proper wrist cock helps the body rotate more effectively and, in turn, helps increase speed through the ball. Here, I’m in a position that’s likely to lead to the position on the left page: a reverse pivot. Without a wrist cock, I’ll run out of room to swing, my body weight will tilt forward and I’ll have no idea what it should feel like to initiate the downswing. I’m also not going to get much clubhead speed and distance without cocking my wrists.

Fix:
Set the wrist earlier
Now we’re talking! Once the hands reach waist high (as shown here), the wrists should be almost fully cocked to a 90-degree angle. My left arm is straight and my right elbow is tucked downward, unlike the chicken wing look in the fault photo. From this position, I’m able to make a much more efficient rotation during the swing. Also, pay attention to my shoulders. Because of the wrist cock, I’m able to avoid dipping my left shoulder. Any shoulder dipping in this direction is a big no-no, so by cocking the wrists, I’m able to swing with a more level shoulder plane. If anything, at impact I want the left shoulder higher than the right. Never the other way around!

Fault:
Early hands release results in a loss of power
If you release your hands too soon, it’s a sure bet you’re going to lose power! Now some argue that amateurs should release the hands sooner than touring pros, and I agree. But if you’re too soon, you run the risk of casting the club, which seriously leaks horsepower from your swing. It’s also a sign of hitting the ball as opposed to swinging through the ball. An early release is sometimes caused by an overactive right hand (left for southpaws). In this photo, my right hand has taken over, and I’m on the verge of hitting a weak, sweeping duck hook to the left. The face is already square, and you can only imagine how shut it’ll be on the ball!

Fix:
Turn the body before you release the hands
See a trend here? The gist of this article is to get the body turning properly! In the critical nanoseconds before impact, it’s imperative that the body continue turning well into the finish. And regarding your wrist cock, if you continue your body turn, I guarantee your hands will release. The force of your rotation, along with gravity, will cause your hands to unfold at the lowest point on your swing arc. It’s here, where the arms and wrists extend and maximum clubhead speed is achieved. By the way, it’s also where today’s modern clubshafts are designed to release, resulting in even more power. As for accuracy, by not manipulating the hands and turning instead, you’ll see shots that fly straighter than shots you try to steer._Ê

Barry Goldstein is a teaching professional at Inverarry CC in Fort Lauderdale, Fla.