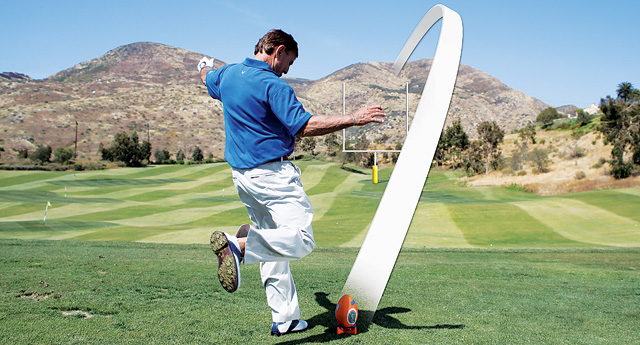 GOLF, BY ITS very nature, is like a variety of sports. As in other sports where you're required to kick, throw, hurl or hit an object, in golf, we use a rotational motion that's leveraged against the ground, which produces a powerful circular, free-flowing swing.

Let's look at a placekicker, for example. As the kicker steps into the kick, he's pushing into the ground with his left leg, which allows for his right leg to swing with powerful circular force through the football. In golf, we do the same thing, only our whole left side is planted into the ground as the club whips through the hitting zone.

Furthermore, a good kicker knows that the secret to more accurate and powerful kicks is to kick out to the right goalpost and draw the ball back in. It's the same in golf! Better and longer shots are the result of a slight inside-out swing path. Swinging inside-out opens up the body and results in a wider, more powerful free-flowing swing.

LIKE OTHER SPORTS, golf builds up power through body coil. As with a discus throw, where the body, from the knees to the shoulder, first coils away and around, the golf swing also coils.

As the body coils away from the target, the lower body stops coiling at some point. It's at this point where true power is formed. The more you can turn your upper body after your lower body has maxed out, the greater your torque and the faster your body will enable your arms and hands to whirl the club around and through the hitting zone. 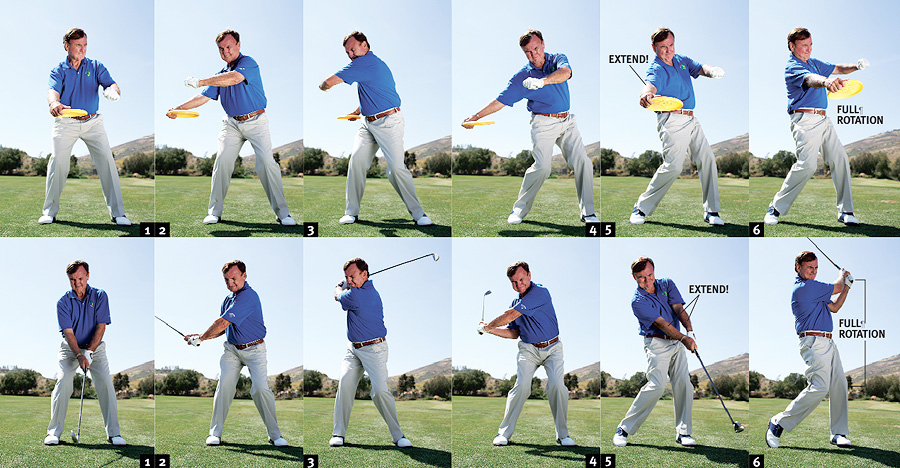 When that happens, the key is to uncoil by first rotating the lower body toward the target and by making an arc as wide as possible with the arms and clubhead out toward the right of the target–just like the kicker swung his leg out to the right, hooking the ball through the goalposts. The wider the arc, the more centrifugal force and the more power you'll leverage into the ball!

Check out the similarities in both swings. Pay particular attention to the body position at the top and near my release/impact position. They're practically identical. My hips have cleared first, allowing my upper body to follow, letting my arms swing through the release/hit zone. If I didn't rotate enough on the backswing, or if I stopped rotating through the ball on the forwardswing, I'd lose not only power, I'd lose accuracy and consistency.

How the wrists function through the hit is critical if you want more power. If the wrists don't hinge/unhinge, you can't get that extra whip and you'll have to rely too much on brute strength to hit the ball any sort of distance.

If I were to hit this golf ball with a bat from a high tee, I'd make sure at impact that my hands weren't hinged and the bat was fully released through the shot. In golf, too, I want my arms extended toward the ball and my head slightly behind it as I focus on swinging through the ball, not at it. Just like a soccer kick, in golf the left side opens up and faces the target, allowing the arms to swing in a circular motion through the ball. Like baseball, I want the back of my glove facing the target at impact, my arms extended and my head slightly behind the ball.

Once you have the right grip and hinging motion, you need to apply it to your golf swing. In the sequence above, I could unhinge my hands properly, mainly because I kept rotating through the shot! How and when you hinge/unhinge your wrists depends on how well you rotate toward and through the target. The key is for the hands and club to swing out and around your body in a circle so you finish on your left side.

The golf swing is meant to be a circle! All of the aforementioned motions, from leveraging against the ground to rotating the body and hinging the wrists, correlate to a circular swing of the golf club. As you can see by the ribbon below, all the parts of the swing come together so the clubhead can travel on a simple circle. There's no up and down or backward and forward. Just a circle!

The next time you practice, remember the key goal isn't to hit the ball using brute force. Instead, concentrate on the overall goal, which is to get the club swinging in a circle. You'll find that having this circular swing thought will keep you from swaying back and forth and coming over the top or even making a reverse pivot. Stay in your circle, and you'll see better results!

A lifetime PGA Tour member, Wally Armstrong has competed in more than 300 PGA Tour events, including numerous major championships, and is recognized as one of the game's most creative teachers.