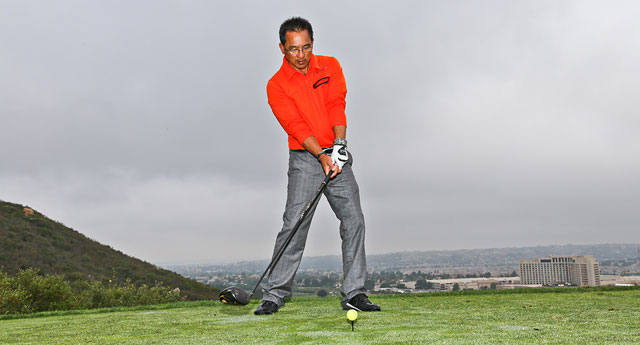 When it comes to playing golf, one thing is for sure: Rarely are two days ever the same. Some days, your swing is grooving nicely and you can’t miss. Other days, the club feels foreign and uncomfortable, and hitting decent shots is really tough! If I knew the secret for playing your best every time you play, I’d be the first to let everybody know. Instead, what I do know is that when things aren’t going exactly how you want and you sometimes feel uncomfortable, there are steps you can take to help protect your score and make it through the round.

Let’s take a look at a handful of scenarios where you can stop the bleeding and get back on track. These fixes, drills and even swing thoughts aren’t always the prettiest, and some aren’t designed to be long-term fixes, but they’ll definitely help you stop making the same mistakes and get through 18 holes.

FEEL A DRAW TO CURE A SLICE!
Sometimes what you need to feel and what should actually happen in the golf swing are two different things. For instance, if you’re hitting a lot of ugly slices off the tee, it’s likely because you aren’t squaring up the clubface through impact. On the opposite page, that’s exactly what’s happening. From the position you see just before impact, I have very little chance of hitting a straight shot with that open face.

If this sounds like you, and you can’t shake the slice, here’s what I want you to do. Feel as though you’re rotating your wrists or forearms way before you get to the golf ball. This feels really ugly, but the upper-left photo shows you what I want you to feel as you swing the club down and through. So rehearse it a few times, feeling like you’re forcing the clubhead to shut and close prematurely, even though it’s really squaring up in real time.

Once you do that a few times, make your normal swing, but visualize the “ugly” position you just rehearsed. You’ll feel the difference.

RELEASE!
Don’t forget what happens after you make contact! If you’re holding the face open after contact, you can bet the ball will go to the right either as a push or a push-slice. To further rid the slice from your game, practice getting into this position you see here, too. Then, as you make a real swing over the ball, think of this position, as well.

You’ll soon see that how you think about your shot and how the body performs actually can have an effect on helping you make better swings and hit more consistent shots. Also, rehearsing ugly positions like the one above will help you feel more comfortable with your natural golf swing.


_È_STOP SHANKING
Hitting shanks off the hosel is as ugly as it gets! If you’re plagued with this ill, here’s a quick drill to try to hopefully banish your shanks for good.

First, grab two golf balls and position them as I have here, with one where you normally position the ball (white ball) and another an inch or two closer to you (yellow ball). Next, set up over your first ball (white ball), take the club back, and try to hit the inside (yellow) ball. You’ll quickly feel what it means to pull that hosel away from the intended ball you’re trying to hit, helping you make contact more on the center of the clubface. Now, this drill may not be a lasting swing fix, but it can help you put your shanks at bay, at least until you have time on the practice tee with an instructor.

What about on the course? Well, you can’t legally play two balls, but you can certainly pretend while you practice. So if the shanks suddenly appear, imagine the yellow ball inside the intended ball you’re set up to and try to hit. This will quickly force you not to fall or lean into the ball through the downswing; instead, it will force you to stay away from the ball and make solid contact.

This drill/technique may seem extreme and pretty ugly, but it just may be the fear-inducing formula you need to stop leaning into the ball as you swing, which, folks, is the number-one reason why people shank. They shift their weight toward the ball, not toward the target. And, by the way, even if you don’t shank very often, this is a great drill to practice for helping you avoid coming over the top and hitting from outside-in.

SWING WITH MORE CONTROL
Sometimes it seems no matter how you try, you just can’t hit the green. And, often, when I see golfers who are struggling with accuracy from the fairway, they do the opposite of what you should do to try and rein in their shot dispersion. What do they do? Well, many golfers tend to ramp up their swings in hopes that a bigger, more powerful swing will help sync up their swings so they can hit straighter shots. And, in some cases, that may be true! But with a faster, bigger swing, it becomes more likely that a swing flaw you once had will only get worse.

Here’s what I suggest you do when you just can’t hit an iron straight. Switch to the knockdown shot, and start swinging from L to backward L, that means, cutting your backswing and followthrough almost in half and concentrating more on making solid contact than hitting the ball a long way.

By the way, you can still make an aggressive swing hitting knockdowns. I’m not suggesting you should swing easy. Instead, consider shortening your swing and limiting the amount of mistakes that can occur as you take the club back and on the way down. Your shots may not fly as far with this type of swing, but I’ll bet they fly a lot straighter.

STOP THE BLADED PITCH
You can’t see it, but I just bladed this chip across the green. Why? Simple, I didn’t use my legs in the stroke and I attempted to get the ball airborne using my hands and arms. Notice the left-elbow chicken wing? That proves what I did here was stop rotating my body and pull up with my hands. The result was an ugly shot, to say the least.

Hitting a solid pitch shots requires more body motion than people think. In fact, I like to think of my legs as more of a driving force than my arms and hands, which generally stay pretty passive through the stroke. As you can see in the photo to the left, I’ve maintained a good extension of the arms through the hit, and I’ve also activated my knees in the stroke as they turn toward the target. If you’re struggling with hitting bladed shots, consider hitting some pitches with little to no hinge in the wrists. It may feel a little funky and look a little ugly, but it may be just what you need to stop the chicken wing and start hitting some solid shots around the green.

These photos show how subtle golf can be. The top two photos are of a good pitch and the lower two are of a pitch that I’m about to blade across the green. At a glance, they look very similar, right? But upon further inspection, you can actually see several differences in the two shots.

First, my good setup has the shaft more vertical, my head is a little higher, and the ball is slightly further forward in my stance. Next, in my bad swing, you can clearly see as I come into impact that there’s already some separation showing between my body and my soon-to-be chicken wing left arm.

The right move is to keep the knees close together and allow them to turn toward the target as the club passes through impact. That’s what you want.

STOP UNCONTROLLABLE CHIPS
If you’re mis-hitting some chips and rocketing others past the hole, try and miss all your chips. Yes, you heard that right. The “Chang Chip,” as some of my colleagues call it, is a shot I love come time to hit consistent shots from off the green. It’s not the prettiest shot, but it’s rock-steady. Set up as you would with a putter, only use your 7-, 8- or 9-iron. Play the ball in the front-center of your stance and align the shaft so it’s vertical (a slight lean to the target is okay). This raises up the heel, making it easier to mimic a putting stroke in the long grass. Use your putting stroke and play the ball on the fat part of the clubface. It’s likely you’ll feel as though you’re missing the sweet spot, but that’s what you want. With some practice, you’ll see that the Chang Chip is a great option that allows you to be aggressive without hitting the ball too far past the hole. The toe-sided hit will be a deadened shot, so swing the club aggressively for better results.

DOWNHILL PUTTS
Most people assume direction is most important when it comes to putting. The reality is, the speed of your putt is more important. On putts that curve, there are many different lines you can choose to roll the ball, as long as you have the correct speed for that putting line.

Where I see mistakes often made is on downhill putts. They’re usually the toughest to gauge in terms of break and speed. Usually, my students hit downhill putts too hard and don’t play for enough break. When that happens, their putts roll past the hole a long way and they’re left with a lengthy comebacker. No fun!

The quick, ugly solution to help prevent hitting downhill putts too far is to consider playing downhill putts off the toe of the putterface. This immediately deadens the putt and puts a much slower roll on the ball. When you do this, play for some extra break; the ball will be rolling slower and definitely will break more. Give it a try, and watch downhill putts roll a lot slower toward the hole.

BACK TO NORMAL
Remember, hitting you putts off the toe side of the putter is only recommended for touchy, downhill putts. If you’re struggling with your speed and distance control for all your putts, hone in on the sweet spot of your putter and try to hit your putts as solidly as you can. Usually, bad distance control means you’re ignoring the center of the putterface and hitting putts away from the putter’s center of percussion. Make it a priority to hit your putts in the center of the face first, then work on getting your line and speed down.

Randy Chang, PGA, is the Director of Instruction at Journey Golf Club at Pechanga in Temecula, Calif., and has golf schools at Talega Golf Club in San Clemente, Calif., and Back Bay GC in Newport Beach, Calif. For information, visit randychangpga.com.