Let’s talk about the one crucial element of the golf swing to assure power and stability through impact: The weight shift forward.

Actually, the common phrase to describe the initial movement in the downswing is “weight transfer,” but I prefer to call it “pressure transfer.” You’re not moving your entire weight to the lead leg through and after impact; rather, it’s a small shift at first, followed by moving 70 to 80 percent of your foot-on-ground pressure to the outside of your lead leg as momentum carries you up and through the shot. The ball is long gone but what happened in that instant before it left determined which direction — and how far — you’ll head to find it and hit it again. 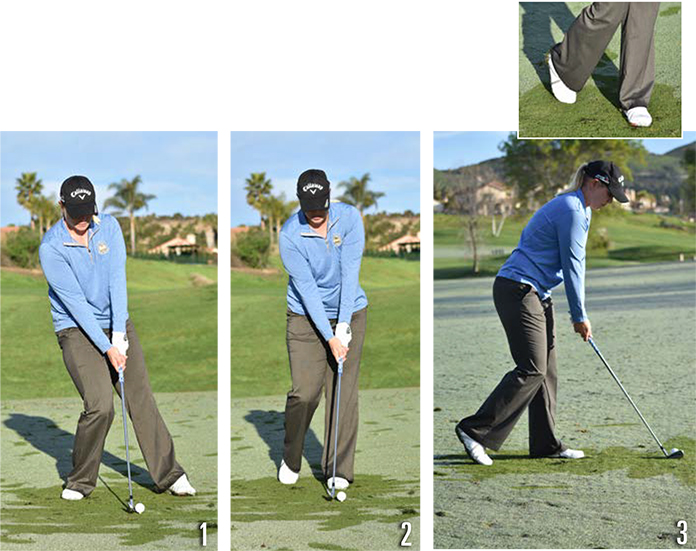 This tip centers on players who pivot on the trail hip but don’t shift enough pressure to lead side, resulting in flipped hands (Photo 1) in an attempt to rescue the shot, followed by a top, chunk or weak ballfight..

Tee a ball up in line with the lead leg, as I’m doing in Photo 2. Take the trail leg and move it back so that just the toe is touching the ground (Photo 3 and Inset). Then take three-quarter swings off the lead leg to feel the sensation of what it’s like to finish more on the lead side (Photos 4-6). 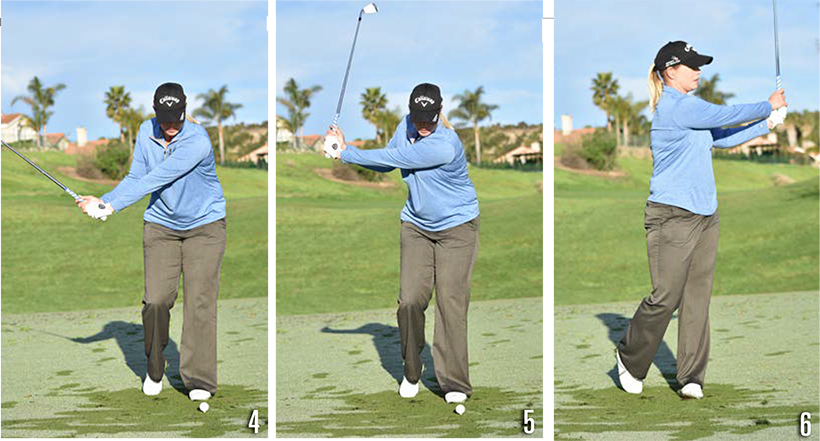 Start without hitting the ball if you’d like, then actually strike the ball. You’ll immediately feel that downward motion, lag and release of stored-up power that the pressure shift allows.

The benefit to this drill is clear. Players who struggle with getting to the lead side often hit behind the ball and lose potential distance as they swing with their arms. The body needs to move toward the target during the down swing, into impact, and to the finish position. Getting the feel of hitting shots off the lead leg will encourage the golfer to transfer more pressure left in a full swing.

Based in Southern California, Alison Curdt is a PGA Master Professional and 2015 LPGA National Teacher of the Year. Contact her at www.alisoncurdtgolf.com