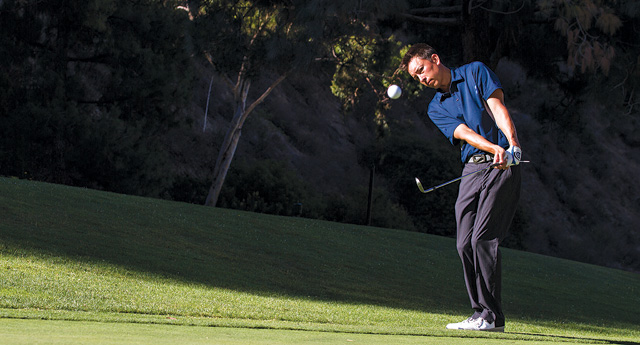 What’s that thing sticking out of the back of my glove? Turn the page to find out how a tee in your glove can help you around the greens.

We all make mistakes. It doesn’t matter if you’re a Tour player or it’s your first time touching a club, we’re human beings, and we’re all prone to making errors every now and then. Out here on the practice tee, I see my fair share of mistakes. And while a big part of my teaching is on full-swing mechanics, many of my students waste strokes around the green, too. In the following pages, I’ve outlined just a few of the common mistakes I see golfers make, and I’ve brought some simple fixes to help you get back on track.

PITCH IT LOW
One of the most common mistakes I see is when my students try the hinge-and-hold approach with regard to their chipping and pitching. This means, they hinge the club going back and hold that hinged position into the finish. This shot sometimes works, but it’s a tricky one for beginners, and you actually create a lot of backspin that way. To hit a low-rolling pitch shot, allow the hands to release and the arms to rotate through the shot. To illustrate, I stuck a tee pointing out of my gloved hand. Through impact, I want that tee pointing down. Try it yourself and watch which way the tee points. If it’s level or pointing down, that means you’ll hit a low roller.

This means the gloved hand will pronate (bend backward), but don’t worry. That’s necessary for applying the needed loft of the clubface onto the ball. As for the swing, it stays the same. And, by the way, creating excessive backspin when chipping is rarely a good idea. It’s too unpredictable.

EVER WONDER WHY WE SHANK THE BALL?
Shanked shots are the absolute worst shots in golf. A shank can happen several ways, and you can shank the ball off more places than the heel of the club. If you look at how a club is designed, it’s almost as if you’re predestined to shank anyway! First of all, the clubshaft and the clubface don’t exist on the same line. Because of it, we actually have to swing the clubshaft to the side of the ball, not directly at it. This throws some folks sometimes and makes shanks easier to do and more likely to happen. Things would be a lot easier if iron heads were situated the same way some center-shafted putters are, with the shaft pointing directly at the golf ball!

LIFT BEFORE YOU SWING
If you’re plagued with the shanks, a great drill to get your ballstriking back on track is to do what I’m doing here. The goal is to ensure the clubface won’t over-rotate too far open on the takeaway (a common fault I see in people who shank the ball). Set up to the ball as you would normally, then before you take the club back, hinge the clubhead straight up. From this position, continue the backswing with no independent hand action, meaning don’t roll the hands; instead, turn your chest away from the ball.

At first, it may seem tricky and challenging to make solid contact with the ball from this hinged position, but with practice, you’ll quickly develop a better feel for initiating your backswing with your chest, not by rolling the hands and opening the face too much.

THE CLUBHEAD IS WEIGHTED TO SHANK!
Another reason why we sometimes struggle with the shanks has to do with how an iron is weighted. Irons have the bulk of their weight in the toe, meaning the headweight is somewhat unstable as you initiate the downswing. To illustrate, think of carrying a bottle of wine upside down versus carrying it right side up. If you grab the bottle by the neck when right side up, it’s much more stable than it is when you hold the bottleneck with the top down and the bottom up.

Irons, unfortunately, require you to hold them as you would an upside-down wine bottle. This means the clubhead easily fans open going back, which means when you open the face too much, you’re less likely to square the face at impact and the ball will meet the clubhead right on the hosel.

To help create some stability, don’t feel as though the toe of the iron needs to face the sky in the early part of the backswing. If anything, better iron shots come from an iron that stays a little closed, as you see here. The reality is, by keeping the clubface slightly closed, it’s actually tracking square to the path the clubhead travels on. Also, keeping it closed a little helps you feel the clubhead more, leading to more consistent shots.

HANG LOOSE
Another problem that I see from my students is that they aren’t sure how close or how far to stand from the ball. It’s not only important in terms of how well you contact the ball with the clubface, it can affect your ability to swing freely and without hindrance. A great way to check is to note how far the handle is from your leg by using the “hang loose” sign.

Now, I know, you may look a little silly doing this, but checking the separation between the hands and your leg will help you swing the club on the proper plane. And it’s not just to check if you’re too close. If you’re too far from the ball, the “hang loose” drill will help you get a little closer without getting too close.

When situated correctly, the arms should hang vertically, and hopefully, the grip end of the club should point at or close to your belt buckle. From here, you should feel as though you’re making a free and relaxed swing, knowing you’re the right distance from the ball. Also, at impact, the hands should be, again, a “hang loose” away from the body.

Don’t miss Zach’s new and interactive ebook on how to stop shanking the ball for good! It’s available right now for download at zachallengolf.com/books.


STEP INTO IT
Almost every student of mine asks me how to hit it farther, and of the ones who really struggle with power, they struggle because they don’t engage their lower body correctly. Instead, they swing with their arms and hands, which sometimes actually can slow your swing down.

To ramp up your power, try this simple drill. Take a slightly narrower stance than normal and cross your arms in front of your chest. Next, simulate your backswing all the way to the top. Once you get to the top, the drill kicks into gear–literally. Lift your left foot and plant it firmly into the ground about 3 to 4 inches from where it originally was.

Do this drill correctly, and you’ll quickly feel as though the body not only wants to shift its pressure to the left, but the upper body will want to uncoil toward the target. After all, upper body and arm speed come from first building the foundation of the lower body for the upper body to rotate against. Practice this drill repeatedly, and you even can do it between shots to remember to drive the downswing with the lower body, not with the arms and hands. And, yes, this is true for both woods and iron shots.

TILT TOWARD THE BALL
Another common mistake I see on the practice tee is the lack of retaining the necessary shoulder plane through the swing. You want the shoulders to stay tilted as you take the club back and through. If you come up and lose your shoulder plane, any chance of swinging the club on the proper plane greatly diminishes and hurts your ballstriking.

To practice retaining the necessary shoulder plane, practice what I’m doing here: Hold a club in front of you, and as you take the club back and through, make sure the clubhead end points toward the ball during the backswing, with the grip end facing the ball after impact.

FORWARD LEAN AT INPACT
Ever wonder how and why Tour players can hit their irons so far? If you want to start hitting your irons like Rory, you have to understand what it means to stress the shaft of the club away from the target. Simply put, stressing the shaft away from the target means getting it to bow backward like you can see I’m doing with the alignment rod. Now, your actual shaft won’t bend that much, but the goal is to get it to bend away from the target as you move into impact, and when it does release, you want it to do so with your hands forward. If you can postpone that release, you’ll effectively deloft your iron and create tremendous power.

Practice with an alignment rod, feeling as though you can stress the shaft away from the target. You’ll feel as though the shaft is ready to release the more you bend it, which is exactly the feeling and sensation you want with your irons at the moment of truth. Remember, the shaft is the engine of the club, and how you control it affects your distance and control.


BACKWARD LEAN AT INPACT
Often, I see students who struggle with getting the ball airborne make steep swings with their driver. The fact is, the driver is the only club in the bag you use to ascend into the ball. To ingrain a better feel for ascending into the ball, grab an alignment stick and make a few rehearsal swings. The goal is to feel as though the low end of the stick releases as you make contact. You can see in the photos above that’s actually happening with the stick, and the actual shaft is releasing a split-second before impact, not after impact like it does with an iron. Now, whether this is a matter of a camera trick with the shutter speed or not, the point is still the same. Hitting better drives comes from hitting up on the golf ball, not down onto it. Adjust your ball position and aim so you catch the ball when the club has already released and moves up. You’ll hit higher and straighter tee shots.