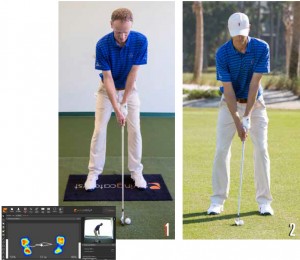 In looking at the greats of the game from yesteryear, many players lift the heel — the lead heel, that is — on the backswing and then slammed it down again to start the downswing motion. With the advent of technology such as Swing Catalyst balance plates, we can now see and measure the kinetics of the swing while assessing how footwork can affect club movement. Since working with the Swing Catalyst in our coaching at the Golf Learning Center, we have realized how such common swing faults as “early extension” and “casting” can be easily cleaned up with improved footwork. Also we have been able to create more power in clients’ swings by focusing on the timing of the foot-to-ground connection.

Before you start to work on downswing foot mechanics, let’s look at the start of the swing to create a foundation for what is to follow. At address feel as though you have 55% of your pressure on your lead side, as shown on the Swing Catalyst in our indoor practice facility (Photo 1, with an inset showing the percentage on the Catalyst computer screen) and on the course (Photo 2).

A great way to achieve this set up balance is with the following motion-based exercise. First, set up in your normal address position. Next, lift the TRAIL foot slightly off the ground and then put it back down to the ground (Photo 3). As soon as the trail foot hits the ground (Photo 4) swing the club back (Photo 5). This will give you a higher percentage of pressure on the lead side before you swing the club but you will easily shift the pressure to the trail side on the backswing.

Once you are comfortable with the balance in the set-up, it’s time to look at how you want to “unweight” the lead foot on the backswing. As your arms and club swing back, pressure will leave the front foot and start moving to the rear side so that by the top of the backswing you will have between 60% and 80% pressure on the back foot. Your upper body will have rotated within the spread of your feet; however, to help ensure the pressure has shifted to the trail side, allow your lead heel to lift from the ground. When the front heel lifts your front knee will rock inwards slightly towards the trail side, as in Photo 6 (on the Swing Catalyst, with inset showing this move on the computer) and Photo 7. 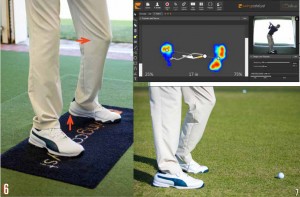 Now that you are loaded into your trail side near the top of the backswing, you have to aggressively move that pressure back towards the front side before your club changes direction at the top. Here is where the classic heel slam truly helps the body pivot in the swing. Aggressively push the lead heel back towards the ground early in the transition from back to downswing as in Photo 8 (again on the Catalyst, with the transition captured on screen) and Photo 9. This will move your front side of your body toward the target as your pressure quickly starts shifting back toward the target. This is a critical move with the body to eliminate early extension and casting. Your pivot will support the hand path and club movement on the down- and through-swing. 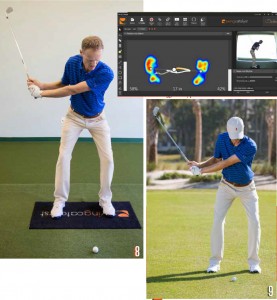 By slamming the lead heel to help sequence the downswing, your pelvis will move laterally to the target and drop slightly as your body squats into the ground by the time your lead arm is parallel to the ground. If your swing is plagued with early extension of the body on the downswing (Photos 10 and 11, with the Catalyst screen clearly showing weight out on the toes), this is a move that’s critical to blend into your downswing motion. When your pressure moves forward into your toes and stays there in the downswing, your pelvis has no option but to move inward toward the golf ball. This creates ball flight errors of blocks and hooks and general inconsistency of club movement through the hitting zone. 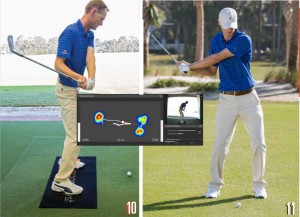 Casting of the club, also known as early release of the hands, from the top of the downswing is something that we see frequently in amateur players on the practice tee. This occurs when the lower body doesn’t move laterally early in the downswing so pressure stays, or often increases, on the trail side in the downswing. Photos 12 and 13 show this all-too-common flaw; the Catalyst inset shows too much weight remaining on the right side. By slamming the lead heel into the ground to start the downswing transition you will be able to keep the shoulders stable as your pressure moves towards the target. This lateral shift of the lower body keeps the hands relatively calm in the first half of the downswing so that it appears they wait until the lead arm is parallel to the ground to start pitching the club head out. 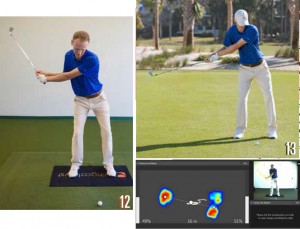 From this balanced and slightly squatted midpoint of the downswing, it is possible to start lining up the club at impact with the lead arm and make the hand path move up and inward, as in Photos 14 and 15 (the Catalyst screen shows almost full weight transfer at this point in the swing)

This is a powerful motion that also produces clubface control and accuracy of ball flight. Having the ability to push off both feet from the ground at near lead-arm-parallel on the downswing helps rotate and elevate the pelvis, which in turn aids the club head to whip through the hitting zone.

Having great footwork is important in any sport, so head to the range and instead of working on club positions, work on the movement of your feet. Lift your front heel on the way back and then slam it down again so you can use the ground to power your swing and increase your ball-striking consistency.

Tim Cooke is Director of Instruction at Sea Pines Resort on Hilton Head Island, South Carolina,  home of Harbour Town Golf Links, one of the PGA Tour’s favorite stops. Read more about him and his golf school at www. seapinesgolfinstruction.com and follow him on Twitter @TimCookeGolf

Editor's Note: This story was updated in April 2018