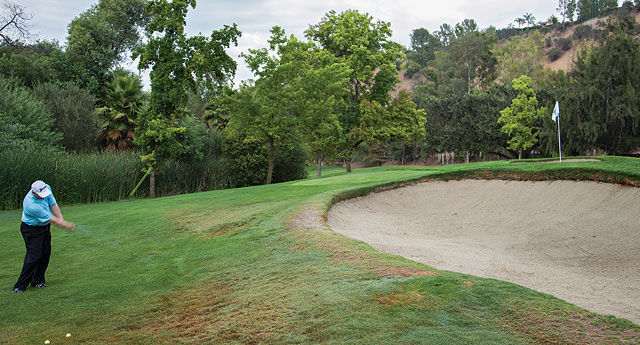 Golf can be a very complicated game. Trust me, as an instructor for many, many years, I’ve seen the game at its most complex levels, especially regarding the golf swing from a mechanical standpoint. But in my study and profession, I’ve come to learn that learning to swing well and learning to play the game well aren’t anywhere near the same. Sure, we can get into the nitty-gritty of your swing on the practice tee, but that’s where it should end. As soon as you tee it up, the mind should be free of distractions and complicated information.

To play better, try and think less. That doesn’t mean shut your brain off completely. Instead, whittle down the tips and info you get from your teaching pro into simple, easy-to-remember bullet points for when you’re out on the course. Here are some of my favorite things that you should think about the next time you play. And, again, leave the heavy stuff for the practice tee!


ACCELERATION
Here’s a typical scenario that can ruin a decent round for many players. I’ve missed the green with my approach shot, on the far side of the greenside bunker. I now face a shot from light rough, over a bunker with no green to work with. Like so many situations in a round of golf, my expectations must line up with reality to hit the right shot and avoid a big mistake. The key here is to get the ball on the putting surface as close to the hole as possible without taking any risk of hitting it short into the face of the bunker. That, folks, would be the worst.

There’s a laundry list of things you can think about on this shot. Open the face, hinge early, use the bounce, hit the toe, hit down, use your pivot, etc. Playing your best golf only will happen when you simplify the process and focus on one positive, specific thought. On this particular shot, I’ve found that maintaining a steady acceleration through the strike produces consistent results. Many players struggle from this area because they allow the fear of missing the shot to influence their technique. When there’s fear, there’s an inability to move, which often leads to deceleration and the inevitable fat shot into the sand. I would recommend you focus on steady acceleration during the practice swings and
repeat the same process when hitting the shot. Remember, one positive thought is all you should think about. In this case, it’s to remember to accelerate through the shot.

SPLASH IT OUT
To most amateurs, the notion that hitting from the sand is much easier than from the rough makes little sense. However, the simple truth is that playing from a greenside bunker is one of the only times in golf when you don’t have to strike the ball first. As a result, the need for precise contact isn’t as critical from the sand, thus making this shot much easier than many people think.

The litany of swing keys I’ve heard from students who struggle from the sand is both sad and comical. Put all of the technical mumbo jumbo aside and remember how a good sand shot is executed. The ball will fly out of the bunker on the sand it’s sitting on. Get the sand out of the bunker and the ball will come with it. It’s that painfully simple. This is best achieved with the weight slightly forward, the upper body tilted away from the target, the feet far apart and the clubface laying back or slightly open. Once the setup is established and consistent, the simple swing thought is “splash it out.” When you’re focused on splashing the sand and ball out of the bunker, you’ll take care of the hitting down, swinging through to the finish and following through keys that have long been part of your checklist. Remember, just think about splashing it out, and hitting sand shots will become a strength in your game.

STAY CENTERED
Hitting a three-quarter wedge shot can cause even the best players to experience some apprehension. Add an uneven lie and some wet turf like I’m hitting from here, and heart rates can really climb. While some lateral movement off the ball can be just fine when trying to max out your clubhead speed with a driver, it never ends well with the intermediate wedge. It’s critical that you strike all of these intermediate wedge shots ball-turf, especially from the lie I’m working on. This is best achieved by focusing on keeping the upper body and head stable and centered during the swing. While moving laterally away from the target during the backswing can still produce solid shots, it increases the degree of difficulty and inconsistency. Stay centered, and you’ll improve your intermediate wedge shots significantly.

AROUND, NOT UP AND DOWN

Nothing makes the recreational golfer clam up like a 40-yard wedge shot. While this isn’t a full swing, it’s still long enough to require some pivot assistance to hit the ball far enough to get it to the hole. If the swing is dominated by the arms and hands and lacks sufficient body rotation, the contact will stink and the shot will be unsuccessful. The focus should be on making this shot with a mini-swing rather than a big pitch. This means there must be participation not only from the hands and arms, but also from the body and feet.

To become more reliable from this distance, just think about making a swing that’s more around and less up and down. This will encourage your body to become a participant in the swing, limit the action of the hands and wrists, and produce better results.

BELLIES UP
One of the biggest misconceptions about the golf swing is that you should “turn in a barrel” to hit good shots. This advice was interpreted as if the body never moved laterally during the swing and only turned in place going back and coming through. The reality is that nothing in the golf swing looks the same going up and coming down, nor should it. Instead of thinking of turning in a barrel, I would rather have you focus on knocking the target side of the barrel out with your tummy through impact. This not only will get your lower body moving farther than your upper body on the downswing (a huge key to producing solid impact alignments), but will also get your feet, legs and butt involved dynamically during the swing. The result is a massive increase in power and significantly better contact. Remember, just think about getting that belly up and forward toward the target, and you’ll see a huge jump in your ballstriking ability.

ONE KEY THOUGHT
I’ve been playing golf for over 35 years and have learned the hard way that multiple swing thoughts when playing golf won’t work. The best thoughts are positive in nature (make sure you tell yourself what to do instead of what not to do) and help you relax. I also prefer the focus to be on the downswing instead of the backswing. I like to think of keeping soft hands as I start the downswing. A practice or rehearsal swing before hitting the shot to reinforce the thought is often a good thing to keep you organized. Regardless of what the swing thought is, make sure there’s only one. Remember, just think about one thing during your swing and make it positive.

LET IT GO
You can’t micromanage the clubface at impact, no matter how hard you try. Almost without exception, the longest and straightest shots you’ll hit occur when you’re letting it go through impact and not guiding it. This relates well to other sports, like baseball. If you’ve ever pitched when you’re tightened up, you know what I mean.

In these two photos, you can see the difference between having the arms bunch up at the shoulders as I try to steer the clubhead through impact. In the upper-right photo, I’ve “thrown” the club out away from my body and let my arms extend after impact. Not only will this produce significantly more power, it will allow the club to “release” properly, taking care of my impact alignments. There’s absolutely no amount of effort that can make the club line up; it must come from being relaxed. Remember, just think about letting it go and eliminate the desire to steer the club through impact. You’ll hit the ball infinitely better.

If you’re struggling with your putting, maybe you’re not catching the ball solidly. Mis-hits aren’t just for full-swing shots, and a mis-hit putt can greatly affect how well the ball travels on your intended line.

To ensure you make solid contact, focus more on a specific part of the golf ball. I like to remind myself to look at the side of the ball where the putterface will come into contact. This narrow perspective helps me focus more, and I hit the center of the putterface more often.

DON’T CARE
All great putters have one thing in common: They aren’t trying to make putts. A common theme you’ll always hear when listening to really good putters is that they’re trying to relax and get the ball started on their intended line. When this is the mentality, the putting stroke has a palpable rhythm that’s smooth and seamless. If you watch someone who struggles, the putter will swing at different speeds during the stroke, and there’s an abruptness that’s often disturbing to watch. Forget about the arc, release, straight back and straight through, acceleration, etc. Just let the putterhead swing freely back and forth. You can’t force the ball into the hole; don’t even bother trying. Remember to just think about letting it go and don’t care about the result. You’ll be amazed at how many putts you make.

Brady Riggs, PGA, teaches golf in Southern California, including at Calabasas Country Club, where these photos were taken. Visit bradyriggs.com for more information.