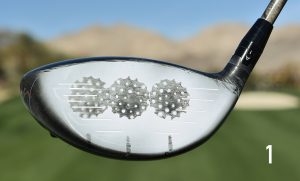 Boiled down to its essence, golf comes down to the ball meeting the club face for a split second. That’s it. And as we all know, if either of those two elements is out of place or coming in at the wrong angle at impact, bad things happen. I’m here to help you build club face awareness, which will lead to eliminating one of the game’s most dreaded shots. Then we’ll take that better ballstriking confidence and apply it to planning where to land each shot.

Do you know if you made a good swing and hit a bad shot due to the impact location on the club face or if the bad shot caused by poor club face alignment at im-pact? In this lesson I’ll show how hitting the ball on different parts of the driver affects how it behaves in flight — and how you can hit fades and draws on demand. It all starts with face awareness.

For better face awareness, try this drill: Spray the club face with Dr. Scholl’s Odor-X spray power or another similar spray that will leave a white residue. Try hitting three shots in this order, as shown from left to right in Photo 1: 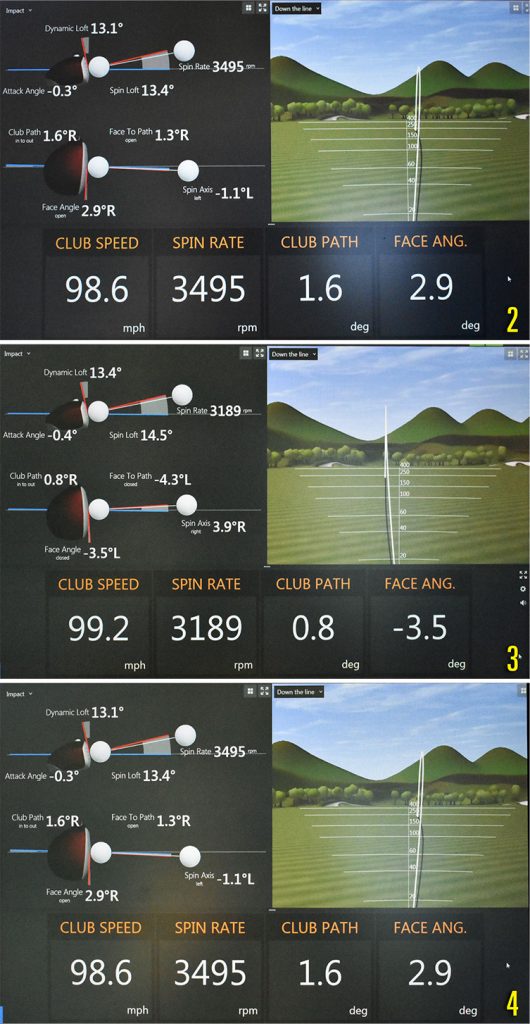 Notice the gear effect in Photo 3. The club was swung inside-to-out or to the right with a very closed club face. If the ball was struck in the center of the club face, we would see a big hook. When you look at the dark line depict-ing the actual ball flight, you see a slight fade. This left-to-right ball flight is due to the contact point being well toward the heel of the club.

In Photo 4, you can see the gear effect of when the ball is struck on the toe of the driver. In this picture, at impact the club face was aimed more to the right than the club path. If this shot was struck in the middle of the club face we would expect a push slice. However, the ball started to the right of the target and curved to the left, a draw. This curvature is due to the ball being struck on the toe and the resultant gear effect.

Most golfers don’t know why the hit a shank. In my experience, it is almost always caused by one thing, the golfers’ hands moving out away from their body and toward the ball during the transition from their backswing to downswing. To train the correct motion, try this simple drill: 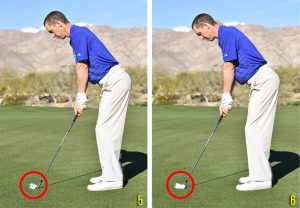 Line up to the ball normally. Make sure your weight is on the balls of your feet or about where your shoelaces end, as I’m doing in Photo 5.

Once set up, you should have approximately one fist width from your left leg to the butt end of your grip (Photo 6).

Starting at your normal address position (Photo 7), move the club head away from you so that the ball is now lined up off the hosel of the club, just as if you were going to purposely shank it (Photo 8). 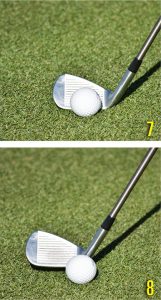 Swing back and try to hit the ball off the toe of your club (Photo 9). This motion will reverse the hands moving away from you pattern that causes a shank. You can see that my hands are closer to my body then when they started. This further-away-to-closer motion will get rid of the shanks! 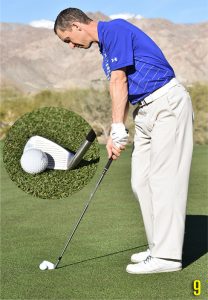 Here’s another useful drill: place a line of tees in the ground just outside the club head and hit balls without hitting the tees, as I’m demonstrating in Photo 10. 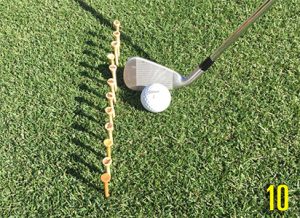 For each shot you play in golf, your objective should be to “hit/stroke the ball toward your selected target to the best of your ability at that moment in time.”

Picking specific targets will help you get focused on the positive aspect of what you want to happen rather than the negative outcomes that are possible. Your mind doesn’t register negatives, so it’s imperative to success that you focus on what you want to actually happen.

In Photo 11, the majority of the trouble is short (water) and left (bunkers). If you tell yourself “don’t hit it in the water,” your brain registers the word “water” and figures out a way to hit it in the water 9 times out of 10. If you don’t want to hit it in the water, then you do want to hit it somewhere else. This somewhere else may be the opposite side of the fairway or green or, or to the right or the back of a green instead of the front part. No matter where that target is, select a target that is small enough that you can focus your eyes on it each time. In Photo 12 you can see that that I’m lined up straight at the pin, but I’m making sure to take enough club to take the water out of play and maybe even be a bit long. This will help you have a positive thought and clear picture of where you want to hit it before you step up to each shot.