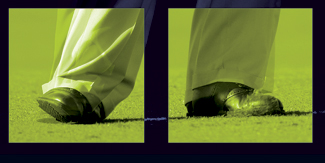 Just how important are the feet, legs and hips, but most importantly, golf footwork? Well, some argue that they are the heart and soul of the golf swing.

In fact, it was Byron Nelson who brought us the idea of flexing the shaft with the lower body. Jack Nicklaus also has repeatedly said that the swing begins from the ground up. Then why, despite advice from two of the best golfers who ever played, does the average golfer try to muscle the ball with his or her upper body?

Call it human nature or call it ego, we typically try to throw balls faster, lift things higher and push things farther by using our upper body. We haven’t trained our minds to use the lower body, which is where real strength comes from. Your legs are much stronger and more powerful than your arms and, if used properly, can produce the distance you never knew you had, accuracy like you’ve never seen and a much more consistent ballflight.

The importance of proper footwork and use of the legs is critical to a repeatable, powerful and consistent golf swing. Your lower body serves as the engine of the golf swing by pushing against the ground and creating the necessary torque, tension and momentum to make the club go faster. And more speed always equals more distance. 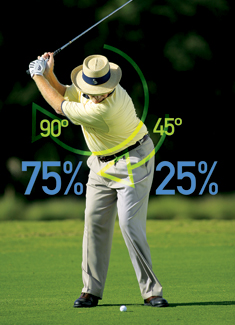 How The Lower Body Works

Whether it’s Ernie Els, whose feet appear to move very little during his entire swing, or Jack Nicklaus, who nearly lifts his entire left foot off the ground during his backswing, there’s a key similarity to both players: Both use the lower body as a tremendous source of power and consistency.

As you take the club back, your torso begins to turn. Because your feet are planted on the ground, your legs can resist this rotation, thus creating what’s called torque between your lower and upper body. Ernie is much more flexible than Jack and doesn’t need to lift his left foot as high as Jack does, but nevertheless, both players are applying a huge amount of torque to their backswing. Lifting the left heel is a natural movement and should never be forced. It’ll happen all by itself, depending on your level of flexibility.

As your body continues to turn, 75 percent of your body weight is transferred to the back foot, thus charging the right leg with the desired muscle tension. Remember, torque is a good thing and results in a stronger release through the golf ball.

At the top of a proper backswing, the shoulders have turned somewhere around 90 degrees while the hips have turned only 45 degrees. The greater the difference in these two angles, the more torque the body develops between the upper and lower half of the body. This, in turn, means more power transferred to the ball. Your lower body is loaded with energy, torque and tension–just waiting to release. This is where real power comes from, and it starts from the ground up. 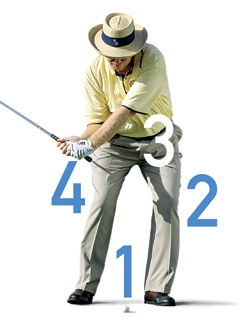 1. During the transition from backswing to downswing, weight is transferred from the back foot to the front foot, and the hips move slightly toward the target.

2. About midway through the downswing, there’s a slight downward movement of the knees. This places weight and pressure into the ground. At this point, the golfer is using the ground as a lever on which to push up. The greater the push into the ground, the greater the clubhead speed. To help grasp this concept, think of a sprinter about to take off at a race. When the gun fires, the sprinter pushes off the sprinter’s block, thus propelling him forward. This same principle is applied to the golf swing by using the ground as your block and pushing against it for added power through the downswing. It’s also what Byron Nelson meant by flexing the shaft with the lower body and using the ground as a lever.

3. The hips shouldn’t begin turning until the club is waist high in the downswing. Once they do turn, weight transfers over to the front foot. The hips open up at impact, and as this occurs, weight moves over the outside of the left heel. At this position, your lower body has begun releasing energy toward the target and the upper body is about to release. As you can see, it’s the lower body that enables the upper body to do the work!

4. At impact, the hands, arms and upper torso catch up to the lower body, releasing all the stored torque and power that was wound up during the backswing. Due to the leverage created by your lower body and the ground, your upper body is now moving so fast that it outpaces the lower body and out-rotates the hips by 45 degrees at the finish position. Presto! The golf swing is complete!

As I mentioned, 75 percent of the body weight is transferred to the back foot during the backswing. Through the downswing and finish, the weight transfers from the back foot to the front foot. Too often, amateurs force this shift in weight by sliding and swaying from side to side during the backswing and downswing. This is not necessary! With correct footwork, you should automatically make the correct amount of weight shift.

Many golfers try to shift their weight to the right heel on the backswing and to the outside of the left foot on the downswing. This is wrong! Yes, weight should move to the right heel on the backswing, but during the transition, it should move to the left toe. Only through impact should weight shift to the left heel. This pattern–as well as several faulty renditions–were identified using a force platform by Dr. Michael Thompson of Delta State University.

To get a feel for using your legs and correctly shifting your weight during your swing, try the following drills.

Practice with your right leg butting against an object to get a solid feel for bracing your right side. In this case, we’re using a bench. As you simulate your backswing, you should feel your knee pressing firmly against the bench, creating torque and building energy. If your right knee isn’t touching the bench during the backswing, it means you’re not shifting your weight correctly to the right side. Keep making practice swings until you feel consistent pressure between your knee and the bench.

To prevent sliding from side to side, practice making a few swings with your left foot on a range ball basket, which will cause an exaggerated tilt of your entire body to the right. Carefully take the club back as you normally would and feel the sensation of your weight on the right side. Perform a series of swing repetitions with the basket and then remove the basket and make a normal swing. You should feel a weight shift to the right without the need to slide your body to the side.

As you take your club back during the backswing, you want to avoid locking your right leg. Locking robs power and consistency from any part of your swing. It also restricts a fluid weight shift to the left side during the downswing. To alleviate a locking right leg, practice several swing repetitions with a golf ball under your right heel. This will help you retain the correct right leg flex throughout the entire swing.

Often when golfers try to muscle the ball, they make huge upper body rotations, causing their upper body to lean toward the target during the backswing and, therefore, put too much weight on the left side of the body (right side for lefties). Folks, this is the key ingredient to the dreaded reverse pivot, which, when executed, results in violent slices, hooks and pulls. The trick is to not overswing with the upper body, but, instead, use the lower body for added power! To alleviate overturning, try a few practice swings with your left foot completely off the ground during your backswing. This will restrict your upper body from moving to the left and help you get a feel for the correct turn and weight shift to the right side.

Practice each of these drills and you’ll be on your way to using your legs to help generate more power and consistency. In no time, you’ll find it easier to make long, smooth swings with added strength from the lower half of your body.

Your golf shoes are the only connection to the turf against which your swing is built, so it’s important that they’re able to support and augment the dynamics of the swing. Some materials and designs handle this requirement better than others.

Among the premier materials used for high-quality outsoles is thermoplastic polyurethane, or TPU. This material is a very durable, flexible, weather-resistant elastomer that tends to last longer than standard rubber outsoles. According to Doug Robinson, product development manager at FootJoy, One of the many advantages TPU has over rubber is the ability to mold it in varying degrees of density. We can create assorted densities of TPU to serve different functions for the parts of the shoe that require flexing as well as areas that require more firmness.

The ideal golf shoe is not only stable, but comfortable as well. EVA (ethyl vinyl acetate) is commonly used for the utmost in shoe comfort. It’s the foamy, cushiony layer found in most shoes. The EVA layer makes the shoe lighter while the TPU keeps the shoe stable, says Robinson. It’s the definitive choice for lightweight cushioning.

In the area between the heel and toe portions of the shoe (where the foot arches), manufacturers have experimented with lightweight shanks for minimal twisting and stronger stability. With the P.R.O. outsole design of our DryJoys, we’ve placed an aluminized fiberglass shank closer to the foot by cutting out the middle portion of the outsole, adds Robinson. This design helps the foot to resist twisting during the swing. It’s a breakthrough that provides outstanding stability without sacrificing cushioning, flexibility or traction.

2000 PGA Teacher of the Year Dr. Jim Suttie instructs at The Club at Twin Eagles in Naples, Fla., and Green Garden CC in Frankfort, Ill.