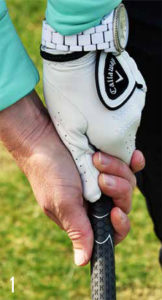 While a lot of golf instruction focuses on ridding a student of a slice — it is, after all, the most widespread problem among amateurs — not enough attention is given to the other shot that bedevils a lot of golfers, especially from the tee: The Duck Hook.

It’s a nasty shot that often goes deeper into the junk or trees or water than a slice, simply because it has more topspin and is usually on a lower trajectory. The old adage “you can talk to a slice but a hook won’t listen” is definitely true.

The duck hook is caused by a combination of issues, starting with the grip, so let’s tack them one by one.

This "Gorilla Grip" can be causing excessive shutting of the clubface (Photo 1). Try to let your right arm hang freely, then grip the club with your right hand and palm facing more downward versus palm to the sky. 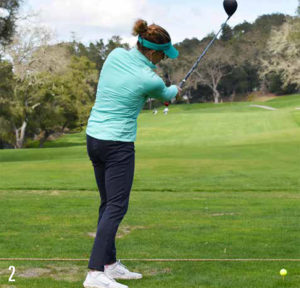 If you feel like the club is exiting too high and right on the follow-through (Photo 2), you’ve probably hit either a weak push or, yes, a duck hook — the latter because such a swing path will result in clubface shutting too quickly and loss of posture. 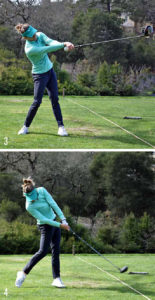 The “hang back and flip” move (Photo 3) — in other words, not initiating the downswing with your lower body, leading to the dreaded over-the-top move — will make your swing rely completely on timing and expose you to both blocks and hooks.

Let’s concentrate on the moment of truth, the downswing, to get you on the path to straighter drives and send the duck hook packing. Try this: Ditch the inside out move and instead send the club and arms DOWN and IN to stabilize your clubface (Photo 4). Let the momentum of the club take you into a balanced finish, rather than getting stuck on your back foot.