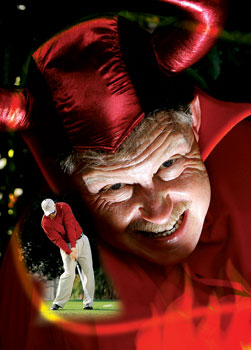 There are a number of reasons why the majority of recreational golfers never seem to get better. Lack of serious practice and playing time are major contributors, as are a lack of proper physical conditioning and improperly fitted clubs. But perhaps the most significant cause of most golfers' inability to improve is poor instruction. I'm not necessarily referring to what your local PGA professional told you at a recent lesson, but more to what you've probably read or heard over the years, maybe from your father or a good friend. Anyone who has played golf at all is familiar with the old adages, Keep your head still and Finish high, and most of us have tried at one time or another to swing with these things in mind. These error-fueled tips have stood the test of time because, on the surface, they appear sound. Their intended application, however, is all too often misunderstood, leading to poor swing thoughts and techniques that destroy any chance of solid shotmaking. Moreover, many, if not most of the old sayings regarding golf instruction are just wrong.

The good news is that times are changing for the better. With the use of modern video techniques, as well as more intense technical analysis, many modern golf professionals have found the truth behind the various myths and have tailored their instruction accordingly. By incorporating the good swing techniques and ridding your game of the bad ones, I guarantee you'll be able to develop a more consistent and powerful swing. We'll discuss six myths here–avoid these and you'll be on your way to lasting, positive improvement. 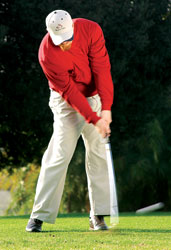 Myth 1 "Stay Behind The Ball"
We've all tried this one–most likely have done it wrong more than our share of times. The origin of the stay behind the ball myth can undoubtedly be traced to some ancient golf instructor's desire to prevent his student from sliding past the ball before impact. And it's true, moving laterally in the downswing to the point where your legs are past the ball is bad technique and a great way to hit short, weak shots.

Staying behind the ball for most golfers means not rotating enough through impact, and instead, leaning back on the rear foot. This leaned-back position not only puts significant strain on your back, but also causes a ton of problems in the swing, most notably a breakdown of the arm structure and wrists at impact and a high incidence of the dreaded chicken wing.

Instead of trying to stay behind the ball, allow your head to lead your upper body toward the target on the downswing and through impact. I know it sounds contradictory to what you've probably been taught, but this is the technique most good players use. Not only will moving your

upper body forward create a more stacked position (your upper body straight above your lower body), but it will also encourage a flat left wrist at impact–a must for solid contact.

Myth 2 Keep Your Head Still
This is one of the most misunderstood myths in golf instruction. Yes, most fundamentally sound golfers maintain a certain degree of stability in their neck and head during the swing, but locking them in place, which many recreational golfers attempt to do, is a big mistake.

In fact, the head should move laterally in the backswing (away from the target) and then toward the target in the downswing. If you lock your head in place during the backswing, a number of bad things can and will happen, including the dreaded reverse pivot. In addition, a severely reduced shoulder turn also is likely to occur, limiting clubhead speed and potential power. A lack of shoulder turn will also tend to cause your hands and arms to become too active, forcing the club straight up and off-plane, instead of around your body. Another bad result of locking your head in place is a dropping of your head, which leads to a change in spine angle and an off-plane swing.

By allowing your head to move properly during the downswing, a number of good things can happen. Most importantly, it will encourage a free and complete shoulder turn, creating a dynamic, athletic motion. Also, the shoulders will be able to turn on the proper plane because the spine angle achieved at address will have been maintained. Finally, properly moving your head will reduce the need for excessive hand and arm movement during the swing, increasing accuracy and consistency._Ê_Ê 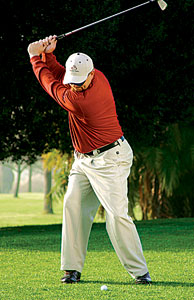 Myth 3 Shift Your Weight On The Backswing
Shift your weight on the backswing is another golf instruction myth that's often taught–and just as often misunderstood. You do want your weight to move to your right side during the backswing (for a right-handed golfer), but you don't want your weight to move outside the right hip. Unfortunately, for many amateur golfers, shifting the weight during the backswing entails moving the back hip laterally, away from the target, also known as swaying. This move not only tends to create a reverse pivot, but also hinders the proper turning of the shoulders and hips. In addition, a lateral move of the back hip makes it much more difficult to move the body toward the target in the downswing, leading to poor impact and numerous fat and thin shots. Finally, an improper lateral move in the backswing increases the need for the hands and arms to control the club.

The proper way to shift your body weight in the backswing is to turn your back hip in a clockwise direction, behind your body, instead of moving it laterally. This type of move will encourage your body to stay between your feet, increasing both leverage and power. A sharper, more substantial turn of the shoulders also will be possible, which enables the body to move into the ball properly at impact, resulting in longer, straighter shots.

Myth 4 Coil The Shoulders Around The Hips
Creating power by coiling the shoulders around stable hips is a great technique if you have the flexibility and balance of Fred Couples. But because the vast majority of golfers in the world simply can't rotate their shoulders substantially without also rotating their hips, this technique is one that hurts more people than it helps. The most common problem related to this technique is the creation of an overly steep, outside-in swing plane that produces mostly slices and pulls. By trying to create more torque and more power, most golfers actually lose distance, not only due to slicing, but also because of an overall shortening of the swing itself.

My recommendation is to use the entire body to turn against the ground, instead of just using the shoulders against the hips. This technique is much easier and produces much better results. The main reason for this is fairly simple: Body torque is needed most in the start of the downswing, not at the top of the swing. By using your entire body to coil instead of just the shoulders, you'll increase power and, at the same time, promote an inside-out swing. 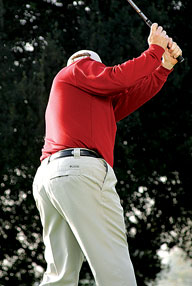 Myth 5 Tuck The Right Arm Close To The Body
It used to be standard procedure to instruct beginning golfers to keep their right arm close to their body throughout the backswing (for a right-hander). But while this type of swing may look neat and tidy, it limits what you can do with the club. Specifically, tucking your right arm close to your body severely limits the arc of your backswing, which is a great way to reduce power. But a loss of power isn't the only problem with this technique, as golfers with tucked right arms also tend to suffer from extremely inside takeaways, which can lead to numerous problems, including an over-the-top downswing path. Plus, getting your arms stuck too far behind your body in the downswing makes synchronizing the movements of the arms and body nearly impossible.

Jack Nicklaus is one of the best examples of a pretty good golfer who not only didn't tuck his right elbow into his body on the backswing, but instead actually let it fly. Not that you need to fly your right elbow, but getting it away from your body is a must if you hope to hit the ball with authority. Freeing up your right elbow will greatly increase the width of your backswing, producing a larger swing arc and substantially more speed and power through impact. Your accuracy also will improve, due to the fact that your arms will be more in front of your body, promoting a more on-plane swing.

Myth 6 "Finish High
The finish with the high hands myth might be the worst piece of traditional golf instruction to date. Of course, when you go back and look at pictures of many of the all-time greats like Jack Nicklaus or Arnold Palmer, you'll see high hands at the finish. You'll also see big-time reverse-C back positions that have left both players with a lot of pain. But the reverse-C isn't the only bad result of a high-hands finish. Other major problems caused by positioning too much weight on your back leg at the finish are inconsistent contact and reduced power._Ê_Ê

Instead of hands high in the finish, I like to see a significantly flatter position that encourages stable posture and a much more comfortable and healthy position for your back. This more rotational type of finish encourages the hips to turn through impact, which increases clubhead speed and brings the club more on-plane. A proper release of the right side of the body through impact is also more likely to occur, which reduces the need for excessive arm and hand manipulation. Plus, your swing will simply look and feel better with a flatter finish._Ê
_Ê
Senior Instruction Editor and PGA pro Brady Riggs teaches at Woodley Lakes G.C. in Van Nuys, Calif. Special thanks to model Michael Young.