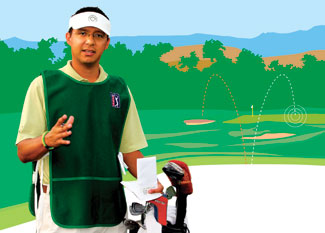 As a golf instructor and PGA Tour caddy, I’ve seen my fair share of golf swings, ranging from the sweet rhythms of the best players in the world to the herky-jerky moves of the frustrated first-timer. Yet despite the huge gap in natural ability between the novice and the professional, I’ve learned it’s not uncommon for the world’s elite players to struggle with a few of the same mechanics and course-management issues that a casual 18-handicapper might face during a round. The swings of touring professionals may be more advanced, but nobody is ever really immune to the occasional swing flaw or mental mistake. We’re all human after all.

What mistakes do top players make, and how do they fix them? Let’s take a quick peek at five of the more common physical and mental mistakes I’ve seen the best and the worst golfers make, as well as a few tricks that may help you become a better player.

#1 Play To Your Strengths
Even though PGA Tour players can easily work the ball in any direction, in most cases, it’s usually best to stick with whatever shot comes naturally—no matter where the pin is on the green. In this case, the pin is at the back left part of the green. If I were caddying for a player who naturally hits a draw, I’d advise him to go right at the pin. If my player hits a fade, I’d most likely advise this player to hit the middle of the green and not try and force a draw. Secondly, I’d do my best to assess the slope of the green from the tee, and since this pin doesn’t favor a fade, I’d let my player know where the best spot on the green is for him to roll in a mid-range putt for birdie.

#2 Don’t Neglect Your Routine
Guys like Jim Furyk and Justin Leonard have notorious pre-shot routines that are often scoffed at by the casual observer who doesn’t realize the pressure these players face during competition. Truth is, every great player has a systematic approach to each shot. A pre-shot routine is critical to ensure a proper setup, which, in turn, dictates how the body is positioned during the swing. Better players know that the setup begins with the clubface and works its way up through the body—not the other way around! Therefore, before you address your body to the ball, set the club square to the target, the shoulders parallel, then the feet either square with the shoulders or slightly open. Many amateurs make the mistake of setting the feet first, which leads to manipulating the clubface angle and shoulder positions.

Lesson Learned: Pre-shot routines are key if you want to be consistent. Develop a routine you’re comfortable with, and remember to set the club first before the body. 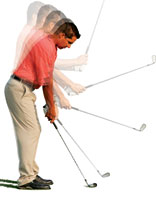 #3 Perfect Your Posture
Whether you identify with Ernie Els or Jeff Sluman, Tim Herron or Tiger Woods, having proper posture is critical no matter what body or swing type you have. Good posture leads to proper weight shift and a more fluid release through the ball. Many golfers make the mistake of losing their spine angle through the impact zone. If you lose the spine angle you set at address and strike the ball with a spine that’s too upright or one that’s too flat, the gamut of bad shots can, and will, occur. To practice retaining a correct spine angle, you have to first become conscious of it. I’ve seen some players on Tour during their practice session routinely check their spine angle by addressing the ball and then lifting the club in front of them at address (as shown). Although it seems simple, lifting the club in front of you helps you focus on your body position at setup. As you hold the club in front of you, remember to keep your back straight but not too rigid, your knees flexed and your spine tilted comfortably toward the target. From this position, with your spine tilted, lower the club to the ground holding that correct angle. Do this every few swings to make sure you remember not to address the ball too upright or too flat. It will make a huge difference.

Lesson Learned: How you address the ball dictates how your entire swing unfolds. Take your time, and get used to maintaining correct posture before, during and after you hit the ball.

#4 Move On!
At the highest level of competitive golf, it’s usually the mental game that separates the winners from the losers. I’ll tell you this, too—there isn’t a player on the PGA Tour who isn’t trying to win every tournament he enters. Anyone who assumes some players are out there to coast from tournament to tournament is mistaken. Every guy wants to win, and it takes a winning attitude to have a chance. Also, it’s just as important to acknowledge that you’ll occasionally hit bad shots, and luck may sometimes work against you. Here’s what the pros do. Immediately after a bad shot or an unfortunate event, most players allow for a few seconds to complain, walk briskly or drop a club (okay, some mash it into the ground). Once that mini-tirade is over, they move on. It’s over and done with, and it’s now time to focus on the recovery shot that lies ahead. Harnessing frustration is never a good idea, nor is it wise to reflect too much on the mistake you just made. Often, when a caddy notices a player in mental turmoil, he’ll bring up a topic, such as family, sports, music, movies—whatever—all with the intention of getting the player to not focus on an error or on trying to force an immediate recovery. This strategy can work well for you, too.

Lesson Learned: You’ll find a calm mind is far more effective than one bogged down in anger. Winning is a positive state of mind. 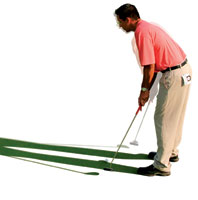 #5 Shadow Putting
You don’t play on the PGA Tour unless you’re a great putter. Where some Tour players tend to err isn’t so much with mechanics, but in other ways, such as keeping the eyes off the putterhead and maintaining a steady rhythm. My player, U.S. Open champ Steve Jones, uses a simple drill (that he can do anywhere) that kills these two birds with one stone. First, turn your back so it’s square with the sun so you cast your shadow in front of you on the green. While watching your shadow, make a few practice strokes until your body starts resembling a metronome or a “tic-tock” clock. This will help you to keep your eyes off the putterhead and your body during the swing, as well as aid in promoting a smoother stroke.

Lesson Learned: If you feel like your rhythm is off, take a step back and relax by emulating a metronome. Trust me, it works!

In addition to being a professional caddy for 1996 U.S. Open champ Steve Jones, Flavio Castro teaches golf to players of all abilities in Southern California.